Despite the neighborhood’s affluence, there’s plenty of down-to-earth charm to be found here

A melting pot of international residents, in part due to the large number of embassies in the vicinity, and an eclectic blend of independent shops, beauty salons, bars and eateries create a laid-back village ambiance to Azabu-Juban and the surrounding area.

Despite the neighborhood’s affluence, Azabu-Juban still retains a sense of historical charm with many of its shops boasting deep roots. Grab a taiyaki from Naniwaya, the original maker of the sweet bean-filled, fish-shaped treat with a history going back to 1909. Or opt for a custard cream-filled imagawayaki (a dessert with pancake batter and sweet filling) from the popular Tsukishimaya, which has been around since the 1950s. The neighborhood also has one of the few onsens left remaining in Tokyo: Azabu Kokubisui Onsen Take-no-yu. The Minami-Azabu establishment has been keeping locals clean since 1913 and the mineral-rich waters, which have an unusual dark brown hue, are said to work wonders for the skin. A short walk away in Moto-Azabu is Tokyo’s second oldest temple, Zenpukuji, which in 1859 became the US’s first legation in Tokyo. It also has Tokyo’s oldest (750 years) ginkgo tree within its grounds. Fans of Sailor Moon will enjoy spotting familiar sights from the hugely popular anime: the main entrance to Azabu-Juban Station, Hikawa Shrine in Moto-Azabu and Patio Juban – an open, leafy spot for relaxing and people (or fancy car) watching. The latter has a small statue of Kimi-chan, the tragic child from the Japanese nursery rhyme “Akai Kutsu” (Red Shoes) penned in 1922 by Japanese poet Ujo Noguchi, and includes a small collection box for UNICEF donations. Along and off from Azabu-Juban’s main shopping street, there are plenty of other small sculptures produced by domestic and international artists reflecting the area’s diversity. For something a little more unusual, pop into Kaleidoscope Mukashi-Kan and marvel at an exquisite collection of kaleidoscopes. These aren’t kids’ toys, with many of the beautifully crafted pieces carrying fairly hefty price tags. A Taste of Home

It should come as no surprise that an area with such an international community has an impressive number of ethnic dining options. If the weather is good, grab a window seat or a spot on the terrace at Greek Taverna Milieu for some Mediterranean fare. Alternatively, go for an early lunch at Savoy Azabu-Juban. The pizzeria’s lunch set may only have two options, Neapolitan-style margarita or marinara, but they are up there with the very best and sell out fast. In the evening, taste the love at Soul Food House. The hearty meals here will leave you wishing your stomach was twice the size so you could savor as many of the lip-smacking menu offerings as possible. The warm and friendly environment makes for a great place to enjoy authentic American Southern and Cajun cooking along with some cracking cocktails. There are plenty of Michelin-starred restaurants to splurge on too, including Azabu Ichigo, currently the only oden restaurant to receive a star. Be sure to bring some heavy-duty carrying bags along with you to stuff full of good grub. Nissin World Delicatessen in Higashi-Azabu has long been a popular supermarket for many an expat looking for a taste of the familiar. Frozen turkeys are in stock for the holiday season should you have an oven large enough to accommodate the bird. More frozen goods can be found at Picard. The French frozen food specialist is great for stocking up on essentials plus more uncommon delicacies such as escargot. Adjacent to the store is Bio c’ Bon. Chock full of organic goodness, the supermarket is a great spot to pick up freshly made sandwiches and salads to take away or enjoy at the large communal table. 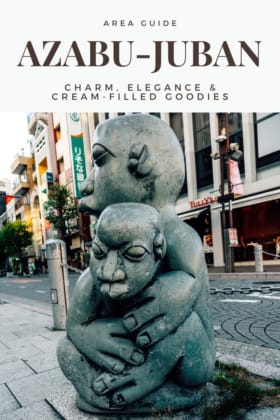