What better way to celebrate an engagement than spending a late afternoon taking “usfies” at an abandoned amusement park? This inspiration is what drew Anna and her fiancé Max to Nara Dreamland, a theme park that had gone to seed a decade earlier.

The park was the brainchild of businessman Kunizo Matsuo, who visited Disneyland on a trip to the US in the 1950s. After witnessing the popularity of Disney’s then-new creation, he hit upon the idea of bringing the Magic Kingdom to Japan – specifically, to Japan’s very first capital city, Nara. Matsuo got in touch with Walt Disney, the two parties appear to have struck a deal, and some of the engineers who had been involved in the original Disneyland were brought in to consult on what could have become the Happiest Place in Japan. 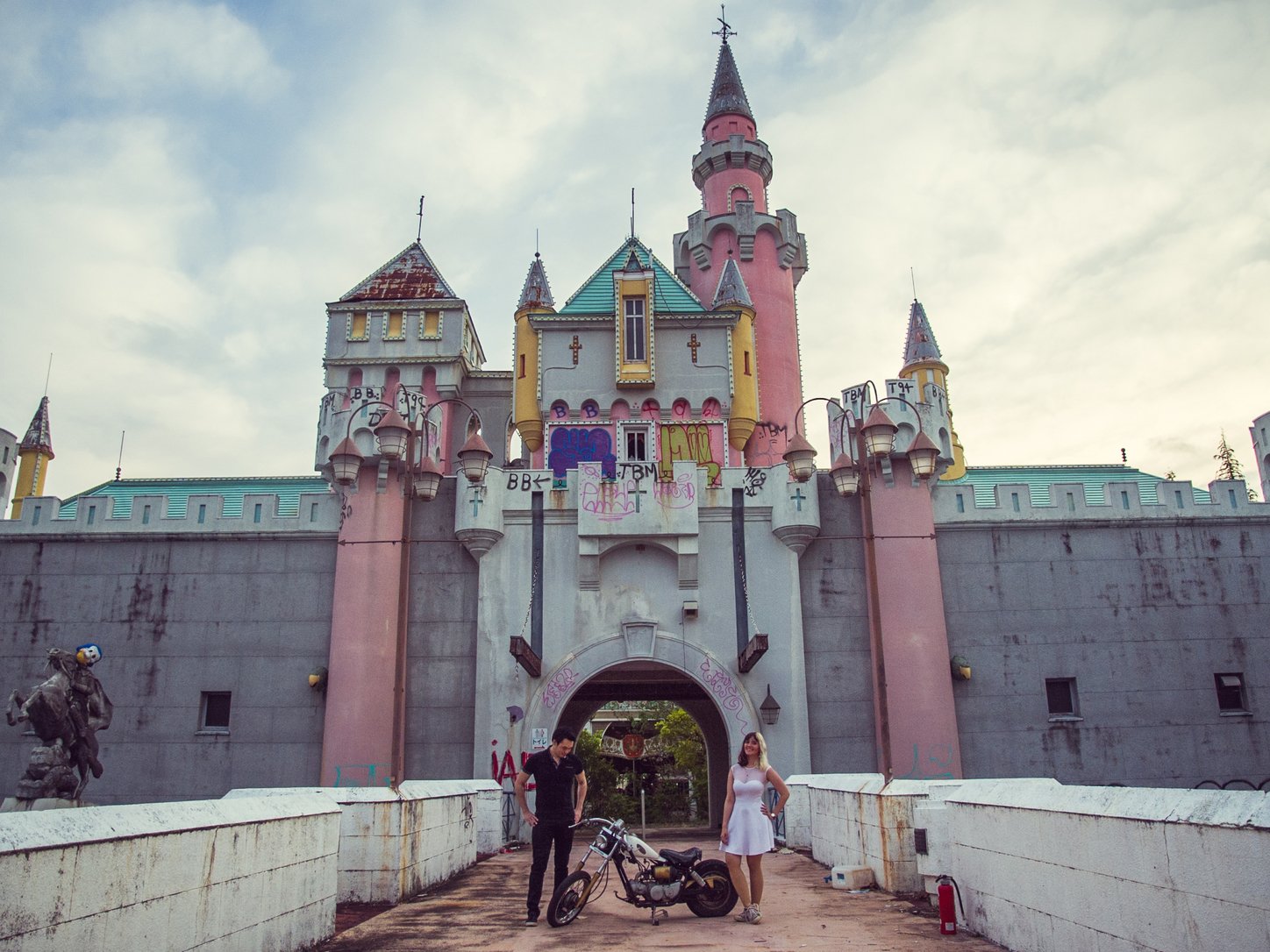 But before work was completed on the new location, Disney and Matsuo came to a sticking point on licensing and franchising terms, and the deal fell through. In addition to paying for the help from Disney’s engineers, Matsuo Entertainment Company had to come up with their own original characters that would greet guests at the park that opened its gates in 1961. So, instead of Mickey and Minnie, it was say hello to Ran-chan and Dori-chan, two forgettable little tykes dressed in soldier suits and bearskin caps.

While the Disney crew was nowhere to be found, Dreamland did bear a striking resemblance to that Magic Kingdom in Anaheim, California. And it was pretty popular in Japan, drawing more than 1.5 million visitors a year when business was at its best. A second Dreamland, this one in Yokohama, was built in 1964. However, by the late 70s, the requiem for the Dreamland was being composed: the Oriental Land Company was in talks with Disney to create what would become Tokyo Disneyland, which finally opened in 1983.

Tokyo Disneyland took a toll on Nara Dreamland’s popularity, but about a million guests were still making it there every year in the 80s. It wasn’t until 2001, when Tokyo DisneySea launched and Universal Studios Japan began action in nearby Osaka, that the nightmare really began. Attendance dropped to 400,000 visitors a year, shops at the amusement park began to close, and rides started showing their age. Nara Dreamland was finally shuttered in 2006 (Yokohama Dreamland had closed four years before), the owners of the park stopped paying property taxes, and the ill-fated amusement park became the property of the municipal government.

In the decade that followed, Nara Dreamland became a mecca for lovers of haikyo (abandoned buildings) who were willing to brave two layers of chain-link fence topped with barbed wire, security patrols, and stiff punishments that were handed out to trespassers (hefty fines, and potential visa “complications” for foreigners). A steady stream of daring shutterbugs made their way to the park, and the photos started making their way around the internet. Anna first heard of Nara Dreamland about five years back: “I saw one of those Buzzfeed-y style lists of ‘the most interesting abandoned places in the world’ and on the list were places you’d never want to go, like Chernobyl; places far enough away that I could never feasibly reach them, like the Wonderland in China’s Chenzhuang Village; and places long destroyed, including Gulliver’s Kingdom near Fujisawa. Then, finally, I saw ‘Nara Dreamland.’ To my delight, some Googling showed me that it was within Nara city limits, certainly not yet demolished, and, better yet, there was tons of information online about how to access it.”

“Particularly in Japan, abandoned places are fascinating because of the care that we know people put into maintaining businesses while they were active”

Although she’s not a haikyo hunter, Anna is a professional photographer who recognizes the allure of these left-behind places, in both rural areas and in the heart of the biggest city on Earth: “My friends and I have explored parts of Fukushima (not the regulated areas that are unsafe due to radiation), Gifu, Odawara, and even Sagamiko Lake, which all had buildings left behind, from bowling centers to ice cream shops and boat harbors. Even walking through Tokyo you can come across an alleyway that you can imagine was once a hideaway of little bars, but is all boarded up. Particularly in Japan, abandoned places are especially fascinating because of the care that we know people put into maintaining businesses while they were active; to see them left at a standstill, even while the rest of the city moves on, is always so interesting … It feels like a lot of heart was left behind, in a gut-wrenching manner.” Since reading about it, Anna continued to follow up on news about Nara Dreamland. She knew that there were plans to demolish the park, and she and Max had plans to return to the US. “I knew my window to safely get inside was opening up slowly, but would snap shut altogether very soon … With weeks left on our visas, and enough money to cover us in case of emergency, I pored over maps and blogs for tens of hours (my fiancé can vouch for that!) as I did not want to simply ‘bust in’ and treat it lightly. I still wanted to do it carefully.”

On a late afternoon last May, when the couple finally made it to Dreamland, there were plenty of nerves, which were – appropriately, perhaps – accompanied by a funhouse atmosphere: “[At first] we panicked over every small noise, and even ducked into a shed for nearly 20 minutes before we realized we were simply being paranoid. We also realized the voices we heard inside were not security at all, but at least two dozen other ‘tourists’ inside at the same time! We came across a family, another couple, some brave souls climbing the Matterhorn, people hiking up the roller coaster, and other wanderers – even a girl who had honestly walked right into the park, not even aware she wasn’t supposed to be inside at all … There were some sites we had wanted to see but never got the chance to, as we had gone in around sunset, and it was getting dark – fast. When the sun finally set, we took off sprinting like madmen, but couldn’t stop laughing once we were out!”

In the long run, Anna and Max got in – and out – just in time. “Not a month after we left did they bulldoze the huge wooden roller coaster that had once been the pinnacle of Japanese theme parks. We also couldn’t help feeling a bit of pride, getting in during the final moments that it stood. We will certainly cherish the photos, which help us tell a great story! These photos are not nearly as glamorous or pristine as an average engagement shoot, but we are pretty proud of what we managed to capture, and feel that their rawness represents us: someplace new, someplace old, someplace we shouldn’t be, hearts pounding, nervous smiles and all.” Photographs by Anna, and Casey Hawkins

This feature appears in the May 2017 issue of Tokyo Weekender magazine.