Japan’s Peter Pan Complex: As Tokyo Disneyland celebrates its 30th anniversary with a “Happiness Year“, one woman reflects on a nation’s obsession with the Magic Kingdom

Before I set foot in Japan, it had been a long, long time since I had ever really thought about anything even remotely Disney related.

Now don’t get me wrong, as a young girl of seven or eight I was the biggest mermaid loving, princess wannabe there was. I spent entire weekends refusing to wear anything but my Sleeping Beauty costume, complete with wig and magical wand.

I watched Aladdin on a loop for days on end. And, when my dream was finally fulfilled and my parents took me to Disneyland in the US, I truly believed that it really was the most magical place on Earth. And so, after the vacation was over and I arrived back home to rainy old England, I waited patiently at the foot of my bed for Prince Charming to come and rescue me and whisk me away to a magical kingdom in which I could live happily ever after and while away the hours combing my hair as little bluebirds flew around happily carrying out all my day to day chores.

But as time passed, alas there was no prince to come and rescue me and as I grew up I slowly began to come to the realization that I no longer wanted to be a princess.

They were pretty boring after all. I’ve never seen Cinderella fly to the moon or win a Pulitzer. Hell, Ariel got a whole new set of legs and the best she could do was shack up with that airhead Eric and spend the rest of her life pushing out little baby princesses? No thanks. 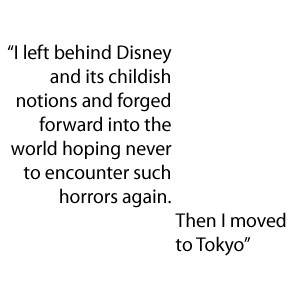 As a true woman of the modern age, I came to realize that the goals and aspirations that were glorified by my former idols were at best shallow and at worst downright degrading.

I didn’t want to spend my life doting on my heroic prince. And as for kissing frogs, well, I kind of liked it.

And so it went that like every other girl I knew, I left behind Disney and its childish notions and forged forward into the world hoping never to encounter such horrors again. Then I moved to Tokyo.

In the first few weeks, it was only the little things I noticed as being slightly odd – a grown woman with a Minnie Mouse keychain or a group of twenty-somethings wearing Winnie the Pooh T-shirts with a seeming lack of irony.

What on earth was going on here? And then one night, all the pieces of this slightly bizarre puzzle came together. I was out drinking with a couple of girlfriends when one of then tells us that her oh-so romantic boyfriend was taking her to Tokyo Disney Sea for the weekend. Naturally, I burst out laughing. How ridiculous!

A grown man taking his grown up, intelligent girlfriend to spend two days taking pictures with underpaid actors in sweaty old costumes before riding off into the sunset together. What a jerk! But wait – as I scanned the dinner table I realized that all eyes were on me, not her. And no one else was laughing.

Since those early days, I’ve learnt to keep my mouth shut whenever it comes to anything Disney because in expressing my horror that a grown woman could still be interested in what I consider to be such an outdated institution, I’m inadvertently judging what for many young women in Japan is still a very valid aspiration.

After all, for what other reason would those garish, puffy wedding dresses and hideously fake wedding venues be so popular? It turns out, being a princess is still very much the trend du jour. Whilst some girls completely agree with my unwavering skepticism about what I consider to be a childlike fantasy, for many I am seen as a sad, bitter woman destined to be a wicked witch poisoning the minds of an optimistic youth with my big red apple of rationality.

After much introspection, it looks like, at least in the near future, I will have to continue to politely decline those spur of the moment trips to Tokyo Disneyland purely because my idea of fun does not include waiting in line for two hours to get a photo of some poor boy suffocating in his costume as he pretends to adorn my foot with a glass slipper.

And while my girlfriends continue in the relentless pursuit of the big pink wedding before galloping off into the distance with the man of their dreams, I’ll stay at home and have a much better time spending the night drinking and hanging out with the frogs and the ogres.

After all, life’s an adventure and I can’t think of anything worse than living happily ever after.

Emma Brooke is a British writer living in Tokyo.