Few members of the Japanese Olympic team will be under as much pressure as Kosuke Kitajima and Homare Sawa at this summer’s Games. In fact, they go in to the event as the two most recognisable faces from a country hoping to improve on its nine-gold-medal haul in Beijing four years ago.

Kitajima (above, left) is the most successful swimmer Japan has ever produced. He won gold in the 100m and 200m breaststroke at both the Athens and Beijing Games (pictured below celebrating his breaststroke gold in China), and will be aiming to do the same in London after finishing first in the national qualifiers.

Sawa (right) captained the national women’s football team to glory at the 2011 World Cup – Japan’s first ever win claimed with a dramatic penalty shoot-out victory over the USA – and was later named the FIFA woman’s world player of the year. The next aim is to lead her side to gold in London.

Coca-Cola Aquarius, an Olympic worldwide partner, hosted a press conference for the two stars recently and both were in buoyant mood as they continued their preparations. “My motto,” Sawa says, “is not just to dream but to make those dreams come true. We want to deliver. The pressure is getting bigger but I keep saying to myself ‘I can do it’ and in order to realise our goal, it is very important to keep high standards during our daily practice sessions.”

Kitajima is just as focused. “We have less than 100 days before London. I really want to deliver a truly great result. I spend every single day practicing for this and I don’t want to regret anything. There will be no excuses if I fail. I will show you. I will do it.”

It is this level of determination that makes Kitajima stand out as an athlete. He may already be a multiple gold medal winner but he wants more. “There is no time to think about the past. My goal is to get gold again, I am focused,” said the 29-year-old, who popularised the phrase “cho kimochi ii,” (I feel so good) after he edged out Brendan Hansen to win the 100m breaststroke final at the 2004 Olympics in Athens.

Sawa no doubt experienced similar feelings after Japan’s win, in Germany, last year. It was at a particularly poignant moment following the devastating earthquake only a few months earlier, but there was then little time to dwell on their success, as Olympic qualification would soon begin. 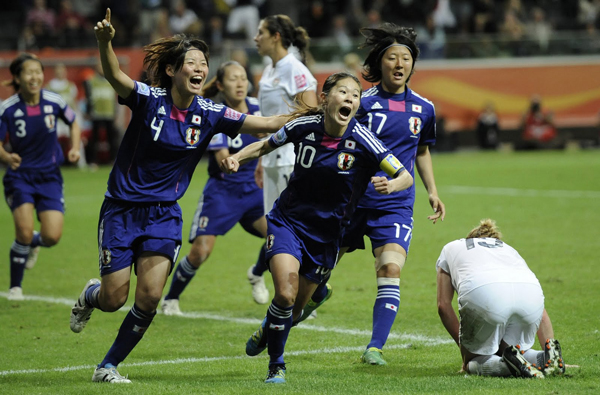 “We didn’t have time to rest after the World Cup final and had five matches in 10 days in order to qualify for London,” said the ‘Nadeshiko Japan’ playmaker, who has scored a mind-boggling 80 goals in 176 games for her country. “It wasn’t an ideal situation. We were all tired and stressed but thanks to great teamwork, we achieved it.”

Adding a gold medal to her illustrious list of honours would cap a remarkable couple of years for the 5ft 4in star. As well as standing alongside Lionel Messi to pick up her world player of the year award, she won the golden ball (best player) and the golden boot (top scorer) at last year’s World Cup (the shot above was taken just moments after they won it). They were both remarkable achievements but for Sawa, standing on that podium in London with her team-mates would mean far more than any personal accolades. At 33, this may be her last chance to win a gold medal.

It is also likely to be the last Olympics for Kitajima. He had considered retiring after the 2008 Games but a passion still burns within. His form has suffered a little in the past few years, but his performance at the national championships in April showed he is back to his best. His time of 58.90 seconds in the 100m was a Japanese record, while in the 200m he clocked 2.08.00, the fastest time in the world since special swimsuits were banned in 2010. His battle with Norwegian swimmer Alexander Dale Oen will be one of the most eagerly awaited contests in London.

Homare Sawa has a lot of confidence in her fellow countryman, stating that she was “sure he would make it a third Olympic double.” She clearly has a lot of respect for Kitajima, and the feeling is mutual. Both have already achieved so much in their respective sports, and it would come as no surprise to see them celebrating again in London.