Nirvana New York is not your typical Indian eatery. Aside from a fine selection of curries, there is a wide variety of vegetable dishes, some delightful desserts and an artistic interior that gives it an almost French feel.

Situated in Roppongi’s trendy Midtown complex, Nirvana will celebrate it’s fifth anniversary in Japan this June but for owner, Warren Wadud, there is still a way to go before they reach the kind of level he expects.

“We are not there yet. I consider this to be a journey. Refinement is the key word for me but we need to keep pushing boundaries to achieve that,” says Wadud. “My dad was all about trying new things and I am the same.”

He is determined to follow in his father’s footsteps and create a fine dining experience that will get people talking. Back in the seventies and eighties, his parents’ restaurant, of the same name, opposite Times Square in New York, earned legendary status.

On the opening night in 1970 George Harrison of the Beatles and India’s most famous sitar player, Ravi Shankar, turned up. A host of celebrities followed, including members of the Rolling Stones and Led Zeppelin; the restaurant is even featured in Led Zeppelin’s biography, Hammer of the Gods.

Unfortunately, the original venue had to close in 2002 because of a collapsed wall but Warren is trying to recreate the spirit of those times in Tokyo. His business partners have, on occasions, been a little cautious about some of his suggestions. They do however give him freedom to experiment. There was some initial skepticism about his idea to showcase the work of local artists in the shop, but they went with it and it has been very well received.

“Nirvana was never destined to be a regular Indian restaurant,” he says. Looking around the place you can see what he means. As well as the art on the wall, there are charming cushions that appeal to female customers and an outdoor terrace with comfy sofa seats and a great view. 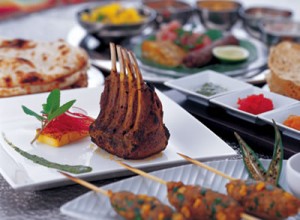 The food is also different to what you would expect from an Indian restaurant. Wadud believes that “spices should enhance the natural flavours of an ingredient, not simply cover it.” He wants to create a “lighter eating experience and move away from the preconceived notion of ‘curry in a hurry’.”

Dinner courses start at 6,000 yen but it is the lunchtime buffet that we most highly recommend. There are four types of curry and a choice of rice or naan.

What makes Nirvana stand out, though, is its large salad bar, something you rarely see at this kind of restaurant. There are also plenty of desserts to choose from as part of the ‘all you can eat’ plan.

With crowds flocking in, it would be easy to continue on the same path. That is not what Nirvana is about. Constantly looking for new ways to please its customers, the restaurant will launch a new menu next month that will incorporate dishes from all over India. It won’t be easy but it is a challenge that Warren Wadud is certainly looking forward to.