Perched above a street corner in Ebisu, Fish House Oyster Bar is a uniquely simple concept in Tokyo: the freshest, top quality oysters and fish — I couldn’t wait.

The lively second floor restaurant has the unpretentious feel of a European seaside cafe with simple  décor and a menu to delight seafood fans. Open for less then a year, the cozy restaurant accepts online reservations, so booking a table is easy. The oyster map/menu shows where owner chef Toshihiro Matsushita sources his shellfish, the selection of which is not limited to pacific varieties of Japan. During my visit Irish oysters were a guest on the menu (one for ¥380, six for ¥2,250).

As with other seafood restaurants, the menu was prefaced with a warning. Chef Matsushita asked me if I could handle raw food beforehand — not a problem for those who have lived in Japan for a while. First up, the signature freshly shucked, raw oysters. The taste was as good as it gets and slid down easily in one gulp. Oysters don’t really need any sauce, but a choice of pink salt, horseradish, cocktail sauce and lemon complemented the shell fish well.

The chef followed up by serving the restaurant’s second speciality, baked and broiled oysters. One was pure simplicity, baked with minimal seasoning (¥740), and the other, broiled with seaweed, cream and a hint of yuzu (¥940), a steaming hot luxury. First timers will welcome the contrast between the raw and cooked varieties, the flavors are markedly different from each other. After the oysters, we came back to earth with a light fish and scallop terrine (¥840), illustrating Matsushita’s education in French cooking that he acquired abroad.

The bar stocks a wide range of drinks to partner with oysters, and making a choice can be difficult but staff are quick with a surprising range of recommendations: Mimosa for Japanese oysters (¥800), black velvet for imported oysters (¥800), Laphroaig and soda for Irish oysters (¥840) or dry sherry for just about anyone of them(¥750). A real classic dish followed, a hearty, creamy clam chowder, a great choice for the colder months. The original New England clam chowder is said to be thickened with Navy sea biscuits or hardtack; the Fish House version (Half ¥740, Full ¥980) was served with dry crackers and warm foccacia (¥200 extra), for those wanting to add extra thickness or crunch. The menu also features classics like fish and chips, pasta and a deliciously sizzling paella. With all these aromas you could almost be sitting next to a harbor — not in central Tokyo.

European – Dorset/Belon Oyster (Ostrea edulis)
Round, Expensive, Symetrical. Best eaten raw. Only available during months with the letter ‘R’, during the summer they spawn, causing poor flavor and texture.

Portuguese Oyster (Crassostrea Angulata)
Not as delicate or expensive as European oyster, both shell and flesh often feature purple streaks.

North American – Eastern Oyster (Crassostrea virginica)
Bred from Prince Edward Island to the Gulf of Mexico. The most popular oyster in the US. Varieties from Massachusetts to Florida differ in color and taste.

Pacific Oyster (Crassostrea Gigas)
Can grow up to 12 Inches, though often too tough to be eaten raw off the shell. 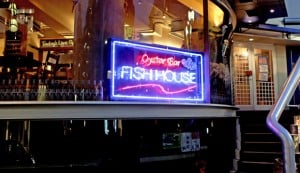