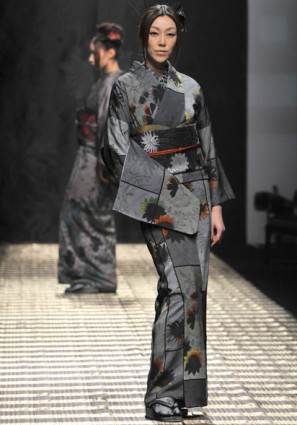 By its very definition, the kimono evokes ideas of tradition. Steeped in history and culture, this type of garment has been worn by men, women and children in Japan since roughly the eighth century. But since the late 19th to early 20th century, the popularity of kimonos as everyday wear has been steadily declining, to be replaced by Western clothing. These days, as any Tokyoite would know, it is rare to see Japanese dressed in kimonos except on very special occasions, and even then many still choose an evening gown or tuxedo. Kimonos have been largely relegated to storage, only to be taken out and utilized once in a great while.

But there is one man who is out to change this. Jotaro Saito is Japan’s most prominent modern kimono designer, and he is making waves throughout this very traditional industry. The third generation in a family of kimono designers, Saito was literally born into Kyoto’s textile and garment world. “I always thought I would end up doing this,” he says. “I never thought I had to do it for the sake of my parents, but I just came into it naturally.”

Before joining his family’s company at age 20, Saito spent about five years designing his own women’s (Western) clothing line, called Otias (which, incidentally, is Saito spelled backward). While he may not have known it at the time, this experience actually paved the way for certain aspects of his later work. For example, he is now the only kimono designer in Japan to regularly hold runway shows for his collections. “Because I did Western clothing, it’s much easier to put on shows—I know everyone [in the business],” he says. His latest fashion show took place at Tokyo Midtown in March, during Japan Fashion Week. Although the kimono market may be a niche one, his popularity was undeniable when, at the end of the show, fans crowded the runway, bestowing on Saito large bouquets of flowers and other gifts.

But this popularity is still a limited one. Saito admits that even in the 20 years he has been designing kimonos, the size of the market has shrunk dramatically. “People think that as long as they have just one kimono, they’re safe,” he says. “If something comes up, they have one to wear.” Even so, he is trying to change this way of thinking and bring kimonos back into the mainstream. Rather than keeping them in storage until a special occasion, Saito wants young Japanese to think of kimonos as an option for going to work during the week, or shopping on weekends. And despite the overall decline in the market, he is starting to see more interest in kimonos amongst well-traveled Japanese.

“As more and more Japanese people go abroad, they start to realize how interesting and wonderful their own country and culture is,” says Saito. Many of his customers, he says, have lived or travelled extensively outside of Japan, and being removed from their heritage often incites a newfound interest in it. Most Japanese, he says, aren’t very in touch with their own culture and history, but leaving Japan for some time often changes that.

In order to help bring kimonos into the 21st century, Saito designs textiles and patterns that are decidedly modern, resulting in very chic, stylish garments. “Traditionally in a flower pattern, the leaves would be green and the flowers red or pink,” he says as he shows off one of his kimono fabrics, a beautiful woven silk with a floral pattern in many shades of cool gray. His latest collection also includes kimonos made from Japanese denim, which he says have been very popular so far. To further juxtapose the traditional with the modern, Saito even included tiny rivets (like those seen on any pair of jeans) at strategic points along the kimono’s seams.

If he’s going to popularize kimonos among Japan’s younger generation, Saito definitely has his work cut out for him. At about ¥400,000 for a silk kimono and obi or ¥60,000–¥100,000 for a cotton yukata, investing in a traditional Japanese garment is not something one does lightly. But with Saito’s knowledge and experience backing up his sheer passion for the industry, he may just be onto something.

Jotaro Saito sells his designs from a store along Roppongi Hills’ Keyakizaka, online through his website, and at department stores and kimono shops throughout the country.