The trouble with healthy eating is that often you eat less; either that or the food favors lo-cal with hi-price. So let me take you instead to the Yunnan province of China, that like its neighbouring Vietnam, is similarly replete with plants, many noted for their medicinal properties. And now you can find them here too. There are many Chinese restaurants in Tokyo, but Gozenbo is that only one that takes its menu straight from Yunnan to give healthy food without meagre or meat-free portions. As restaurant-owner Xu Yaohua states, ‘medicine and food from the same source’—suggesting the more you eat, the better you feel. I did my best to oblige.

Vegans may squirm at sucking out prawn heads, but this is the best way to extract those crustacean sensations in the lush amuse bouche we had. The rest of the body had been soaked in Yunnan shokoshu and joined medallions of chicken and duck eggs, slippery pork thighs and beef aspic, while ginseng was also on hand to aid your circulation. But it helps to know kanji too—how else to realise you are eating fragrant ‘fist of tiger’ mushrooms? These first appeared in a dish of shredded tofu before scattering themselves throughout the meal. If characters evade you, however, then in the best tradition of Chinese restaurants there is an order-by-numbers system, 134 options in all.

Number two for us was an exquisite small consomme, a vial of transparent secrets only revealing their fowl source in one’s mouth. Herein lay soft pebbles of chicken streaked with black quartz-lines and gastrodia elata (orchid roots) to dampen the dizziness the wine list promises. Confounding every effort of mine in the kitchen was the succeeding plate of shrimp mildly salted, served with cucumber and tea-leaves. Whenever I churlishly toss cucumber into pans, inverted alchemy occurs and I am left with melancholic slugs. Not here. Gozenbo offers the fine stuttered crump of a perfect prawn teased with slightly bitter tea. Personally I would have used more salt—but then I am the one who cannot cook cucumber.

There is an illusion when eating at Gozenbo, as to the eyes so many dishes fit the preconception we have of Chinese cooking, yet to the tongue it is distinctly Yunnan. Our next plate illustrated this by camouflaging itself as one I happen to have most weeks for lunch—but my local Chinese does not use Yunnan ham. Try taking Parma ham and aerating it to a firm meaty pumice before cloying it with oyster sauce and oh-so tender bamboo. It is the kind of ingredient that pauses conversation as one realigns expectations and the flavor-scale—lucky then that we took a bite at the same time. Reminding me that I ought to do a tally of how much I eat was the next dish, this time stirring soy through longan-like cubes and earthy carrot blossom, with stray pellets of chicken that had been seemingly glazed in sun-dried tomato dew.

Again another plate, and so I hoped the food was doing me good for the quantity I was eating. This one stirred saffron to a light yolky sauce flecked with the red of its stamen to form a shallow moat around central steamed cod. A very delicate plate that mated fish with flower like none other I’ve had. Following it, however, was a slightly bleak soup that my co-diner liked though it garnered little enthusiasm from myself; a pale mosaic of tofu, pine nuts and peppers lubricated with the omnipresent corn starch. She argues that this brings out the flavour in many ingredients, but for me it numbs their texture.

Once this disappeared so a single homemade gyoza arrived in a small puddle of sesame oil and chilli sauce. The secret with eating these is to keep in the juice, so hold it up please when you take that first bite. I failed miserably as I tried to scoop up more sauce, remembering too late Aesop’s advice to dogs with bones. And finally, washing down the last straw of egg-fried rice was pu-erh tea, a fantastic blend of rose and chrysanthemum that dissected the oils and softened the stomach for the delicate dessert that followed; almond blancmange. And yet not, such was the garland of floral notes whispering in the mouth. It really was very good and joins the rest to astound in the sheer variety of ingredients on offer at Gozenbo. Not all of them are going to coax pounds from your paunch, but choose carefully and you’ll find an attractive alternative to the macrobiotic restaurants tempting those vegans. 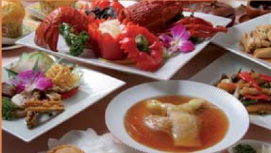 Best Table: No clear advantage, but none handicapped by kitchen/toilet proximity. Groups can be accommodated, while screens and strings keep things intimate.
Prices: Appetisers start from under ¥1,000 and side shes about twice that. A well-priced range of set menus start from ¥4,000 and rise to over ¥20,000 each, the topmost including lobster. We were particularly intrigued by the mushroom course for ¥10,500.
Location: A three-minute walk from Roppongi station. Just down a side street from Roppongi crossing on the Hibiya line, walking towards Azabu-Juban. 6-8-15 Roppongi, Minato-ku, 106-0032.
Contact: Open 11:30am-3pm for lunch, and 5pm-11pm for dinner. See www.gozenbo.com or call 03-3470-2218 for reservations.