Straight up the Namboku line and behind the Oji JR station is The White Fox, a small bar-cum-restaurant run by Brit Trevor Blythe, who has printed twenty years of experience on to two clean pages of tapas and otsumami. Starting innocently enough, our first plates were chorizo then smoked duck with capers that promptly arrived while the tuna and pork were prepared. Duck for me is my default choice if on a menu, but smoked with capers makes it more special, the chorizo is excellent too.

But it is when the tuna arrives that you begin to see what Trevor is capable of. Here was a neat turret of plump sashimi assembled like Jenga with splinters of green apple and sensational umeboshi dressing. I’m not particularly keen on this plum usually, but here Trevor mixes it with soy sauce and olive oil that is at once buttery and refreshing as it cloaks the fish from the burst of apple. It is delicious.

Most of the dishes are under Y1,000 and typically cooked to order while his wife Hiromi runs front-ofhouse, and we were chatting to her when the pork arrived: four perfect pyres of vivid green nanohana topped with Okinawa pork and tiny circles of onion. The flower of nanohana is typically found in oils, but Trevor buys it before it blooms, turning it into a broccoli-like puree that holds onto its wonderful colour—anything else would just grey. It rams a glob of vegetables towards your uvula as the sakura salt gently grazes the palette, its intensity of flavour a fitting metaphor for the compression of Trevor’s experience—something brought into focus last year when he won ‘Best Original Sushi’ from www.eat-japan.com for his mahi-mahi tataki.

As Trevor uses only seasonal food, he currently prepares duck for this dish in place of the fish. It sits on a tablet of rice speared with garlic, ginger, almonds and butter beneath a heap of kumquat and tapénade. At first the rice seems dry before it somersaults in your mouth, swamped by its damp headdress while you apprecaiate the bird. It is an extraordinary collision of tastes and textures that urge you to close your eyes to better see. And it is this and our concluding dark chocolate delight that summarises the confidence and experience Trevor has. Who else would use garlic and almonds to make chocolate taste more chocolatey?

If the location of The White Fox seems odd and the décor mundane, rest assured that Japan has in its hands the buds of a phenomenon. 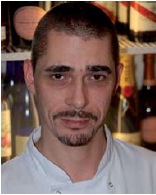 So what makes Trevor’s food so special? To find out, Weekender spoke with him inbetween mouthfuls. First thing to know is that he has worked at four three-Michel instar restaurants: two in England and two in France. Early in his career he worked in Britain’s oldest established restaurant, Rules, in Covent Garden, and Waldos, where he was part of the team that earned its first Michelin star before winning (another mouthful) the Academie Culinaire de Grande-Britannia Annual Awards of Excellence.

Tracking Trevor’s career through the nineties, he swayed between esteemed restaurants in Britain and France, collecting more awards on the way. It was when the decade closed however that he accepted an invitation to come to Japan to open the Barakura English Garden in Nagoya. It was a fitting steppingstone from his European background, and one that rolled into a book and TV programme on Japanese channel NHK two years later.

I’ve been holding off for a while to use the word ‘fusion’ to describe his food, as so often you need the ‘con’ prefix. Trevor avoids this though due to his considerable time in both Europe and Japan; he perfectly understands how flavours fit irrespective of location. It is this open-mindedness that led to the opening of The White Fox in late 2006, which has become a stage for him to express his culinary confidence—making it all the more surprising when you see such a modest venue.

Today he now rises at 9am to review the menu, preparing both lunch and dinner as deliveries arrive, before making frequent trips to Tsukiji to survey the latest piscine trend. His wife Harumi looks after the customers and the drinks—she previously supplied them to restaurants when they met. In his small kitchen Trevor is aided by the able Harue Yagi, herself a graduate of Le Cordon Bleu. The success of his fusion is shown by the customers, Trevor quipping that; “when you see the Japanese drinking wine and Westerners nihon-shu you know that it’s working.” Indeed Trevor makes the effort to write the menu and his website in both Japanese and English—something particularly useful when one is so often confounded by kanji calligraphy on bottles in bars.

Clearly The White Fox has potential to expand once its style is established, something that seems a quiet possibility given how many of his dishes could be magnified into a single main course. For now, however, Trevor has given Tokyo a tasting menu for even greater things to come.

For more information on chef Trevor Blythe and The White Fox, see www.thewhitefox.jp/index.html or call the restaurant on 03-6903-6696. 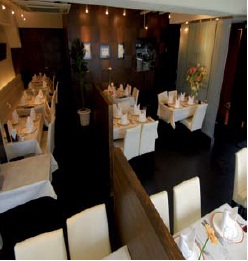 Word has been spreading recently among Tokyo’s international community about a curry house fast becoming a staple on the expat dining scene. Set on the third floor at the end of Hiroo’s shoten gai, you’d be forgiven for not noticing it’s modest opening which came after several years of research—the efforts of the staff and management do not go unmissed. To put it simply, the food and the service are impeccable and when both of these exceed your expectations, you’ll tell your friends and go back for more.

The interior is reminiscent of curry houses to be found back in cities like London or New York. Cool, dark wooden furniture contrasted by crisp white tablecloths and nothing more, makes for a sleek yet laid-back ambiance. Upon entering the only hint of its ethnic origin is the softly playing Indian music but once seated the hospitality is 100 percent Indian.

The extensive menu combines the regulars; kormas, jal farezis, masalas and of course tikka masala, with authentic vegetable and tandoori dishes. While you’re pondering over what to order you may spare a thought for the chef Negi, who arrives at the restaurant at 8am every morning to start preparing the day’s ingredients and will stay until midnight. Although he confesses that the vegetables available in Japan are not to his preferred standard as in India, his cooking is amazing.

For starters came the tandoori stuffed capsicum (¥1,600). Six pieces of scooped out capsicum stuffed with potatoes, cashew nuts and raisins, baked in a tandoor oven. The warm blend of spices leaves you content just like a home-baked comfort food can and at the same time alight anticipation for what is to come next. Next, was, the shik kebab (¥1,600). For this, minced chicken and lamb is chopped with ginger, garlic, and coriander, arriving on your table still in the skewer. As with every dish at Priya, there is a certain understanding of spices that other Indian restaurants have yet to master. If you’re in doubt of what a particular spice is doing on any one dish, I urge you to go ahead and ask the Priya team. You’ll be surprised at what they know.
For the main course, I had the palak paneer (¥1,400). This is a spinach curry cooked with homemade cottage cheese, herbs and of course spices. Sometimes I add mushrooms, sometimes chicken, but every time it’s a wonderful dish. Nan bread or basmati rice completes each meal—one of each would satisfy two people.

For Priya, the word is out. Read it here first before someone else tells you the same; you really must go. 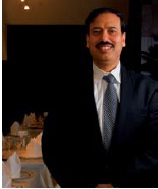 Restauranteurs really don’t come much nicer than Byomkesh Panday. It had been a few months since I’d last visited his curry house along shoten gai in Hiroo and yet was welcomed back like a longtime regular. Even more impressive, Mr. Panday (as always seems fittingly to call such a polite man) remembered the spinach curry I had ordered previously and asked me if this time too I would like the same again. Now that’s service.

Those familiar with the Tokyo curry scene will remember Mr. Panday from his time at the Taj Mahal restaurant in Roppongi. He worked there as manager for a dedicated 15 years and in which time he perfected his innate knack for hospitality. This is a man who anticipates your next drink, will bring out more nan, offer dessert with remarkable precision, and still have the time to stop and talk with guests leaving or arriving at the restaurant.

In May of 2007, it was time to move on and Mr. Panday along with his chef Negi (who he had worked with closely for 14 years), opened Priya Curry. With 30 years of combined restaurant experience in Japan between them (not counting the 5-star hotels they worked in back in India), the menu was designed around authentic north Indian cuisine and with it, they encompassed a legendary Indian dictum ‘Atithi Devo Bhava’ or in other words, ‘the guest is truly your god.’

In India, you see, to share food with your guests is an honor. (The poorest too are reportedly willing to share their meager foods with guests whether invited or not.) If the honor is on the host of the meal, maybe now you can understand why Mr. Panday is always smiling.

Despite his long-term residency in Japan, Mr. Panday explains the most difficult aspect of opening the new restaurant was securing the location and finding a guarantor. However he did succeed and the restaurant opened to old time friends and faithful regulars who made efforts to support him in his new venture, and who didn’t want to miss out on what was clearly destined to be a great Indian restaurant.

Priya has been open for a year now, and on any lunchtime or any night of the week the restaurant has a great turnout. Guests may be there to eat what was once described as “the best curry in Japan” or maybe they are there for the service. Either way, you can bet Mr. Panday is smiling.

For more information on Byomkesh Panday and Priya curry, see priyajapan.tripod.com or call the restaurant on 03-5941-6996.