Planning from afar: Going home for the big day

Even though we had been living in Japan for a year, there was no doubt in our minds that we would go back to the UK and get married in our home country. That way we could have a traditional wedding in my hometown and avoid the communication problems of doing it here—neither of us speak Japanese—on top of the usual challenges of organizing such a big event. This also made it easier for me as I didn’t have a visa in Japan at that time, and I didn’t fancy having our “amazing day” finalized unromantically down at the Ward Office.

We found, however, there were a few disadvantages of planning the wedding from afar. The time difference between Japan and the UK limited communication greatly. We depended heavily on the internet to view venues online, and had to rely on email rather that speaking with vendors on the phone. However, this method of communication did reveal some surprising benefits. We could view everything on the internet from the comfort of our own home, rather than running around the whole of Surrey. We were also able to sift and filter through many options, jot down  details of the best venues, and only visit the places that we really liked the next time we were home. Meeting these people only after researching them on the net saved us a lot of time.

Another disadvantage of planning while in Japan was dress fittings. This proved to be a problem as staff at the shop where I bought my dress from, was very inflexible and unhelpful. For example, despite flying back and forth from Japan for the fitting, the dressmaker was resistant on changing their schedule to accommodate my situation. Luckily, I found a dressmaker at another place to do all my alterations two weeks before the big day. So before you buy, question your dressmaker and make sure they are willing to be flexible for you.

Another matter to be aware of if you’re planning a wedding outside of Japan is your registered address. This only came to light about one month before our wedding day. In short, the vicar had registered us at our address in Japan and not my parents’ address in the UK. Since we were not in the Parish, we had to have special permission from the Archbishop’s faculty office in Westminster. It came to the point where we may have received just a blessing on the actual day. Apparently none of the guests would have noticed the difference, but you can imagine we were not amused! Ultimately, we were able to obtain the special license to be married, however, I highly recommend that enquiries about this be made in advance so that you don’t have to rush around like we did.

The last major disadvantage about planning our wedding from Japan was our dependency on friends and family back at home. We constantly asked our mums if they could pop along to a shop and have a look at things for us, and, if necessary, send us items in the post. We know they didn’t mind, but a lot of the time, we felt like we were imposing on them. To avoid this, i would advise checking out www.confetti.co.uk as their comprehensive website can help to get around this obstacle. 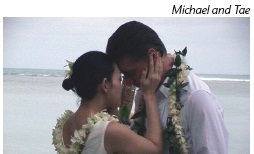 Although Tae and I consider ourselves to be spiritual people, we didn’t feel that a traditional Japanese or Western wedding suited us. At the same time, we both sincerely felt that this was a momentous event in our lives that needed to be marked by some sort of “formal” ritual.

During two trips to the North Shore of Kauai, we felt more spiritually connected with nature, friends and each other, than ever before. This made it seem like the ideal place to get married. The trick, however, was to find a ceremony that we felt was “real” as opposed to being touristy and “hollow”. The answer? A traditional Hawaiian wedding, complete with a local “shaman” priest.

In a traditional Hawaiian wedding, family members and nature play important roles. For example, although my mother passed away many years ago, our priest suggested I bring a photo of her with me for the “altar”. Our altar was to be a table set upon the beach at sunset, which would be adorned with special wedding leis: a large conch shell, a whole coconut (to symbolize mother earth and the nutrients she provides), a rather sacred looking triangular shaped rock, and banana leaves.

Highlights of the ceremony included: pouring seawater from the conch shell over each other’s hands to clean past indiscretions between us; the shaman priest opening the coconut with his rock  (I still don’t know how he did it); my wife and I nurturing each other from the bounty mother earth provides us (symbolized by our drinking of coconut milk); the priest asking us to dip our fingers into the coconut milk and placing some on my wife’s belly (she was six months pregnant at the time) to acknowledge and include our baby in the ceremony; making an offering back to mother earth and completing the “circle of life” by pouring the remaining coconut milk into the ground; holding our wedding ring in the palm of each other’s hands and asking everyone in attendance to clasp their hands around ours and give us their personal blessing/message for our future (serious tears did flow); and walking to the water’s edge, tossing each of the two halves of the coconut into the ocean and standing side by side in front of the sea, praying for our prosperity.

Food, drink, and accommodations were all easily arranged. The North Shore of Kauai is remote, but it’s Hawaii, after all. We booked an amazing, yet affordable, six-bedroom, beachfront villa straight off the internet. Top notch catering was provided by the head chef of the one and only great restaurant in Hanalei. Our Wedding license was easily obtained at Hanalei’s “City Hall”, which also happens to be the local hair salon.

The North Shore of Kauai is the most remote and difficult part of Hawaii to travel to and therefore, in my opinion, is best suited for small private ceremonies with close friends and family. For us personally, we couldn’t have imagined it any other way! Staying in Tokyo: And keeping it Western

Manuel is Australian with Colombian roots and I am Dutch; we met about seven years ago, in Tokyo. Since Japan is where our love story started and where our current home is, we chose to get married here.

As neither of us are Japanese, we felt that doing a traditional Japanese wedding would bear no meaning to us. Manuel and I wanted a spiritual wedding ceremony, but not necessarily in a church. We scouted several wedding facilities in and around Tokyo, most of which offered a standard two and a half hour package. To us, this was not an attractive option; we found it too commercialized with little options to make it a truly personal event.

We love nature, and so we decided to do our wedding outdoors, in the Hamarikyu Gardens. Being a public park, they don’t “do” weddings, but we were allowed to hold our own ceremony. In the end a typhoon washed the outdoor plans away, but we had a beautiful, intimate ceremony at the restaurant where we later also held the reception. Luckily the sun showed her face later and we were able to still go to Hamarikyu for photos.

Our whole wedding was custom made with the help from people that are close to us, which really added a special touch; my brother was our celebrant, our parents played a special role in the ceremony through a sake sharing ritual to symbolize the union of our families, my friends formed a ‘path’ instead  of a virgin isle. My sister in law is a make-up artist and did my make-up. All flower arrangements were made by my Godmother. The wedding favors were beautiful Japanese paper boxes that we filled with Colombian and Dutch sweets.

My dress was actually my mum’s dress that she wore on her wedding day, 40 years ago. It was made for her, by her mother, and I am so proud that I could wear it also. We remodeled it to fit me better, plus I wanted to add a Japanese touch. Mum and I searched and found the obi together, which we teamed with the dress as a waistband/train. It was just perfect!

One downside of holding the wedding in Japan was that some family and friends couldn’t be here with us. Also, we couldn’t have an ‘open-end’ celebration. In Tokyo that’s just not realistic unless you have a location with no closing hours, a big budget and no ‘last train’. 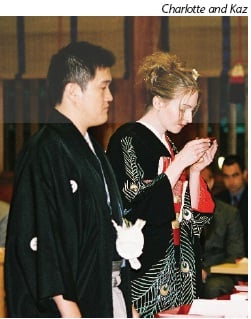 The Japanese touch: A Shinto ceremony

When you marry abroad and have relatives coming from the other side of the world, you start to feel like you should put on a bit of a show for them. It was partly with this in mind that we chose a Shinto wedding. The traditional Japanese wedding is nothing if not atmospheric—chanting priests, shrine girls bearing sake, gorgeous kimono—and I knew my guests would love every minute of it. Plus, as I said to a Japanese friend who was surprised I hadn’t chosen the Western “chapel” set-up, “If you were getting married in the UK, you wouldn’t want to do it in a kind of theme-park version of a Japanese temple, with some random Japanese person pretending to be a priest, would you?” If you’ve come from a country where beautiful old churches are everywhere, a plasterboard chapel presided over by a moonlighting gaijin dressed up in ecclesiastical robes isn’t really going to cut it. I’m not a Shinto any more than I am a Christian, but I did want a wedding that had a bit of connection with the country I was having it in. Anyway, most Shinto-style brides (including me) change into a wedding dress for the reception, so you still get a chance to play out your white-gown-princess fantasies.

We stated our preferences at a wedding bureau (Zexy), and were invited to tour eight possible venues. Some were lovely, others tended towards glitzy chandeliers, frilly, pouffy tablecloths and those funny white chair covers with the big bow on the back, which Japanese reception proprietors seem to be inordinately fond of. Booking at least nine months in advance is best. Contrary to what I expected, wedding planning—once we had settled the venue—was neither stressful nor time consuming, because it was all “on-site.” Although this can feel a little “tick-the-box,” when you are abroad and lack the backup support of people (read: Mum) to run around helping out, it certainly is handy to be able to sit at a desk, look at the reception catalogue and say “Yes, those flowers…yes, that cake…”

The big day itself was as lovely and atmospheric as I could have hoped, and my only regret is that my relatives were vastly outnumbered by my husbands. Still, I made up for it by having a “homecoming reception” at my parents’ house a few months later…and I even got a chance to wear my wedding dress a second time!