It’s not often that one can combine fine dining with healthy living (much less with the usual New Year’s resolutions to take better care of one’s self!), but at Gora Kadan, a luxury Japanese inn in the hills of Hakone, it seems that one can happily do both: eat well without adding too much calories or cholesterol.

For several decades now, Gora Kadan has been the last word in exclusive Japanese hospitality—and probably one of the most expensive as well (prices start at ¥100,000 per couple). You may be thinking right now  that a six-figure fee is certainly off-putting.  However, this ryokan is so full on weekends and almost everyday from April to November, that I practically had to beg the reservations staff, months in advance, for the “privilege” of handing over to them a significant amount of money for a two-night stay in the dead of winter. While this may sound crazy, I am certainly not the only willing one. Gora Kadan is so famous that both Japanese and foreigners book way ahead and travel long-distances just to experience at least one night of first-class pampering. In fact, I’ve never been there without bumping into a handful of other foreigners.

Each guest is served the same multi-course seasonal kaiseki dinner, which changes every month. As far as ryokan meals go, Gora Kadan’s courses are fuss-free and on the lighter side so you can almost feast away guilt-free, but everything is so exquisitely done that your eyes get full on the colorful spread long before your stomach starts to feel heavy. I’ve been in ryokan where dinner is accompanied by elaborate grills, flaming plates and fancy hot pots, and the table and I both groan from the weight afterwards. At Gora Kadan, the only thing elaborate is the pottery; while the taste of the food is simple but, happily, seasoned enough to satisfy even finicky eaters.

Dinner always starts with a small aperitif of sweet home-made plum liqueur to stimulate the senses. This is followed by two appetizers, including a tray of four or five little plates and bowls. That evening, we began with the boiled meat of an echizen crab seasoned with ginger, and then a tray that included roast beef wrapped like a California roll with yuzu mustard on top, a thick slice of dried fish roe to be eaten with a slice of radish, simmered vegetables, boiled shrimp and a slice of deep-fried fish. 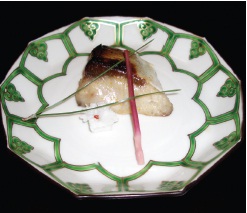 Kaiseki meals are sensory experiences so eye-candy appetizers are usually followed by soup, sashimi, and several main courses including a grilled dish, a pot of stew and something steamed, before ending with the customary rice and pickles, and dessert.

That night’s grilled offering was a fillet of yellowtail, rubbed with miso and then cooked to perfection, served on a Western-style green-and-white porcelain plate. It was meaty and fatty, but not oily. Afterwards came stewed vegetables and steamed tofu, followed by bowls of rice boiled with fish stock and soy sauce and then tossed with flakes of grilled sea bream.

At Gora Kadan, one can really eat well in every sense.

WHAT TO EAT
There’s only one seasonal kaiseki meal for guests staying one night. For those staying longer, they serve shabu-shabu, a different kaiseki meal, and then sukiyaki on succeeding nights.

WHAT TO DRINK
The local sake on offer is inexpensive and goes well with most meals.

WHERE TO SIT
Meals are usually served in the room, so it’s more a matter of which room to stay in. I personally like the ground floor rooms, which come with private open-air rock baths, a steam room and your own garden.