The Maverick: Rick Roa talks to Weekender about his new autobiography

Tony Teora and I went out together a few times. We’d walk into the place, sit down with friends and I’d start telling stories. He turned to me one night and said I had to write a book.”

Sitting in his beautiful home in Akasaka he shares with lovely second wife Machiko, Rick Roa is talking about how he got started on his recently released autobi­ography, American Maverick in Japan.

“I wasn’t interested, but Teora said he would take care of everything. I just had to tell the stories. I was happy with that arrangement.”

Roa, a colorful character well known in the Japanese and for­eign business community, has enough stories for two lifetimes. Born and raised in Brooklyn, New York, his first trip overseas was to Korea with the U.S. Army.

After that, he worked for an electrical company in the Bahamas, Germany and the Philippines, before landing in Japan in 1969.

He has had his finger in all manner of pies during his 35 years in Tokyo: English teaching, bartending, advertising, real estate broking, sports and music promotion. If there was yen to make during the bubble years, Roa was interested.

The book documents Roa’s journey through life, from his running with the Brooklyn gangs to his philanderings in the Philippines and his years as an entrepreneur in Tokyo.

There have been some hairy moments in that time. As Roa says in the book: “I’ve done a lot of crazy things… I’ve had people try to kill me…I’ve had success­es, not getting killed is one.”

That means he has had to leave out some stories:

“I would have got into trou­ble,” he says. “Other stories were just too crazy, people wouldn’t have thought they were true.”

He’s safe. There are some great tales in the book, but it’s not going to put any noses out of joint. Roa still has to work in the town, of course, so he had to keep some of the riskier stories up his sleeve.

“I also wanted to make sure all the stories were told in good taste and did not lead to gossip or scandalous talk,” says Roa.

Contrary to previous Weekender reports, Roa never managed TV personality Dewi Sukarno, although she does appear in the book. And there is no chapter on Japan’s infamous Kano Sisters, with Roa not giving much away about them. All he will say is: “I was the Kano Sisters’ international manager for two years. I have the utmost respect and admiration for them.”

In the book, he is a little more candid about his time dealing with the peccadilloes of Whitney Houston, Donna Summer and others during his organization of the American Music Awards Concerts. From Houston’s living arrangements to Summer’s bot­tled water demands, the reader gets an insight on the headaches that go with dealing with the A-list.

Roa is a master yarn-spinner. One of the stories in the book is about his time hanging out at the Playboy Club, and how it always had foreign singers working through a three-month residency — as long as their visa was good. For Roa, this meant he had a new girlfriend every three months. But that’s where the story ends in the book.

Roa picks up the thread at the interview: “One time, a new singer — a real knockout — started at the club. She did her set, came off stage and was walking past me sitting at the bar. I asked her if she wanted a drink. She sat down and we started chatting. After a while, she leans over and asks me if I know a guy called Rick Roa.

“I say, ‘Maybe, why?’ And she says, ‘my friend came back to America from this gig I’m doing now, and she told me I had to look him up. She says he’ll look after me.’

“Well, now I was getting rec­ommended to girls back in the U.S! Obviously, I looked after her for three months.”

Being in the entertainment business for so long, Roa met his fair share of singers, hostesses and strippers. The two girls on the book cover are from one of his favorite hangouts, One Eyed Jack’s, the huge cabaret club in Roppongi.

He left a lot of the carousing in Roppongi behind, though, as his business ventures became more centered on organizing and promoting big events. His years as an advertising sales person not only exposed him to the sleazy underbelly of Roppongi nightlife, it also toughened him up as a salesman. 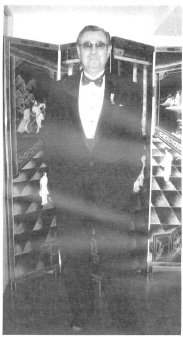 So Roa tells some great stories of selling and promoting “The Great American Train” (a train that traveled around Japan decked out with American-made goods), the American Music Awards Concert in Tokyo, and bringing the upper crust Harrow School rugby team to Japan to play a game alien to a Brooklyn wise guy.

He also talks of his dealings with Nick Zapetti, the central character in Robert Whiting’s Tokyo Underworld. Roa appeared in Underworld, too, and Whiting writes a complimentary blurb on the back page of Maverick.

The maverick in Roa has helped him achieve a lot for a poor kid from Brooklyn, but he also believes in simple business etiquette. “Trust is a major fac­tor for foreigners if they want to succeed in being an entrepre­neur,” Roa says. He also keeps his friends close to him: “I’ll always answer your call. But if I call you, you better answer my call,” he says.

Now 64, Roa has cut down on the hard living, but shows no signs of giving up wheeling and dealing.

“I have some dynamic proj­ects that are coming up in the next few months, including the Pro Bowling Association Japan Cup in September, but for now I am working on promoting the book,” he says.

For a man who attempted to bring the Oscars to Tokyo — read the book! — Roa is sure to shift a few copies. But it also helps that the book is full to the brim with great stories of a true maverick.