Where people from around the world feel at home

A friend of mine some­times likes to visit the kind of bars where there are a lot of foreigners. I’m sure you may know of these kinds of bars, and perhaps you have some sort of impression of Japanese women who visit them.

At first I thought it was because she wanted a chance to speak English, which she does pretty well anyway. But she told me she likes to go for the “inter­national” atmosphere. She also told me not to use her name in this story because she doesn’t want to be misunderstood as the kind of woman who hangs out in those kinds of bars. She said she only goes occasionally, almost always with friends, and only talks to foreign people who have interesting things to talk about.

Of course I was curious. So a while back I asked her to take me along to one of her favorite places. We set a date, and she told me to meet her in Meguro. In Meguro? I just assumed it would be in Roppongi. Well, she changes trains in Meguro on her way home from work, and she found this friendly English pub with an interesting group of reg­ulars.

After I went there with her earlier this year, I have been back a few times. The place is called the Black Lion, and it’s on a side street just off the main road that runs down the hill from Meguro Station. It opened in 1997, and a few years later, the name was changed to Little Euro. But apparently nobody really liked that name, because it wasn’t right for an English-style pub, so last year they changed the name back to the Black Lion.

The first thing you notice is this big, friendly Canadian named Scott. He is the manager and always greets the people as they come in. He’s got that big “irrashaimase” voice, but speaks in English. He also walks around talking to customers, so he is one of the main reasons for the friendly surroundings here.

The first impression you get is that the pub has a cozy atmos­phere, but when you have a look around, you can see it is rather spacious. I think that is because it is divided into three areas. There is a small raised area next to the front window, an area around the bar with a few tables, and the larger back room with tables only. 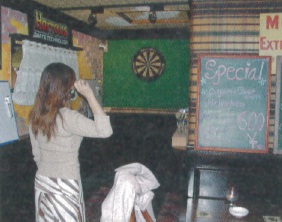 Way in the back there is a real dartboard in a throwing area free for customers to use. Once, when nobody was looking, I walked over, pulled a few darts out and tried throwing them at the target. I surprised myself by getting a near bullseye, but that was prob­ably beginner’s luck.

Right near the front door, there is a computer with a fast Internet connection, and customers are free to use it. I wonder how many people check to see if they have any new messages from their sweetheart during an evening of drinking. There is also a projection video showing sports games, and that seems to be popular.

People of many different nationalities come here so, in addition to British beers, they have beers from around the world and also a large menu of other drinks, including wine and the kinds of cocktails I like.

The cocktails are made strong; I guess so the foreigners don’t complain. I once had a vodka and orange juice that got me tipsy pretty fast, so when Scott came by to ask if I wanted a refill, I told him I couldn’t drink any more. A few min­utes later he brought me some soba tea his wife makes for him to take to work. That was a thoughtful ges­ture.

I noticed there were about 30 kinds of beer on the menu, plus various spirits, cocktails and wines, and also the Black Lion serves popular UK pub food such as fish and chips (of course!), sausages, Cornish pasties and a ploughman’s lunch platter. There are also more American things such as tacos, chili con carne, pizza and roast chicken.

In addition to this standard pub food, there are a few surpris­es, such as the shrimp and avoca­do salad, which is probably my favorite.

There is really a community feeling here, and I think the Black Lion is one kind of pillar to sup­port the foreign community. There is a small library of books and a few videos open to all — the general rule is to “bring a book and take a book,” as one older gentleman told me.

One regular customer from the U.S. told me he goes a little out of his way once or twice a week to have drinks at the Black Lion. He told me that, when he used to go to the busy Roppongi bars, it made him feel like a tourist, but at the Black Lion he can really feel at home.

Everyone knows a bar is not just about drinks, so maybe you would feel at home here, too.