Japan has lost touch with its culinary tradition and turned into a nation of fast food, fast living and conven­ience. That is the verdict of Katsushi Kunhnoto and the organization he founded —Japan Food.

The Japanese version of the “Slow Food” movement aims to put food back at the center of our culture and lifestyle, and to examine every part of the food chain, from the farm to the din­ner table.

“Basically, we have food, and we have consumers, and there is a big black box in between. People don’t know what they are eating—they don’t check,” says Kunimoto.

Kunimoto became interest­ed in Slow Food when working as a designer in Italy—the home of the movement, and on returning to Japan, he founded the Japan Slow Food Association.

But members and staff feel the Japanese version has a broader scope, taking in tea ceremony, Buddhism, and other diverse aspects of Japanese cul­ture. To reflect this, the organi­zation has changed its name this month to “Japan Food.”

Children’s education is the starting point for improving eating habits. Fast year, The Japan Slow Food Association asked 100,000 kids to paint pic­tures to decorate the dinner table. Few of them drew real vegetables and fish. Most drew pictures of the plastic containers that line the shelves of conbinis on every street corner. “It was unbelievable,” says Kunimoto, “What a crazy culture.”

He ascribes the decline in the nation’s tastes to changes in family lifestyles. Whereas in the past, eating together as a family was the norm, we live in a time of double-income families, long working hours and microwaves. “Kids come home and there’s nobody home. They go to the conbini for a bento?

Another factor is the Japanese appetite for trends. Fast food chains such as McDonald’s (which has almost 4,000 outlets in Japan) have been very success­ful because young Japanese were so keen to embrace this new style of dining. In fact they have done so to excess. 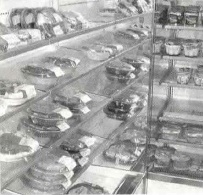 The wolfing down of burg­ers, fries and bentos means that nowadays the average high school student chews a mere 600 times a day—30 years ago this figure was 8,000.

To get to the next generation of cooks and diners before Ronald McDonald, Japan Food visits schools around the coun­try, presenting workshops and teaching about traditional recipes and the benefits of healthy eating. Many famous chefs participate in the sessions and, according to Kunimoto, the fun, face-to-face approach has a great effect.

Parents are also encouraged to volunteer to cook healthy lunches at schools, and the organization is putting pressure on local mayors to provide lunchrooms in schools where students eat in a classroom.

Japan Food is also working to improve the supply side of food. It has compiled the Vegetable Red Data Book, a list of traditional vegetables, many of which are in danger of dying out.

To encourage closer cooper­ation among food growers, Japan Food has helped to found the Japan Vegetable Strategic Network. Kunimoto calls his vision “cross market,” where farmers from around the coun­try will exchange their produce over the Internet to sell to local markets.

“At the moment, there are too many links in the supply chain. Food goes from A to B to C… I want it to go F to F: Farmer to farmer.”

It may seem that Japan Food has unrealistic aims—trying to resist the natural tide of economic and social change.

Do they want to kill off fast food? “We want harmony. We have open hearts and minds. We don’t want fast food to disap­pear, we just want them to change their ways for the better,” replies Kunimoto.

And how can we make time for the Slow Food lifestyle in the modern world? “Slow food is not necessarily about slow cod­ing and eating,” he says. He persuaded many supermarkets to sell pre-cut vegetables ready to throw in the pan, to take the time out of healthy cooking.

Ultimately, he says, it is up to each person to think about their priorities and make time.

“If we can’t do not do this, we are not Homo Sapiens.”

Food was the foundation of human society and happiness. Kunimoto points out the Japanese character for meal, “shoku“, is formed by combin­ing the characters for “human” and “good.”

Many Japanese are thinking about putting the “good” back into food. Food labeling scandals and Mad Cow disease have helped Japan Food’s cause and harmed McDonald’s, which closed 130 restaurants last year).

“Slow food” is a new buzz­word, and food companies are queuing up to be associated with the name. If Slow Food catches on as fast as fast food, Japan’s high streets, conven­ience stores, supermarkets and dinner tables will look very dif­ferent in 30 years.