“Hallelujah? Now what the Sam Hill kind of a name is that for a Korean restaurant?”

“I reckon they’s Christians, Uncle Charlie,” Sung Junior offered. “Now don’t you think nothing about that, I hear tell they got your good kim-chee.”

Thirty years in Texas’ll make Korean talk like that.

I known Sung Junior since he was in diapers, back in 1953 when I was holed up in his family’s barn on the wrong side of the fence during the Korean War. Had a little mission installing some gear. Way the war turned, it was a good six months before I got back to ‘burgers and beers.

The whole time I ate Korean food what his momma cooked. Not your fancy stuff. Nope, none of that soft spicy beef you grill at your table. She made them grey noodles you really gotta chaw down on, and all them kinds of vegetables what you never see stateside. Best I liked the pickled cabbage and vegetables they call kim-chee. Mrs. Sung made her own – lots of garlic, lots of chili, hot enough to make the meanest hombre in Laredo cry for mercy. Damn, it was good.

After the smoke cleared, and the DMZ was drawn in the sand, I still stayed in touch with the Sungs. Always have – they’re decent folks. Even helped Junior get into Texas Tech in ’72. Studied electronics, good stu­dent, worked hard, graduated and got snapped up by some outfit making recon gear. Got himself a green card, been in Dallas ever since. Flies to Seoul a lot on business, sees his folks, and now and then has meetings in Tokyo.

When Junior called this spring, I begged him to take me someplace serves chow like his momma makes. He asked around on the Korean grapevine and found out about Hallelujah near Gaien-mae station.

Opened up this March, but you wouldn’t never guess by looking. All grey and shabby with corrugated sheet metal sid­ing, already got rust. Looks like Tokyo when I first came through in the ’50s. Gave me that déjà vu all over again, and another round of nostalgia on the house.

Junior ordered big bottles of Hite Beer from Korea, only ¥500, and darned if it didn’t taste a whole lot like Miller. Then bowls of fiery red kim-chee and marinated soy bean sprouts landed on the table, you don’t gotta ask. Hot and heady and sour – that’s how you know you got the real deal kim-chee. Then Junior ordered the chow.

Muku – some kinda tofu made with buckwheat flour, chews like tofu, tastes kinda like nuts and oatmeal. Came in a huge salad with a sweet and hot dress­ing. Lettuce, chrysanthemum leaves, cukes, nori seaweed, the works. Enough for four, ¥1,000. 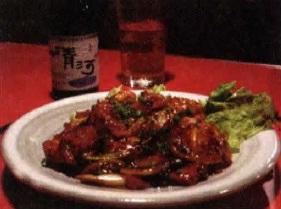 Shrimp and scallops, big as a baby’s fist, in a chili sauce, rich with miso, onions and red pep­pers with a fiery tang, plenty for two, ¥1,800. Took a picture – see what I mean?

Steamed oxtail, soft yet chewy, falling off the bone, more beef flavor than you can shake a stick at, ¥850.

“You ready to grill up some meat now, Uncle Charlie?”

“Now, Junior, I just can’t. Just hog tie me now and hang me up. I already been stuffed.”

To tell the truth, Korean home-style cooking suits me so well I don’t need to grill up no meat. Junior said we’d just missed the salt-pickled raw oys­ters cause they only got ’em in the winter. His momma used to make them, too. Smelled all to high heaven, so’s you had to stay upwind of the shed out back. At night, old man Sung would crack a bottle of moonshine so-ju, and we’d suck ’em down between shots. Nothin’s better with so-ju than them salty stinky oysters.

“Next time you come here, Uncle Charlie,” Junior drawled as he perused the menu, “you oughta try the kim-chee gyoza and get yourself a big bowl of Samgetang.” That’s the big pot of soup with a chicken stuffed with rice and herbs, supposed to really put lead in your pencil during the hot summer months.

It was getting close to 9 p.m. and the place suddenly started to fill up. Junior said he’d heard it’s best to go early. I ain’t sur­prised this place is already a hit. Charlie Jake says two thumbs up for dinner, and likely good at lunch if you can get in the door.