My first Japanese-bar experi­ence was in the mid-’90s in Takaoka, Toyama Prefecture. It was one of those classic one-man shows, with room for about a dozen patrons and a menu that changed with the master’s mood. (For the uninitiated: Male Japanese publi­cans are called masters. Their female equivalents are mamas.) It didn’t take me long to shed my Welcome Outsider status and become an Insider.

But then Tottoya started becoming popular with the for­eign community, and that meant Japanese Insiders were often turned away for lack of space. Worse, a lot of the foreign­ers—many of them mere Friends of Insiders—were taking up valuable real estate and nursing a ginger ale or two for hours.

Tottoya eventually became a gaijin dame (no foreigners allowed) bar, with only a few non-Japanese Insiders—all of us cash cows—allowed to blow our hard-earned teacher’s salaries there. We had an unspoken agreement with the master, how­ever, that we were not to intro­duce any more foreigners to Tottoya.

But I did. And it wasn’t just any foreigner, but a big, hairy, rowdy Kiwi. The master tolerated us just once. I was demoted to the rank of Unwelcome Outsider and never allowed in again.

At Windsor Bar in Azabu-Juban, I used to be a Friend of an Insider. Then he left. I guess I could still become an Insider if I were willing to sacrifice enough blood, sweat and tears, but I just don’t know if it’s worth it. Becoming an Insider is a hell of a commitment, you know.

In Roppongi recently I had a classic Unwelcome Outsider experience at a new place called Going Home. (I’d provide the address, but the master said he doesn’t want “strangers.”) As I swung open the door I was greet­ed, not with a welcoming “irasshaimase!” but with a look that said, “Who the hell are you, and how did you find my bar?” I was actually a Friend of an Insider, but the master wasn’t immediately aware of that. Fair enough, I guess.

Which brings us to Bar Code 10125 in Azabu-Juban. They greeted us with smiles immediately. No hesitation. No freaking out at the site of an interracial gaijin couple. No problem with our survival-level Japanese. We were Welcome Outsiders from the start. 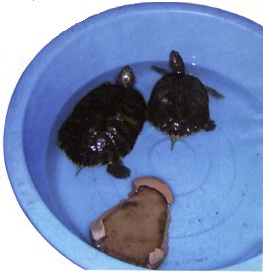 And the cute young barmaid even laughed when I asked if they could whip up a dinner for me with the live turtles they inexpli­cably kept in a bucket on the side­walk in front of the bar.

Truth be told, we didn’t know the name before we got there. Dan kept calling it “that barcode bar” because of the sign out front. Lucky guess or genius? He bought my drinks, so this time I’ll choose the latter. I suspect, however, that the choice of digits on the marquee is intricately linked to some phenomenon that is wholly inscrutable to any non-native Tokyoite over 29.

Even among the most jaded world travelers, life in Japan enhances one’s creative flair for nomenclature. Personal testimo­nial: For almost a year, my favorite TV personalities were Chubby Checker and Monkey Boy. Till, that is, my benevolent Japanese partner-in-crime clued me in—Papaya Suzuki and Ninety-Nine. I’ve dubbed this pseudo-science “pop culture onomatopoeia.”

Then there’s the tale a girl­friend told me. A new teacher had recently arrived at her college. One Monday after an adventurous weekend of explor­ing Tokyo on foot with phrase-book in hand, the newbie gushed to her co-workers about a store she’d discovered in Shibuya called “oy oy.” Everyone snick­ered. Someone finally took pity and schooled the tyro teacher. Though “0101” blazes across the facade in big neon numbers, it’s actually called “Marui.”

On our own quest to explore the city, we chose Bar Code because we thought it would be typ­ical: a polite, aloof,  stand-on-formality Japanese bar. We were wrong, mostly.

It’s cozy and friendly. Someone came in and asked for “Sex and the City” on the flat screen. Done, on mute with closed cap­tioning to boot. The tipple selec­tion is limited, but the prices are fair. Three red wines, three beers and munchies cost us ¥4,000.

Typical Tokyo moment: Dan pulled out his digital camera (which a fantastic lass gave him for Valentine’s day, who in turn got girichoco for White Day) to show me some shots. The bar­tender (in low-slung, painted-on jeans—how typical is that!) came over to tell us how kawaii it was. To show off its handy-dandy fea­tures, I pulled up some pics of our last “assignment.”

On the tiny screen, she recog­nized the dark, moody locale as Seco Bar and the musicians Audio Sponge. Turns out we had all three been there for the mind-boggling performance of that transgenerational ambient won­der. Once again, Tokyo became a tiny town with a handful of city dwellers among whom we circu­late. Stay here long enough, and you’ll meet the few hundred gai­jin and Japanese who occupy your personal sphere of influ­ence.

For me, Bar Code is a com­fortable and friendly Japanese bar. It is not atypical, because “the wall” is only barely percepti­ble but very much there. Three groups of people came in after we did. Each one shared its kanpai with Ms. Painted-on, who poured herself a fresh beer for each gang’s first round. All pres­ent politely clinked; she sipped and set the glass aside. We, on the other hand, got bottomless munchies. I’m fine with that.

Some may say Dan and I were slighted because we’re gai­jin. I say it’s because we we’re foreign: not non-Japanese, but new. Here, early birds be damned; per­sistence gets the worm. For Bar Code, I’m willing to pay my dues.

Gia Payne is an editor, writer, self-preservationist, and devoted Tokyoite. And she co-wrote a book about bars, pardon ‘pubs,’ with some guy named Dan.