With the lights on, Seco Bar looks like an under-furnished J-Phone shop. But once the five or so retractable blinds are pulled down, the concocted ambience of the place is revealed. The Japanese are masters at making something out of something it was not meant to be.

So, trekking across town, Dan and I strolled into Seco. It was my third bar of the night and, though I was having a great time in the last nightspot, I had been looking forward to a new bar adventure. We promptly found our friends and formed a some­what formidable bar huddle.

I was interested but not arrested by the graphic art mon­tages projected on every wall and even into a corner or two. I made a mental note that Dan should be more fastidious with his sunscreen this summer; poor thing, under all those black lights his was suddenly covered with freckles. 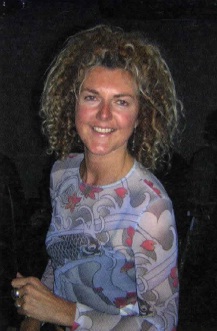 A special treat that night was Eva’s recent arrival in town. She is one of a small group of women I want to be like when I grow up. She and her husband ran my No. 2 favorite bar up until last year when they left town. (Why is it that in Tokyo “left town” means “left the country?”) Eva makes me feel “cool by association,” because she has so much to offer the common girl.

As we milled chatting and reminiscing, we each begin to notice that our defensive huddle had compressed. Our group was being crushed closer and closer together by the influx of people. In about 15 minutes, we went from five or so standing in a casual circle to two regimented lines locked shoulder-to-shoul­der ready for inspection. I lost count of the sumimasens I uttered each time I raised my glass and put my elbow in some stranger’s armpit.

At one point, when an illtimed sip managed to ram an ice cube up my nose, I paused and took a long, slow 360-glance at what the devil all the fuss was about. In this oddly conceived pseudo-club I had basically pooh-poohed, everyone was patiently facing the same direc­tion…the wall. It was a classic moment of gaijin comeuppance in the urban jungle. I didn’t like Seco because I didn’t “get it.”

I saw two options: you can extract yourself from your com­fort zone, do a bit of work and be rewarded for it. Or you can draw the curtains and stay safe and unchallenged in your own space. I straddled the fence.

This crowd of hip Japanese twentysomethings was staring at an empty stage with an unmanned drum set, a couple of turntables and assorted sound gear. Shortly the crowd parted in biblical wonder, when in marched four guys (definitely not twentysomethings) who promptly took their seats on the stage.  A reverent burst of  applause was quickly followed by awed silence as the Audio Sponge began its set.

My little huddle of companeros dissolved before my eyes. The men one by one went outside to stand in the rain rather than stay and listen. One quipped, “I’m going outside. My drink isn’t nearly strong enough to make me put up with this noise.” My friend Sharon got trapped, so she says, in the bar area full of carefree musical infidels lounging on sofas, clinking glasses and talking; she was forced to listen from afar.

Only Eva and I braved the ambient music performance up close, surrounded by a sea of transfixed faces mooning atten­tively at the grand masters on the stage. Surely, I thought, this is something I should be appreciat­ing—a once-in-a-blue-moon moment to see something new and cool. Eva concurred.

The Spongers finished. A cute little teen-ager squeezed under my elbow and grabbed at one of the maestros before he could dash off. She fervently grabbed his hand in both of hers and said something breathy and sweet I couldn’t understand. He politely inclined his head, with­drew his hand and swiftly exited through the crowd. The girl giggled and squealed. She proudly brandished her hand to two friends who likewise squealed and clutched the elated teen’s hand in glee. What just happened here? I wish I knew.

Afterwards, one of the girls asked Eva and me, “So, what was that?” I shrugged. Eva, of course, gave a more elegant response. She promptly produced a curt, to-the-point summation of what I had gaped clueless about. “Heavens,” I thought. “How does she do it?”

So, while I may thumb my nose at Seco Bar, I must admit I was lost and confused. I might go back, but on fusion jazz or funk soul night. That’s more my speed.

Milo, my man from Wyoming, has been talking up Seco Bar for months. And when Milo talks, I listen. It’s not just that he’s been in Tokyo forever and his advice is almost always spot-on. It’s also that we made it through two years of Saudi Arabian hell together, teaching and trying to ease our misery with homemade grape-juice wine at King Fahd University. (Recipe available on request.)

Concerning Seco, however, I’ve got to say: Sorry, cowboy, it ain’t all that.

I don’t know what happened to his judgment with this one. Maybe all that clove cigarette smoke wafting through the place finally got to him.

I was expecting a funky little semi-secret bar located under the train tracks in the back streets of Shibuya. At least I got the under-the-tracks part right.

Part of the problem was that we went there after hanging out at Propaganda in Roppongi. Now, I can take Propaganda or leave it, but at least it’s a real bar. Seco, on the other hand, is a psuedo bar, complete with psue-do-ornery bartenders and tee-totaling patrons.

Contrary to claims that I’m a dive-bar snob, I do enjoy a good artsy-fartsy lounge now and again. The Pink Cow in Harajuku, for example. And, uh, … I think there was a place in Washington, D.C. … nan, they kicked me out for enjoying myself. Oh, the old Nude Lounge in Omote-sando. That was an artsy one that I liked and that seemed to like me. Or at least my bar tabs.

But Seco. What was Milo thinking? In all fairness, he did say it was unusually unusual that night. About midway through the techno performance Gia mentions above, Milo and I had to escape for some fresh air.

“Good. Now I can have my bar back,” he said a few minutes later when the groupies, refusing to hang around for even one drink, filed past us en masses their way home—presumably to make strange noises with their computers.

Also in the name of fairness, and as much as I hate to admit it, I caught myself inadvertently bobbing my head at one point during the performance. To my surprise, I also felt a slight twinge or two in my legs, almost like they wanted to dance.

That sense of wonder trans­ported me back to a similar twinge I felt in another area below the waist when, as a young boy, I saw Raquel Welch wearing that famous cavewoman bikini in “One Million Years B.C.”

Of course, Seco’s effect was­n’t nearly as enjoyable as Raquel’s. So, sorry Milo, old pal; I don’t think I’ll be giving this one a second chance.

Gia Payne is an editor, writer, self-preservationist, and devoted Tokyoite. And she co-wrote a book about bars, pardon ‘pubs,’ with some guy named Dan.