In May 2018, Stasia Matsumoto launched her photography project #TattooGirlsJP on Instagram. Already a skilled photographer – who also runs a business offering personalized kimono experiences and photo shoots – she wanted to expand her portfolio and had the idea of showcasing heavily tattooed women in Japan so as to break down stereotypes around the subject. We sat down with her to ask her more about the project, and the inspiration behind it. 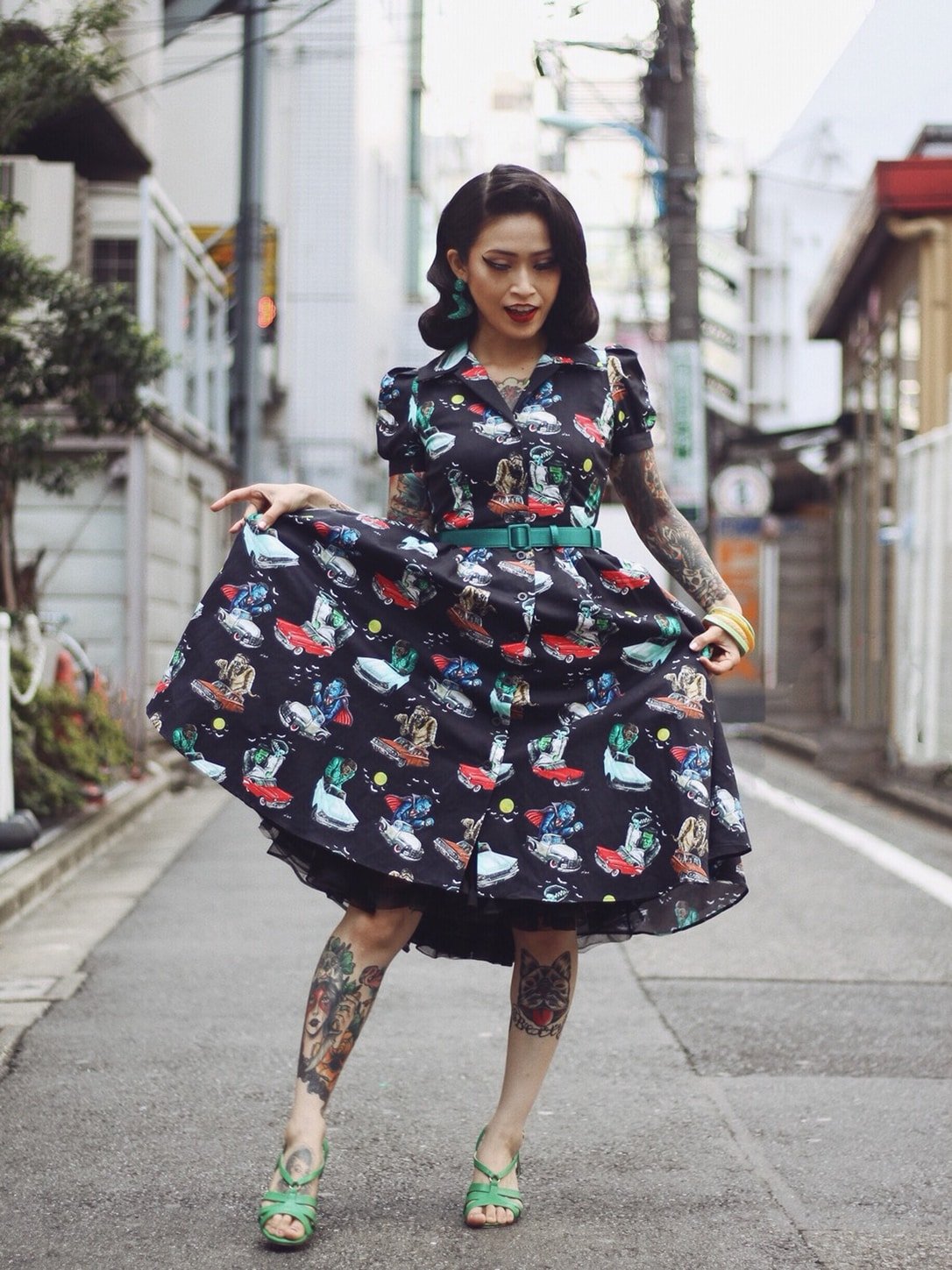 “Opening a shop required a lot of work, years of saving, dealing with tons of bureaucracy. This is when I felt that being a non-tattooed person in Japan is incomparably easier” – Kasumi @kasumipsycho

Why did you start the Tattooed Girls in Japan project?

I worked for four years in the tattoo industry and we mostly had foreign customers. They would often ask, “So how is it exactly with tattoos in Japan?” There are a lot of misconceptions about tattoos here. They believe what they read on blogs about how the image is so bad and that you won’t see tattooed Japanese people anywhere. Because I knew how it really was I wanted to show that.

But also, tattooed Japanese women don’t exist in media. They have absolutely no representation. There are no tattooed actresses or models. You won’t see any in magazines or on TV. So this is why I wanted to focus on women. I have my own platform with my photography Instagram account so I thought it would be nice to give them a spotlight and share their stories. I wanted to try to change those misconceptions. But I also didn’t want to focus on stereotypes; instead I focus on their stories.

The stories are a big part of what you do. “I used to be a stage dancer, so I’m used to people looking at me. I don’t bother covering my tattoos and you shouldn’t either. They’re so beautiful, don’t hide them” – Reina @dancer_crazy_girl

Have you had trouble finding models?

I shoot with women I know personally or have met through someone, or found on Instagram. I always explain what I do and that I don’t require you to wear a tank top or something revealing; just something you’re comfortable in, even long sleeves, is fine. I don’t require you to pose in a lewd way. That’s one thing I don’t like about [other photographers] showing tattooed women. They don’t show the women; they show their bodies. I want to show who they are. Most photos of tattooed women I see on Instagram are taken at hotels with them in lingerie, but I’m not about that.

Have you experienced any difficulties on shoots?

One time I was shooting with a model in Shinjuku Nichome. Shooting in Kabukicho is fine, surprisingly, but in Nichome we were stopped by police and searched. Obviously they were judging us by our appearance. I felt so sorry for the model that this happened. That was a pretty big thing. Especially since we both knew why they did it. It was July and, though I don’t usually show my arms, it was really hot and I was wearing shorts. I have tattoos on my legs – not many, but yeah, that was obviously the reason they stopped us.

How has the reaction been otherwise?

It’s been great. Only positive. I think people enjoy seeing tattoos in a different way and learning that what they thought was true – that no Japanese girls show their tattoos – is wrong. “I’ve gotten used to the stares and don’t pay attention to them anymore. As a foreigner, my tattoos are more on the cool side for Japanese people” – Julia @coscocat

What have you learned through this project?

I like meeting people and listening to their stories. My mind is really open to everything. I’ve met so many people and heard so many stories. You learn a lot about people and the reasons behind their tattoos. Sometimes there are no reasons; they’re just purely decorative. Others have reasons like it was for their late father, or they want to feel beautiful. It really opens your mind and heart to different ways of thinking.

What are your future plans for #TattooGirlsJP?

What have your own experiences as a tattooed woman in Japan been like?

I don’t like drawing attention to myself so I choose not to show them, but that’s just my choice. It depends I think. Sometimes I think I can’t be bothered with long sleeves, but most of the time I’ll cover them. I have many Japanese friends, especially older ones, and at first when I meet them I want them to see me as me, not as some tattooed person. Then it becomes just a natural part of me and they don’t really react to it at all. In Japan it’s a vicious circle. People choose to cover them as it’s a culture of hiding things and not showing off. They cover to not bother others or to protect themselves from being stereotyped so you don’t see many people with them around. So people think that tattooed people in Japan don’t exist, and the circle just goes around. A lot of people here have tattoos – you just don’t always see them. “To be honest we never cared that much about the negative image tattoos have in Japan. We do it because we like it, that’s all” – Miho and Maho (twins) @miho90413 @maho413

What is the current status of tattoos and tattooing in Japan?

Right now it’s fine, however most tattoo artists in Japan think it might be made illegal again. The last time it was completely illegal was during the Meiji Period because Japan thought they couldn’t show this “barbaric culture” to the world. But surprisingly, or maybe unsurprisingly, American soldiers and even King Edward VII of England got tattooed in Japan. So after WWII [during the occupation], the Americans made it legal. But now it’s in a gray zone, kind of like Pachinko and gambling. There are many things like that in Japan. It’s obviously not illegal right now since my last work visa was sponsored by a tattoo shop. The only places that are “bad” are certain places that serve only certain members of a certain organization but you’ll never even hear about those shops. Regular tattoo shops here are the same as anywhere else in the world.

Do you think Japan’s strict regulations – for example, no tattoos allowed in onsen – will change?

They have to change. Oita’s onsen are becoming more okay with tattoos. There are many rules that are not really enforced here. It’s just Japan. It is what it is. It’s a rule that was there because that was the only way they could say no to certain organization members and it just continued. Then they think they have to keep following it. Also top management don’t see the disconnect. The staff at a gym, for example, have no say; they just follow what’s in the manual. I know Japanese people who are becoming more vocal about it. As a foreigner in Japan I don’t have any ability to change anything; Japanese people have to do it themselves. What I can do through my tattooed girls project is give them a platform to express themselves. A lot of the girls I interviewed said they believe things will change. “I’m pure Okinawan. Our culture is very rich and tattoos are part of it. I grew up without being taught to think of tattoos as something negative” – Haruka @nemo_1748

Changing the subject, tell us more about your work as a kimono stylist?

First I was a photographer, but I was also doing kimono school at the same time. I just wanted to combine the things I love, and I love photography and kimono. My interest in kimono started through one of my friends, Chika-san. She would often take me to a kimono rental shop in Asakusa and we would just hang out and have fun. In 2016 she arranged for me to wear her furisode, the one she wore for her Coming of Age Day, which was 40 years ago. We did my hair and a photographer I know took some photos of me. It was so special that she wanted me to wear it. That was when I thought it would be really cool if I could wear kimono myself. I told her about this idea and she was very supportive. She even gave me some of her mother’s kimono, which felt very special for me. Almost three years later I’m running a kimono stylist business.

What makes your services different from the average kimono rental shop?

Most shops don’t [consider the style of the person]; they simply ask you to choose a kimono. But it’s not like you have the knowledge of what goes well with what. So I thought it would be different if I offered personalized styling and thought about the person who’s going to wear it. I think about what they usually wear, what they like, what color hair they have, eye color, everything. I think I found a gap in the market and I think I have an advantage because I was a photographer first, so I can combine those skills to make the experience so much better.