American artist Vaughn Spann devotes his practice to abstraction and figuration as an investigation into space, time and memory. He locates subjects from deeply personal spaces as he reconciles with his body within and out of the studio. With a deep admiration for formalism, he enjoys approaching paintings through the lens of color, line, and shape, but seemingly understands that one’s subjectivity can’t simply be divorced from the studio. For him, a form is a striking means of generating content in ways that are compelling. His formal investigation permeates his paintings, symbolically reflecting his encounters with diverse people and places.

Vaughn Spann was born in Florida (1992) and lives and works in Newark, New Jersey. He received his BFA from Rutgers University (2014) and his MFA from Yale University (2018). Spann’s work has been exhibited at the Newark Museum, Reginald Lewis Museum in Baltimore, and the Rubell Museum (Miami). Among his awards is an Alice Kimball traveling fellowship (2017) and among his residencies is NXTHVN in New Haven, CT (2018-19). 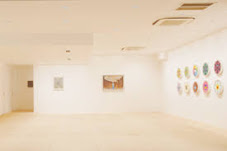