Ah the humble egg sando. The go-to breakfast while heading to the office. Mayonnaise smeared on your pinky and a defiant up yours to the more affluent breakfasteers lounging languidly at sidewalk cafes with eggs benedict or smoked salmon mixed through silky scrambled eggs. Or the choice of those too hungover to queue at McDonald’s for its breakfast muffins which you immediately regret after scoffing with such a burning disappointed shame.

The sandwich has a history that dates back to 1762 when John Montagu, 4th Earl of Sandwich, introduced this culinary staple to lucky British folk who had access to bread. In Japan, the sando or bread at least has probably been available in some form since the Portuguese and Dutch landed in Nagasaki during the Edo Period (1603–1867) but didn’t gain proper traction until, according to writer Shane Mitchell, “the Meiji Period, when pioneering Japanese baker Yasubei Kimura created anpan…in 1874. Other yeast buns soon followed, including melon pan (with a meringue-like topping) and cream pan (inspired by cream puffs or choux à la crème), invented by Nakamurya baker Aizo Soma in 1904.”

The egg sando or egg salad sando to be more precise, however, is more mysterious in its origin. Nobody seems to have an exact date of its birth in Japan but it’s safe to say that the rise of the ever-present conbini had its hand in cementing the egg sando as a staple for many a schoolkid, office worker or poor student looking for a druggy sulfur rush and oodles of dirty mayo. 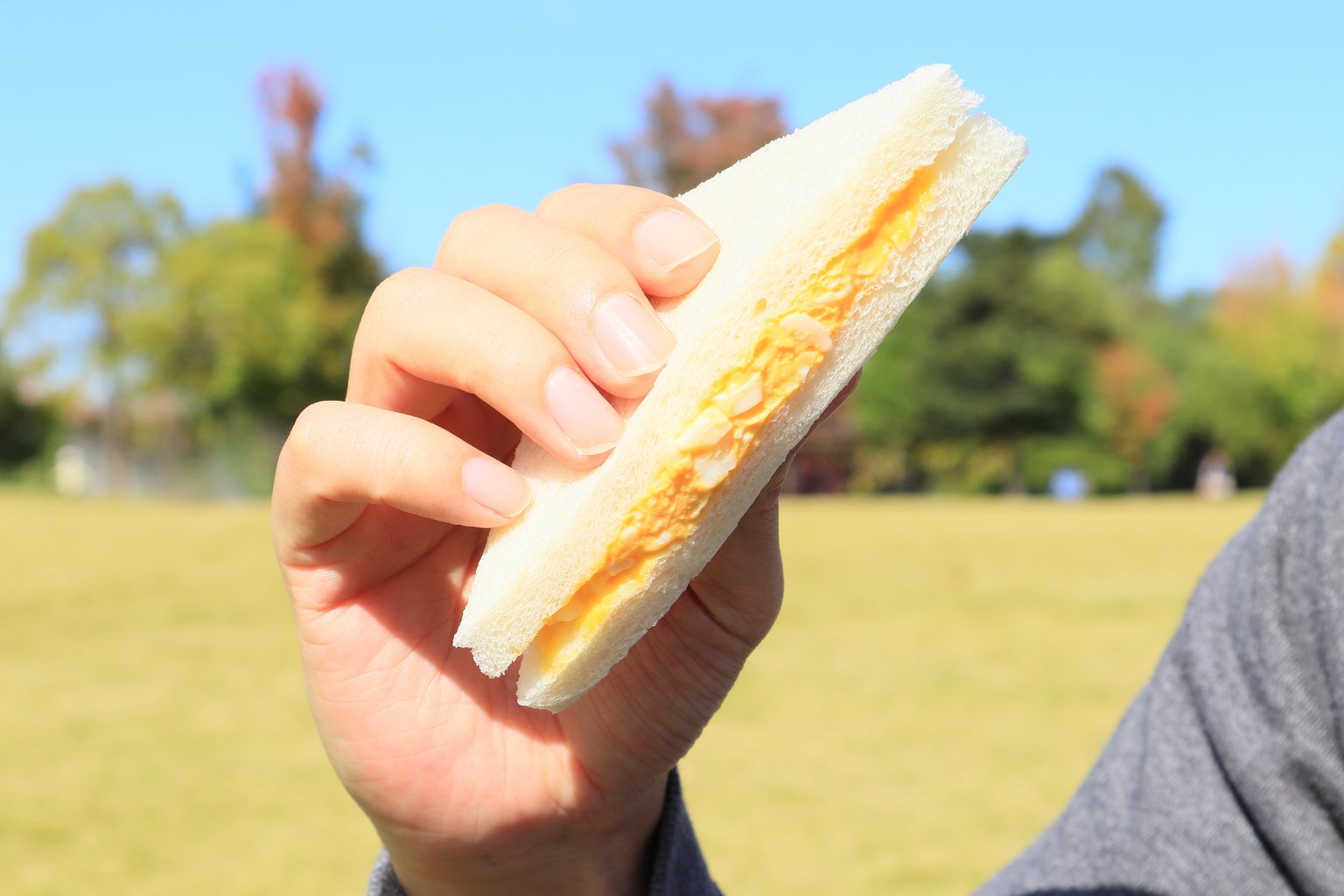 For any self-respecting foodie out there, it would be fair to say that you already know that the late great Anthony Bourdain had a huge influence in promoting the conbini egg sando as a culinary essential. Bourdain loved an egg sando so much, especially popular conbini Lawson’s take on it, that whenever he came to Japan, he would immediately seek them out. In the Okinawa episode for his Parts Unknown series he commented, “There is one thing I can’t give up. One thing I keep coming back to every time I come back to Japan. One thing that has an unholy grip on me, for no reason that I can gather. The convenience store formerly of Akron, Ohio that mutated into a massive Japanese chain. Behold the wonder that is Lawson. What is it exactly about this place that has its tentacles so deep into my heart and my soul? Pillows of love. Egg salad from Lawson.”

If you check out YouTube there is plenty of love for 7-Eleven’s egg sando and lessons on how to create it at home from a variety of desperate YouTubers. I may as well come right out and say it. If you prefer 7-Eleven’s egg sando over Lawson you, my friend, are a heathen, an infidel. Even Family Mart’s pale imitation is better than 7-Eleven. There’s something about the Lawson bread, the egg-salt ratio and the right amount of mayo that Lawson gets right. The others just don’t hit the mark. Where To Get a Great Egg Sandwich in Tokyo

Where else can you find decent or very good egg salad sando in Tokyo? To be honest, everyone has their own favorite place but here is a small list of my personal favorites as well as some other suggestions from friends who also share my unruly penchant for an egg sando.

First on the list is Kissa American in Ginza. With humongous amounts of white bread filled with a truly outrageous amount of egg salad filling, this joint has been super popular since opening in the early 1980s.

Yukari Sakamoto, my pal and food writer for Tokyo Weekender and The Washington Post, suggested Wa’s Sandwich in Shinjuku Station’s NEWoMan complex. Huge in size and only ¥500 it’s an absolute steal.

If you do a Google search about egg sando in Tokyo then one place comes up more than others. Azabujuban’s Amanoya does its own Kansai twist on the egg salad with more of an omelet filling which has been a huge hit with customers since its Tokyo store opened in 2012.

In the backstreets of Higashi-Nagasaki, an up-and-coming neighborhood in Toshima-Ku, is the majestic and ultra-local mom-and-pop bakery Marujyu. With the kindest obachan in the world serving, all Marujyu’s bread and pastries are top-notch. Try a choco pan with your obligatory and super salty egg sando. You’ll walk out a new person and want to come back for more and more every day. The local schoolkids and neighbors love this place and for good reason.

In Seibu Ikebukuro you’ll find another gem. Little Chef (not to be confused with sad British roadside diner from the 1970s and ’80s) serves up some truly brilliant egg sando with eggs which are apparently sourced from famed Irako Farm in Aichi Prefecture. On the Seibu site, if you’re looking for shits and giggles, it says that Little Chef is a delicatessen for “woman.” I have no idea what that means but there were plenty of men and kids there when I last visited.

If none of these spots have you running out the door in search of the ultimate egg sando then try some of the suggestions from the many many egg sando accounts on Instagram. Whole Insta pages devoted to Tokyo and Japan’s love of eggy and mayo goodness. My personal favorites are listed below:

While the British are still more than fond of an egg and watercress sandwich, with Marks & Spencer’s version being considered royalty among high street choices, Japan, on the other hand, has taken egg sandwiches to new heights with a real otaku-level of interest in them. From kissaten and conbini to department stores and local bakeries you’ll find the egg sando everywhere.

So, have a look around, search on Insta and you’ll be up to your neck in egg and mayo forever. It’s crude and nasty, but it’s something I dream about regularly.