One of the best things about Tokyo is there’s always something new. There are creative seasonal menus and pop culture collaborations that you can find only here. Themed cafés and restaurants are all the rage too. Speaking of novelties, here’s our discovery of what’s new in Tokyo this month. Spy x Family, the super popular anime taking Japan and the world by storm, returned with new episodes on October 2. Pronto is joining the hype with a special limited edition menu developed in collaboration with the anime. Following Pronto’s success with its Stranger Things-themed café, it’s safe to assume this collaboration will be well executed too.

The café is offering three special drinks and three pasta dishes, one for each family member from the anime. Anya inspired a strawberry chocolate milk drink, dad Lloyd a fruit citrus tea and mom Yor has a bright red juice representing her. More original drinks will be announced in mid-October. The whole experience can be rounded off by buying original merchandise to take home. Japan’s first tarot museum opened in 2021 and a year later in October 2022, it is opening a café too. Located in Asakusabashi, it offers plant-based bites, original coffee beans roasted at the Ammonite Coffee Market and tea from Leafull Darjeeling House Ginza. The space is dotted with tarot-related objects, books on the ancient practice, mosaic artworks and of course decks of tarot cards that visitors can use. The café plans to offer lessons and guidance on learning to read tarot, as well as various other events focused on astrology, mythology, art and food.

The café will start offering tarot readings in the spring of 2023, so for now it’s all about enjoying the ambiance and browsing the collection of thousands of tarot exhibits in the Tokyo Tarot Museum. The whimsical house design is based on three Grand Prize-winning designs submitted via an open competition. Tsubakuro house has elements of a birdhouse, a traditional Japanese house and, of course, baseball themes such as its baseball cap on top. The space is to be used for relaxing as well as looking at Tsubakuro memorabilia.

The house will have an opening event on Sports Day which is on October 10. It will be open to the public the following day.

Japan’s biggest eSports facility that opened in Tokyo Tower this spring has been adding to its roster of futuristic tech experiences. Named simply Red Tokyo Tower, the facility occupies three floors of the iconic Tokyo landmark. A vast space of 5,600 square meters, this is a theme park of all things gaming, digital and futuristic.

After finding its bearings this summer, Red Tokyo Tower dives deeper into the new developments in tech this autumn. In September it launched an NFT art gallery, in October it debuts its own VTuber and in November it will host a collaboration event with Japan’s most prominent VTuber idol group Hololive.

The first floor of Red Tokyo Tower has an area named the Wonder Zone that’s free to enter. The third floor, called Inspiration Zone, has retro game arcades and VR games, while the fourth floor ramps up the excitement with 17 different attractions and is aptly named Attraction Zone. Here, you can play various new games and solve mystery puzzles.

The fifth floor is named the Ultimate Zone and it offers fascinating cutting-edge technology games, eSports matches, as well as a space to hang out. The café au lait specialty store “Cafe au Lait Tokyo” teams up with the famed coffee liqueur for the first Kahlua specialty store in Japan. Located in Ginza, it opened on October 1, International Coffee Day, with a 40 percent discount on the Kahlua Queen Course in the first two weeks.

Here you can try every possible Kahlua flavor in combination with a choice of several different plant-based milks in addition to regular milk. The drink can be further customized by choosing the type of ice and the toppings. There are also Kahlua cocktails, Kahlua desserts and even savory food cooked with Kahlua. The Story of Romeo and Juliet Through Food

Hotel Mesm (stylized as mesm) brings gourmet and Shakespeare together starting on October 17 with lunch and dinner menus inspired by the Romeo and Juliet play. Every detail is crafted to bring out the story to your tastebuds. There is the bittersweet secret love represented by a deep red beetroot starter with sour tomato, followed by a main dish enveloped in greenery to represent the garden under Juliet’s balcony with a dollop of yellow sauce to play the role of the moon and so on.

The lunch and dinner menus are completely different, showing various scenes from the play. The menus will be on offer until February 28, 2023. 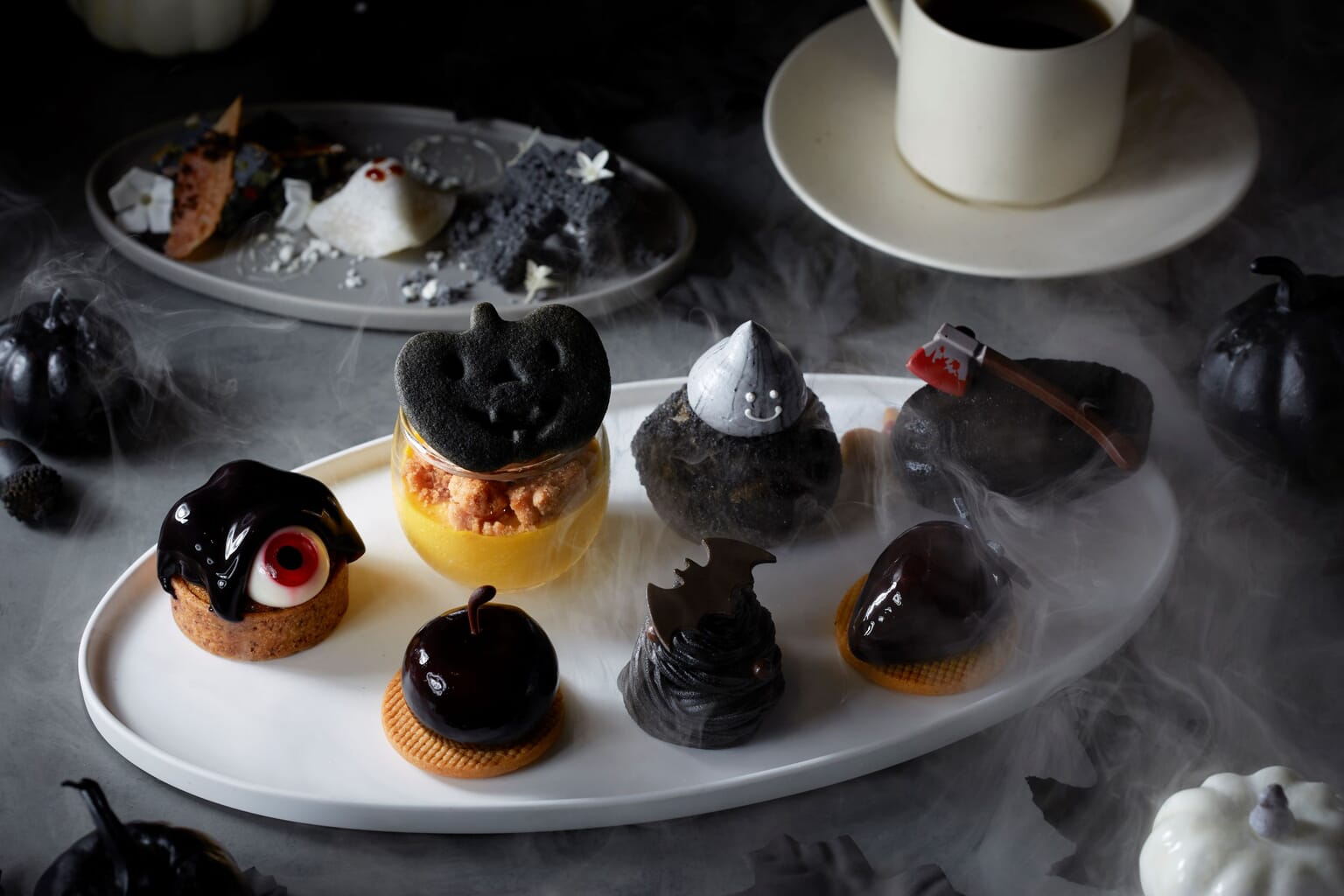 Last but certainly not least, October in Tokyo is decked out in Halloween gear. Jack-O-Lanterns are popping up everywhere. Almost every other eatery offers Halloween-themed treats and Halloween aesthetics have taken over the high-end menus and afternoon tea spreads. Here are just a few of our favorites.

Hyatt Centric Ginza Halloween Afternoon Tea is the deliciously spookiest of them all. You can dig into seven different sweets and three savory dishes modeled after poisoned apples, graves, ghosts, crosses and pumpkins.

Finally, there’s the Halloween afternoon tea on wheels. Organized by Upstar, this double-decker bus serves afternoon tea on the upper deck and the ride lasts for 90 minutes. The afternoon tea catered by Ginger Garden Aoyama will be themed around Halloween in October. Make a reservation since the bus only operates on weekends.