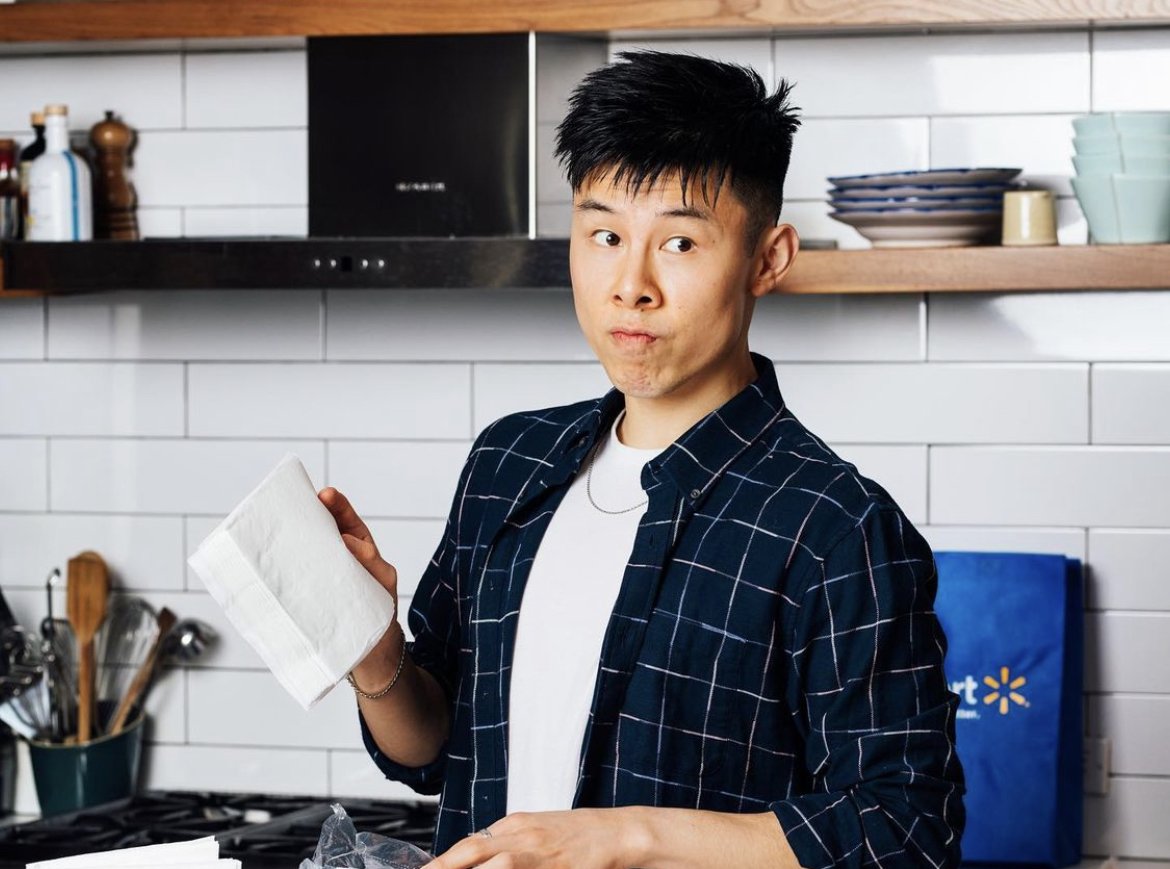 When he's not baking, Alvin Zhou is bringing anime food from the screen to the table

Purveyors of the delicious side of YouTube are no doubt familiar with the name Alvin Zhou. From testing out only egg recipes for 24 hours to making an 11kg bowl of ramen for a sumo wrestler and discussing individual ingredients, with the rest of the BuzzFeed crew, Zhou has certainly tackled the subject of food from a variety of interesting angles. His latest endeavor, Anime with Alvin, under the Babish Culinary Universe (BCU) sees him portray food in a different light. Through an exploration of animation, music and video game dynamics, he’s been able to combine his different passions into food content enjoyed by millions around the world.

“Growing up, I was the fat kid that never stopped eating,” says Zhou.

It would not be a stretch to say that food has always been a significant part of his life. Long before internet fame, he was baking to prove to the kids at middle school that boys could cook as well as girls.

It wasn’t until his college years and the dissatisfactory meal plans of this dorm that led him to experiment with supplies to bake cookies and other treats for his campus friends. Combined with a professional camera lent to him by a friend, he started taking photos and videos of his culinary escapades and sharing them online. This caught the eye of then-growing media behemoth BuzzFeed who recruited him for Tasty.

Love for the Cinematography of Anime

Just like eating, anime and video games have been a consistent motif since childhood, although Zhou admits to enjoying it a lot more quietly as it was looked down upon by his parents and his peers.

“A few years back, I started noticing how these hobbies of mine were influencing my work,” he says. “I’ve always appreciated anime as art but I found myself really honing in on the cinematic aspects of it and trying to understand how and why some of the scenes impacted me in such an emotional way. From anime such as Attack on Titan, I was enamored with how it portrayed trial and struggle, and I sought to shoot things in a way that could capture the same emotions some of these anime characters were able to convey.”

Zhou played piano as a child but enjoys it much more now as a self-taught adult and he especially loves the music found in video games like Nier: Automata, Steins;Gate and Your Name.

“Makoto Shinkai is a master at lighting, portraying rain and including unconventional scenes in his movies,” says Zhou. “It might be a crop of their feet, or elbows and hands holding food and that can come across as even more telling than a shot of their face. Combine that with exquisite piano music and you get something so incredibly moving. It can make even a shot of a McDonald’s burger feel so emotional.”

An Anime with Alvin video is a team effort, something Zhou enjoys as he’s able to collaborate with the people on the BCU team. The process begins with the concept, which can stem from either a popular request from the community, a currently trending anime or simply just something Zhou has always wanted to try. Sometimes, the dish is something that already exists in the real world, such as the pork katsudon from Yuri!!! On Ice. Other times, it’s a work of pure fiction that requires some artistic interpretation. An example of this is One Piece‘s “devil fruit” which Zhou crafted by making a fruit cake within a Japanese crown melon.

Not all videos, however, are created equally. Some can take half a day of filming while others require closer to two days of work. Something Zhou is keen to impart to his viewers is to showcase mistakes they make along the way (“everyone is human”) and that they avoid food waste as much as possible.

“I don’t like wasting food and it’s important for me to show my audience what we do with the excess food that we make,” he says. “In the Devil Fruit episode, I made a trifle with the cake scraps and leftover fruit. This is something I would have done personally if I was cooking at home.”

Zhou’s eponymously named personal channel is a bit of an open secret on YouTube. He never promotes it and has only published 11 videos. Yet, it has 1.4 million subscribers. It’s here that he’s able to indulge in a style of food videos that are made up purely of cinematic cooking shots, mood music and no narration.

He cites many Asian vlog channels that inspired him to pursue this — Zhou is also big on giving credit where credit is due — but the channel is mostly just his space to explore his craft without adhering to any algorithm-pleasing ‘must dos.’ The videos don’t follow a strict schedule and aren’t shot in the style of quick cuts, fast-talking and crazy thumbnails, the usual hallmarks of viral YouTube videos.

When asked about what it takes to be a content creator of his caliber, he says people interested shouldn’t be deterred by the high content production level these days.

“It’s a personal choice of mine to focus on cinematography. But that doesn’t mean you need to go down this path specifically. Start just by creating and learning things as you go, including how to operate a camera and how you edit. TikTok is proof that you don’t need any specific experience or tools to create content, just a great idea that can go viral.”

As the world begins to open up again, Zhou is keen to travel and shoot videos of food in the places that they are from so that the culture can be represented as honestly as possible. He dreams of filming a classic Chinese banquet restaurant in China and to capture falling snow in Hokkaido with the perfect piano track accompaniment. Fans of his work can look forward to feasting on upcoming content from Zhou, the kind leaving one hungry to taste and travel the world.