Residents of Japan have long viewed Izu fondly as an idyllic getaway. From hot spring hotels to white beaches, the peninsula overflows with diversions for all seasons.

Izu City, in particular, teems with picturesque natural scenery, offering a variety of vistas from which to experience the changing seasons. Keep reading for three peerless points from which to observe fall foliage, as well as three more locations where you can awe at the blossoming Toi cherry trees.

Koyo (“fall foliage” in Japanese) is only one of the pleasures of autumn in Japan. In Izu, you can usually spot the red, orange and yellow leaves from November to early December. This may change slightly based on yearly weather trends, so best check fall foliage forecasts while planning your trip. The Katsura Bridge spans the breadth of the Katsura River that flows through the center of Shuzenji Onsen town. It is known to be one of five bridges of love in Japan. A mere one-minute walk from Shuzenji Temple, the autumn hues observed at a short distance downstream from the arch offer a splendid Japonesque view of the bridge arching over the running water. Crossing the bridge leads into a neighboring bamboo grove. Located on the journey from Shuzenji Onsen to Heda, Shuzenji Niji-no-Sato is an expansive flower-based theme park where visitors can enjoy steam-locomotive memorabilia alongside the splendors of nature. During the autumnal season, where leaves of deciduous trees shift hues, the park illuminates them at nighttime for a fantastic fall illumination, creating a gold-and-copper wonderland. Connected to the Amagigoe roadside station, Showa no Mori Kaikan is home to a memorial hall housed in a 1,600-hectare nature park. It also hosts the Forest Information Centre, presenting the Amagi region’s flora and fauna through panels and videos. Other attractions include the Izu Museum of Modern Literature and the Izu Peninsula Geopark.

In the courtyard of the Showa no Mori Kaikan, broad leaves sported by the dominant trees turn to vivid colors in autumn and early winter. The log benches beneath their great umbrellas of foliage provide a perfect setting for contemplation, photos, or even a small picnic.

The Toi cherry tree is one of Japan’s earliest flowering cherry trees, usually starting to bloom in early January. The best time to see the flowers is in early February. As for the fall foliage, it is recommended to consult a local cherry blossom forecast a few weeks before traveling to ensure you catch the sakura in full bloom. 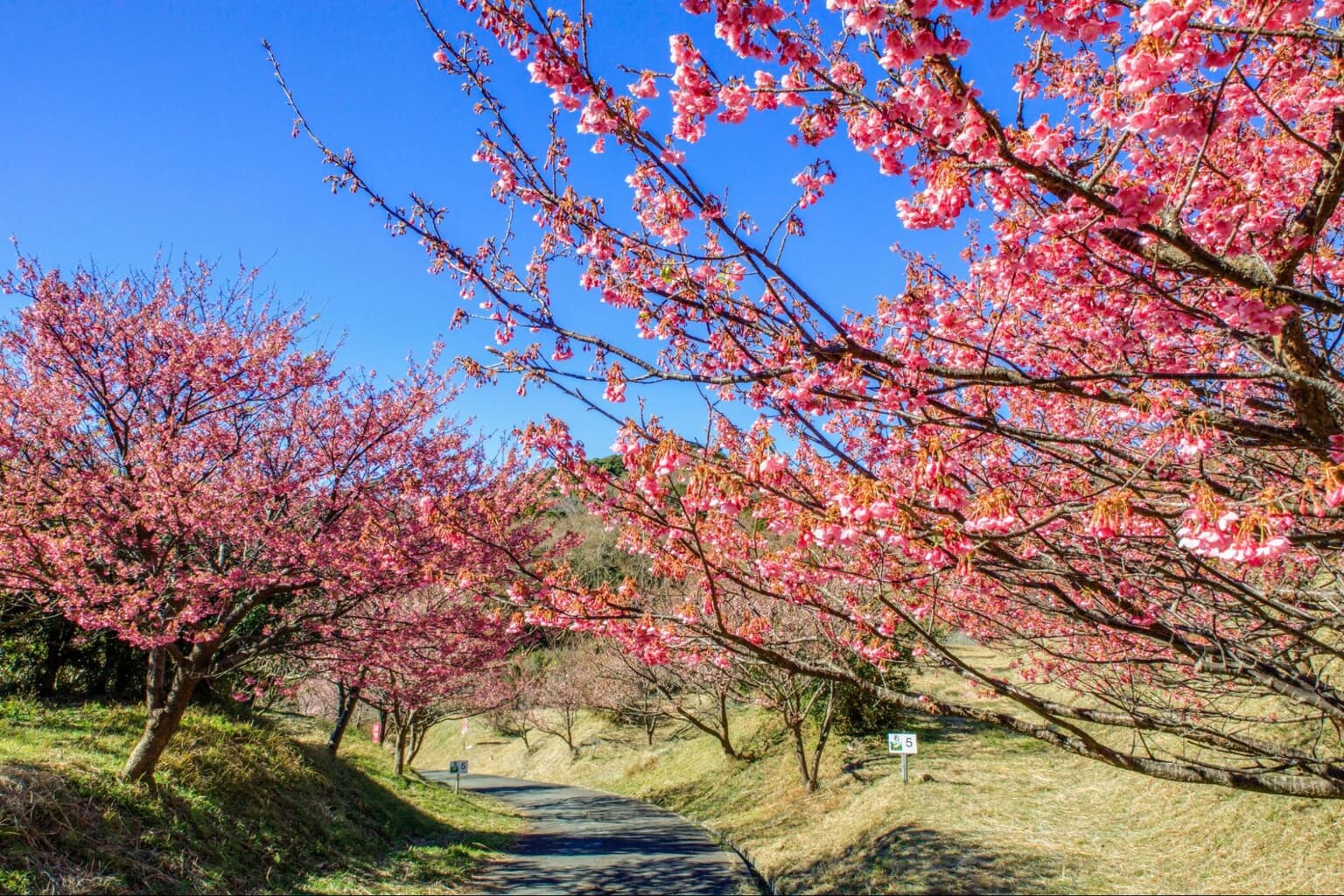 Rejoice in Toi cherry blossoms at Koibito Cape along Route 136, south of Toi Onsen town. The vivid blue skies, resplendent greenery and beaming yellow wildflowers of this region all help to create an astonishing tableau around the pink sakura. Stroll along the Fujimi promenade and up to an observation platform to catch a stunning view of Mount Fuji and Suruga Bay.

If you ring the ‘Love Call Bell’ on the observation deck three times while calling your beloved’s name, the love of your dreams will come true — at least, according to local folklore. This makes it a power spot for traveling couples. Toi Shrine is dedicated to the spirit of the Kamakura Tsurugaoka Hachiman shrine. The construction of the structure was commissioned by the Tominaga clan that ruled Toi Castle at the time. On its premises stands a camphor tree, estimated to be over 1,000 years old. According to a local legend, if you wish upon it, your prayers may be answered.

Much like the serene setting one finds at Lover’s Cape, Toi Shrine’s quietude provides picturesque framing for its dazzling cherry trees. Discovered during the Tensho Era (1573–1592), the Toi gold mine sat under the direct control of the Ashikaga shogunate. The gold and silver extracted here became the bullion used to produce the Keicho Oban koban, an old form of Japanese currency. The mine yielded 40 tons of gold and 400 of silver before its closure in 1965.

A portion of the tunnel was renovated to replicate its heyday’s mining conditions, and a hall was erected at the tunnel’s exit to display both the history of the Toi gold mine and materials related to the mining process. In 2012 the museum earned fame for housing the world’s biggest gold bar. Weighing 250kg, it was valued at almost 15 million dollars.

In the evenings of the Toi Cherry Blossom Festival, the trees on the grounds of the gold mine are lit up from below for travelers and locals to bask in their fabulous glow.

For more information on what to do in Izu City, visit the city’s official tourism website.