Shortly past 7pm, people begin gathering around a stall with an orange light illuminating a dark street near Kagurazaka Station in Tokyo. The shoppers include business people after work, local residents and passersby wondering what’s being sold. They carefully examine each pack of a variety of bread arranged on a few small tables. After that, they ask the staff about their recommendations or what the stall is all about.

Night Bakery, or Yoru-no-panya-san in Japanese, opens only at night, three days a week. The bread it sells is what was left unsold from different bakeries in Tokyo and other places. The staff selling the bread are usually vendors of the Big Issue street magazine and university students whose part-time jobs have been cut due to the Covid-19 pandemic.

The bread stall first opened a year ago and things proved tough early on. “My walk-in pitches at bakeries didn’t work out well,” says Nahomi Edamoto, a cooking expert and proponent of the Night Bakery initiative. Eventually things started to pick up. And judging by the crowds of shoppers at the stall on this particular night, it would suggest that the social drive to reduce food waste and create jobs is steadily gaining momentum. 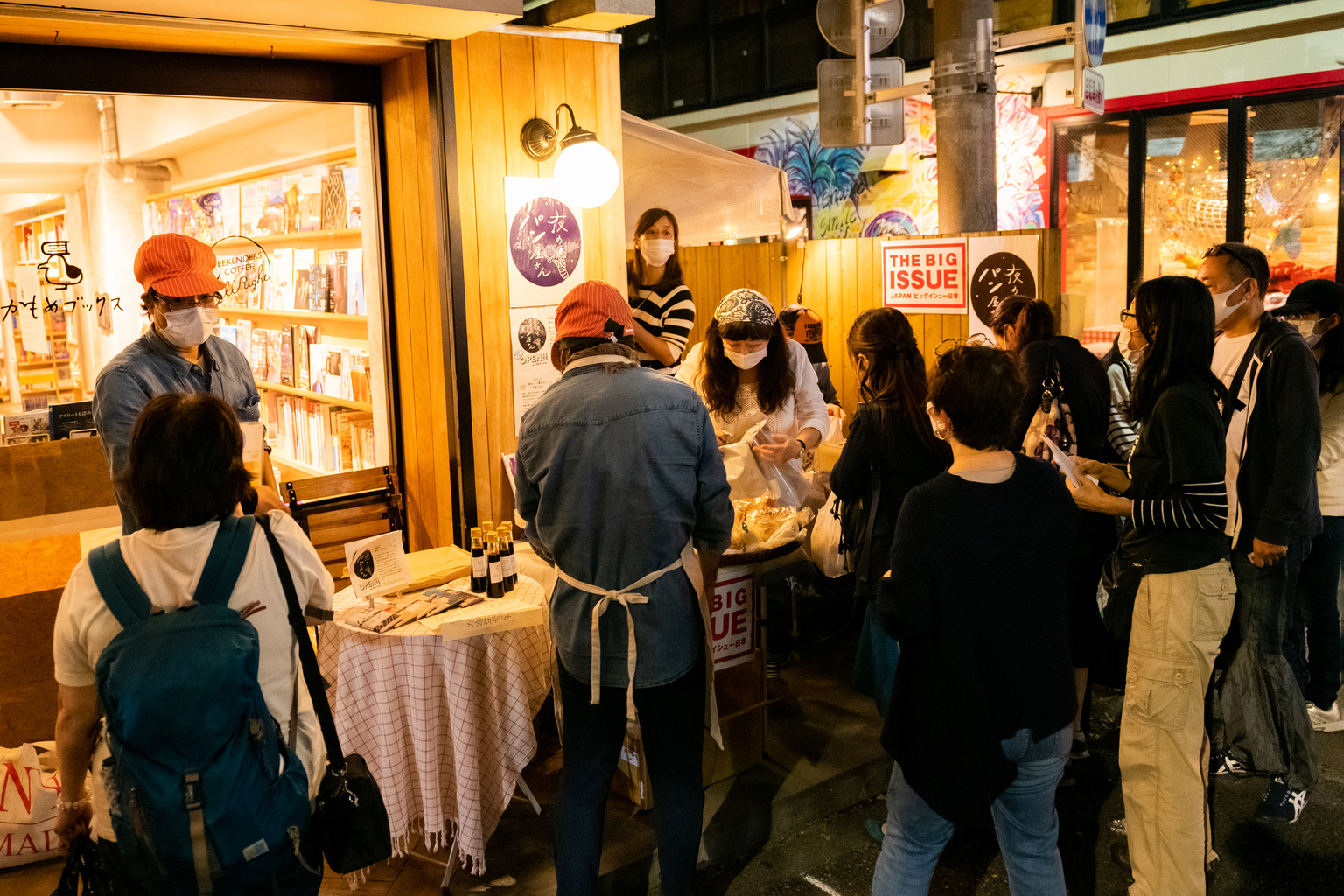 Night Bakery in front of Kamome Books in Kagurazaka.
Photo by Kazuya Asano

Edamoto started preparing for Night Bakery in 2019 after a benefactor offered donations to the Big Issue Japan Foundation where she serves as a co-representative. The donor wanted the money to be used in a sustainable way. The task for her and her team was to create jobs that went beyond selling street magazines.

Edamoto knew some examples of social projects to operate food shops and hire people in need. However, she felt they were too time consuming and expensive. “We couldn’t afford to rent a shop and provide necessary training for our vendors,” she says.

Then, Edamoto happened to learn about a bakery in Hokkaido. The store collects leftover bread from its branch shops and sells it at night. “I thought this could work for us,” she says.

“We have magazine vendors at different locations across the city and can let them pick up bread at nearby bakeries to earn extra money after selling magazines.”

The scheme was also ideal for Edamoto as she was deeply concerned about the issue of food waste as a cooking expert. “There are many bakeries in Tokyo but plenty of bread is being discarded,” she explains. “I wanted to change that.”

Edamoto started looking for bakeries to join her initiative, but most shops were doubtful and rejected her proposal, citing the unfamiliarity of such a sales approach. She was also struggling to find a place for selling the bread.

A breakthrough came when Beaver Bread, a popular bakery in the Higashi-Nihonbashi district finally offered to cooperate. The bakery owner agreed to offer bread and helped Edamoto get permission to sell bread in front of a bookstore. “Somehow, supporters came up whenever we were struggling to move forward,” she says.

Beneficial for Bakers, Sellers and Shoppers

Night Bakery buys unsold bread from bakeries and basically sells it for prices close to the original. Nonetheless, bread at the stall often sells out quickly, drawing business people and others unable to visit bakeries before they close.

Edamoto says having various kinds of bread, including baguettes, pastries and buns from popular bakeries at one location is an added advantage of her initiative.

“It’s not that we sell leftovers for reduced prices, but we collect and sell bread at night on behalf of bakeries,” she explains. “The project is not extremely profitable, but we haven’t posted losses either while managing to create jobs.” Night Bakery started with cooperation from only three bakeries. Currently, 17 shops collaborate. It now has another sales location near Iidabashi Station and recently opened a pop-up shop in Daikanyama.

“There’s a business practice that companies can gain more profit from when they throw away unsold food items rather than try to sell them for reduced prices,” Edamoto says. “But I hope our approach will become the mainstream business practice in the food industry.”

Her dream may come true before too long. Night Bakery marked its first anniversary on October 16, which is also World Food Day. Bread offered from all the 17 collaborating bakeries sold out as early as 7:30pm with shoppers, supporters and media reporters gathering. Hopefully, the appetite for progress spreads further.