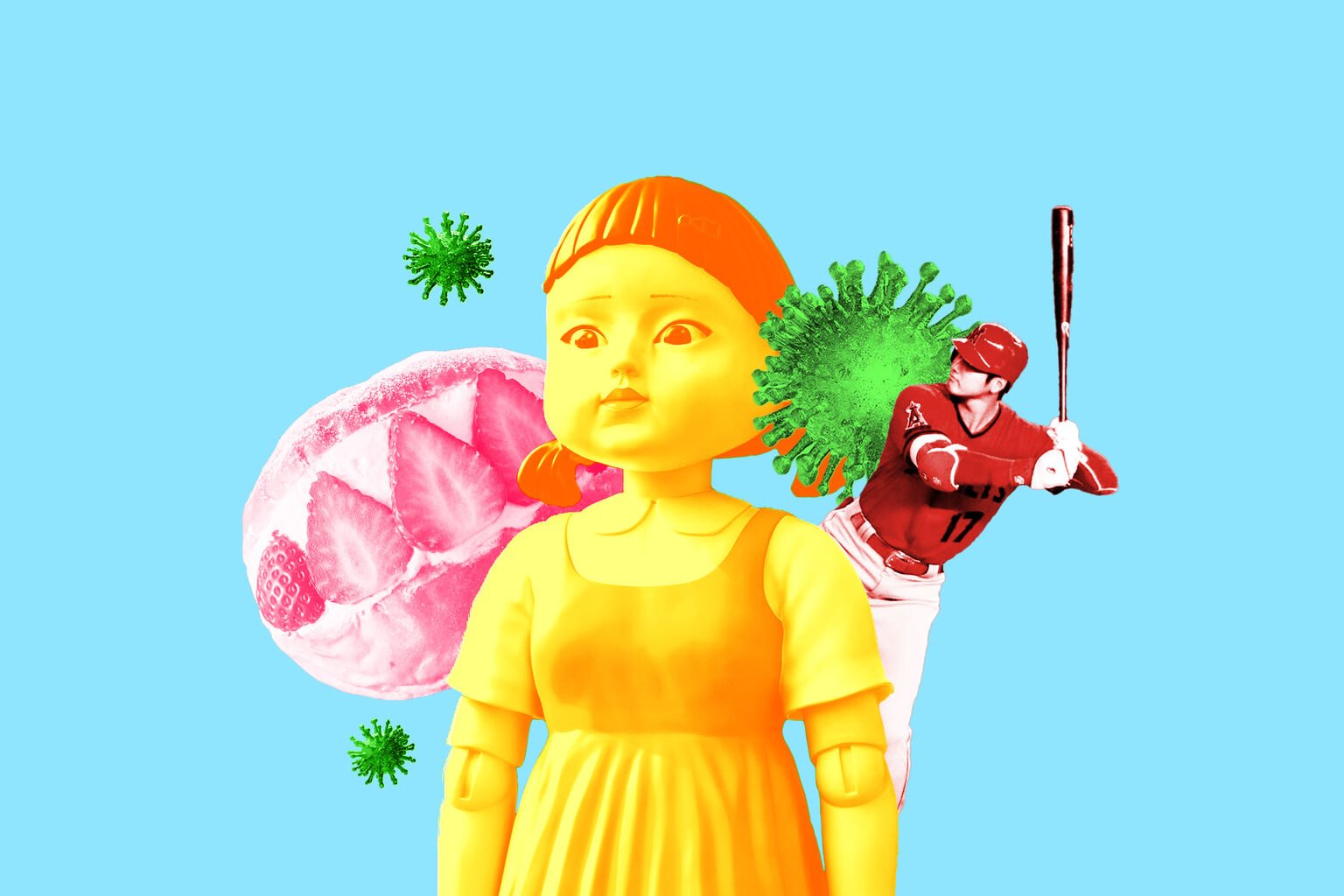 Japan’s Nominees for Buzzword of the Year Announced

Every November publisher Jiyū Kokumin Sha announces 30 contenders for the buzzword of the year in Japan. Unsurprisingly, the 2021 list is dominated by the Covid-19 pandemic and the Olympics. There are also nods to two-way baseball star Shohei Ohtani, an Italian dessert, a song about dissatisfaction and anger with society and Netflix’s most watched ever show. The winner will be announced at the start of December.

In other news this week, Fumio Kishida was formally re-elected as PM and chose Yoshimasa Hayashi as his new foreign minister. There was another attempted arson attack on a Japanese train and a nurse who killed three people in 2016 was sentenced to life imprisonment. We also report on the passing of two iconic Japanese female figures and the Samurai Blue’s latest FIFA World Cup qualifier.

In 2020 “sanmitsu” (a reference to the three Cs — confined spaces, crowded places and close-contact settings) was named buzzword of the year in Japan. Twelve months on and the list of contenders for 2021 again includes many words and phrases related to the coronavirus pandemic. With the increasing threat of “hen’ikabu” (mutant strains), the government had to be vigilant about tracking the “jinryu” (flow of people). Cases surged meaning many had to “jitaku ryoyo” (recuperate at home) as there was a lack of hospital beds. “Rojo nomi” (street drinking) became popular due to bars and restaurants closing. And in places that stayed open, diners were asked to “mokushoku” (eat in silence).

Many words are Olympic-related such as “gon-zeme” (fearless attack) in skateboarding and the karate move “chatan yara kusanku.” From the épée team to Mima Ito’s “chiquita” backhand and boxer Sena Irie’s “Kaeru ai” (love of frogs), gold medalists from the Games are well represented. As is Shohei Ohtani with “Sho-taimu” (Sho-time) and “Riaru nitoryu” (real dual sword wielder — referencing his ability as a pitcher and batter) both making the list. Other notable entries include “jenda byodo” (gender equality), “Z sedai” (generation Z), “oyagacha” (you can’t choose your parents), “uma musume” (horse girls — from a mobile game)  and the Italian dessert maritozzo. You also have “usseewa” (shut the hell up), the title of a 2020 song by Ado that took off this year. And then, there’s the Korean drama “Ika Gemu” (Squid Game), the most talked-about show of 2021.

Fumio Kishida was formally reelected as prime minister in a special Diet session on Wednesday. The Hiroshima-native first took office as PM in early October and was sworn in again this week following the ruling coalition’s recent election victory. He made just one change to his original Cabinet with Harvard-educated politician Yoshimasa Hayashi replacing Toshimitsu Motegi as foreign minister. The latter is taking over as secretary-general from Akira Amari who resigned last week. Hayashi, who is said to take a “pro-China” stance, plays guitar and keyboard in the LDP’s band Gi!nz.

The Cabinet is tasked with reinvigorating an economy that’s been battered by the Covid-19 pandemic. “The government will compile a package of economic measures worth several tens of trillions of yen by the end of next week,” said Kishida in an address to the nation. He confirmed that the ruling coalition had agreed to provide cash and vouchers each worth ¥50,000 to people aged 18 and younger. Households with an annual income of ¥9.6 million and above are excluded from the initiative.

A 69-year-old man from Fukuoka Prefecture was arrested on Monday for starting a fire on a bullet train in Kumamoto. Kiyoshi Miyake spread flammable liquid on the floor before setting a piece of paper alight. A conductor extinguished the fire after JR staff managed to overpower the assailant. Part of a seat was burnt, but fortunately no injuries were reported. The incident came a week after a stabbing and arson attack on the Keio Line in Tokyo. Miyake reportedly told the police he “wanted to imitate” that crime and take his own life.

Two days earlier, a man in his 50s pulled out an awl on the Tokyo Metro Tozai Line after a confrontation with two passengers over him not wearing a mask. Luckily no one was hurt and the man was arrested. In much brighter news, the 72-year-old man stabbed in the Keio Line attack on Halloween regained consciousness this week. The police plan to ask him about the incident once his condition improves. Sixteen others suffered from light injuries after Kyota Hattori poured lighter fluid in the train carriage.

Ex-Nurse Given Life Sentence for Murder of Three Patients

The Yokohama District Court this week sentenced a former nurse to life imprisonment for fatally poisoning three patients in 2016. Ayumi Kuboki put disinfectant into the intravenous drips of Sozo Nishikawa, 88, Asae Okitsu, 78 and Nobuo Yamaki, 88. She wasn’t arrested until July 2018 as the police didn’t have enough evidence. Her defense counsel argued that Kuboki had diminished capacity at the time of the crimes as she suffered from schizophrenia.

Prosecutors were demanding the death penalty. They stated that while Kuboki showed signs of autism spectrum disorder, it didn’t impact her decision-making ability. The 34-year-old admitted to the crime, saying she killed the patients to avoid the “troublesome” situation of telling bereaved relatives about their deaths. She orchestrated the situation so they would die when she wasn’t on shift. Judge Kazunori Karei concluded that life imprisonment was a fair sentence as she’d shown remorse for the crimes.

Buddhist nun and author Jakucho Setouchi died of heart failure on Tuesday. She was 99. The Tokushima-born writer won numerous awards for novels such as Places and The End of the Summer. Her vernacular translation of The Tale of Genji was a bestseller, helping to revive interest in Murasaki Shikibu’s classic story. Setouchi was known for her humanitarian work and outspoken views. She distributed medicine in Iraq during the Gulf War and staged a hunger strike to protest the reopening of Japan’s nuclear facilities.

Kazuko Hosoki also passed away this week due to respiratory failure aged 83. Japan’s most famous fortune teller, she published over 100 books and at one point could be seen on TV almost daily. She had her own weekly show Zubari iu wa yo! (I’m going to give it to you straight) and was a regular judge on the original Iron Chef series. She often did readings on celebrities, cutting off anyone she found rude. She predicted popular singer Seiko Matsuda’s divorce six months before it happened.

Junya Ito scored the only goal as Japan defeated Vietnam 1-0 in their latest FIFA World Cup qualifying game. Though an underwhelming display, it was a vital victory that moves them up to third in the table. They’re now just a point behind Australia who drew 0-0 with leaders Saudi Arabia. Coach Hajime Moriyasu again left Kyogo Furuhashi on the bench despite his fine form for Celtic. The forward bagged a brace for the Hoops on Sunday taking his tally for the season to 13 goals in all competitions.

In rugby, Japan were hammered 60-5 by Ireland at the Aviva Stadium in Dublin. After recently running Australia close, the Brave Blossoms were confident going into the game. However, the Irish were operating on a different level, scoring nine tries including a hat-trick from Andrew Conway. Johnny Sexton, meanwhile, celebrated his 100th cap with 16 points. Siosaia Fifita’s try aside, it was a very one-sided contest. Next up for Jamie Joseph’s men is a match against Portugal in Lisbon on Saturday.