This week is Tokyo: Get one last taste of autumn at some of the afternoon teas around the city, pop by Koki Arts for their latest exhibition featuring artist Evan Nesbit or get excited for the holidays with Tokyo’s yearly illuminations lighting up the streets.

Though the SOE is lifted, keep up with social distancing measures and limit unnecessary outings when possible. Shinji Terauchi is the fourth-generation head of Riso Porcelain, a renowned Arita ware manufacturer. He has been pursuing the creation of tableware that accentuates beautiful cuisines by learning from the early Imari style. For this exhibition, he will challenge works using only Izumiyama porcelain stone, which is the origin of Arita porcelain. Please visit HULS Gallery Tokyo and enjoy Terauchi’s new works created by facing the soil of Izumiyama that is now rarely used and its value should be revived. An online talk session event with the artist is scheduled during the exhibition period. Details will be announced on the gallery website and social media once the schedule has been confirmed. AgeHa is proud to host G-Tour: Dance Meeting, an LGBTQ club party held at the end of November. The main event is one of the biggest events of its kind in Japan, and it will take on the entire AgeHa arena. The top five groups will perform on the main stage for a chance to win ￥500,000 and be judged by Japanese media personalities. The Palace Hotel Tokyo is hosting a “Kanazawa Omotenashi” themed afternoon tea in collaboration with wagashi (Japanese confectionary) Kanazawa store, Yoshihashi. Yoshihashi was established in 1947 and is a renowned shop trusted by tea masters in Ishikawa Prefecture, selling only made-to-order sweets. This afternoon tea experience will be the first of its kind in Japan, designed to provide a unique experience for those who cannot travel to Ishikawa. Hotel Intercontinental Tokyo Bay is offering a special autumn afternoon tea at The Shop N.Y. Lounge Boutique. Enjoy sweets using chestnuts such as Mont Blanc and savories using seasonal pumpkin. For a limited time only, you can also purchase the special sweets to take home.

The autumn selection includes Mont Blanc with Uji green tea sponge topped with whip cream, chestnut cream and marron glacé, and a combination of marron mousse and buttercream. The savory menu includes tortillas filled with tandoori chicken and vegetables, chestnut and bacon quiche with a combination of sweet and salty flavors, and pumpkin salad with cream cheese dip, and mini pancakes sandwiched with smoked salmon and sour cream.

Loko Gallery is proud to present Shoko Masunaga’s exhibition “replace”. Upon planning her exhibition, Masunaga began by observing the gallery’s exterior, atrium structure, the skylight letting in natural light, and the difference between the ground and second floor spaces – to examine the purpose of the environment where her works are placed, and how time is indicated. Through this exhibition, Masunaga attempts to integrate the act of viewing with visual and conceptual effects which derives from the interrelation of the environment and the painting’s scale, shape, and color, by compiling tableaus on the wall which could also complete as a solo piece. The paintings available for reassembling or replacement are unbound by traditions, giving viewers the possibility to recreate by themselves and to intrigue their initiative.

6. Jasper Johns: Eyes in the Persistence of Form

Concurring with a dual retrospective at New York’s Whitney Museum and the Philadelphia Museum of Art, the new Jasper Johns show at Fergus McCaffrey looks at the artist’s later work, where his quintessential flags and targets give way to records of his memories. From around the 1980s to the early 200s, Johns moved past the exploration of internal, mental symbols to symbols of visual perceptions. In these prints, which were created between the American East Coast and St. Martin, a torrid storm (or is it a swirling galaxy?) features prominently. 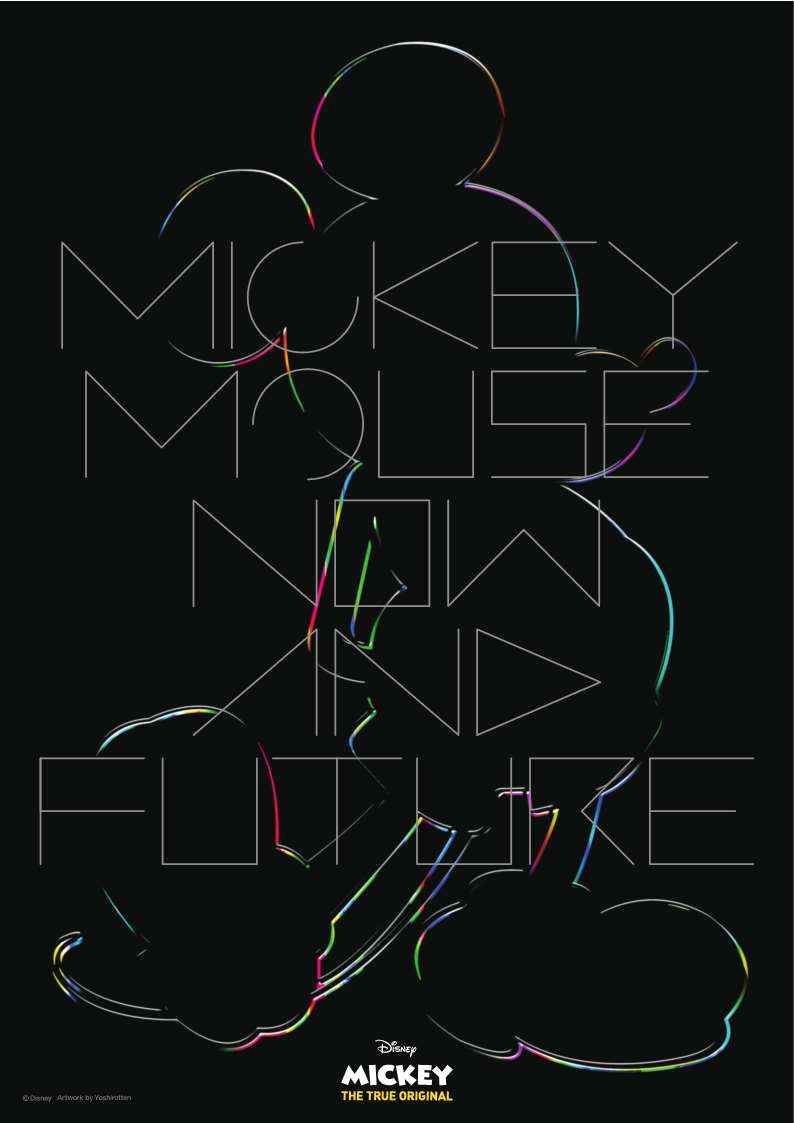 Parco Museum (4F of Shibuya PARCO) is proud to host the “Mickey Mouse Now and Future” exhibition is an art collaboration project that represents the present and future of Mickey Mouse under the theme of “Gathering of Fans” by artists from all over the world who love Walt Disney’s iconic character. The exhibition will be curated by NANZUKA, a contemporary art gallery in Shibuya. Born in 1979 in Hiroshima, Kawamura moved to Tokyo after graduating high school and immediately became involved in the city’s creative community. Initially a graphic designer, Kawamura became active as an exhibiting artist in the early 2000s, holding shows throughout Japan and overseas in conjunction with his collaborative and design work. Since then, his distinctive collage-based style has become well-known both within the Harajuku scene and abroad thanks to his prolific collaborations with Adidas, G-shock, Uniqlo, Gundam, Evangelion, Akira, and more.

The artworks featured in this exhibition were created largely through manual, hands-on methods such as cutting, shredding and pasting to emphasize the three-dimensionality and uniqueness of the works, a purposeful contrast to the digital reproducibility he emphasizes in his collaboration or commission works. The analog methods give the works a sculptural aspect, inviting the viewer to become aware of the physicality of the work and the exhibition space.

Lines perform representative and differentiating functions in painting. Line can be edge, border, contour, mark, or texture. Line is a means of suggesting, pointing, meandering, tracing, and conjuring. A line can mark a place, contour an object, and carry units of measure. Some lines are fuzzy, some lay shallow on a surface until layered or thatched. Regardless of its varying qualities, additive or subtractive, as a basic unit of visual language, line forms an armature to which meaning might graft itself by conjuring suggestive description in a line’s differentiating features. Pointing out from within, a line can take any material form, and differentiate itself from the things around it. Line reproduces itself, contradicts itself, and exhibits a level of subjectivity and expression wholly outside itself. Appellative Lines explores this notion, line outside of drawing, embedded within the materiality of painting as a catalyst to language. The Local Ramen Challenge by Tokyo Ramen Street started in July earlier this year. The event mainly consisted of the opening of a limited-time ramen store, Shina Sobaya. From November 12, Tokyo Ramen Street will initiate the second phase of the event by introducing Kumamoto’s Tengai Ten ramen shop to their selection. This is the second of seven local shops you’ll be able to taste during the event, and will only be open for about 100 days. The exhibition will cover the 50 years of Queen’s music, from their debut to the birth of “Bohemian Rhapsody,” the miracle of Live Aid, and their farewell to Freddie. The 50 years of the band’s career are divided into seven scenes along with major milestones, and places that symbolize each era (live venues, studios, etc.) are recreated and linked with photos, videos and documents.

12. Another Energy: Power to Continue Challenging – 16 Women Artists from around the World

This exhibition focuses on 16 female artists in their 70s or older, from across the globe, who continue to embark on new challenges. Ranging in ages 71-105 with their careers spanning over 50 years, these artists are originally from 14 different countries, and equally diverse in their current locations. Showcasing their wide array of powerful works from paintings, video, sculptures, to large-scale installations and performances, it contemplates the nature of the special strength, “Another Energy” of these women who have all continued challenging throughout their long-standing careers. Roppongi Hills comes to life when the whole complex is festooned with light, celebrating the season all the way along the Keyakizaka-dori, the Mohri Garden and the Christmas tree at Roku-Roku Plaza. Watch some 70,000 lights glitter along the posh streets of Roppongi. Enjoy the early signs of the holiday season as you stroll through the complex’ stores and hunt for mulled wine. 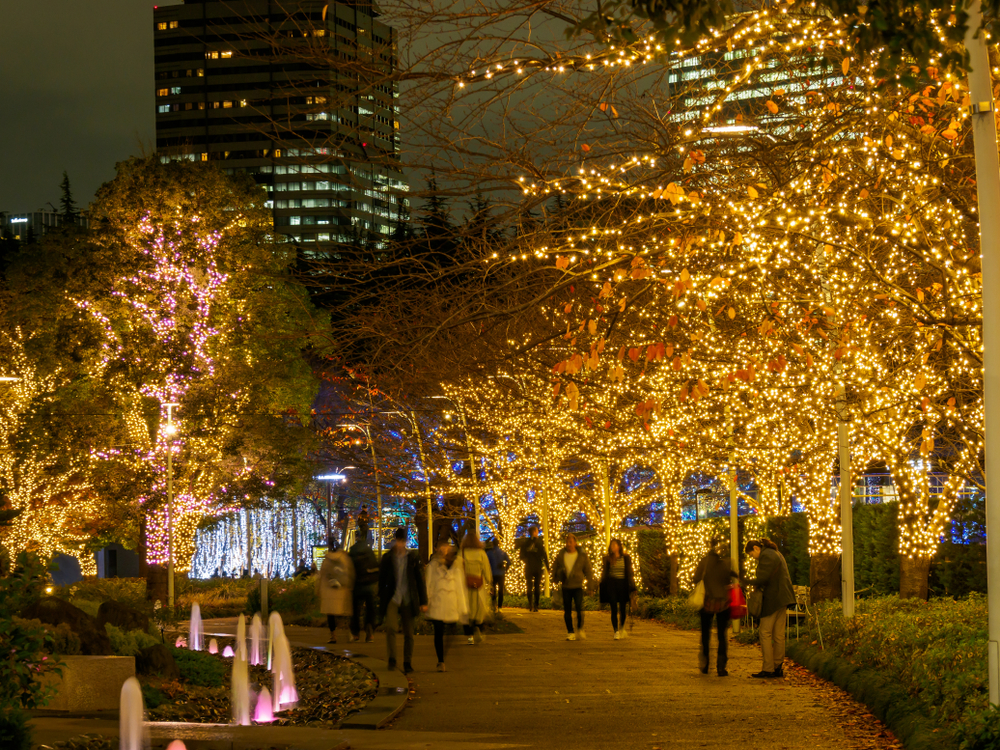 Under the concept of “Vivid,” this year’s festive event will present an exciting and colorful Christmas scene. In addition to the tree illumination, there will be snow globes trapping the beautiful moments of the four seasons, colorful trees marking the countdown to Christmas and other installations, including the popular skating rink, that will heighten your anticipation for the holidays. As with every year, around 340 trees on both sides of the Marunouchi Naka-dori street will be brightly lit by about 1.2 million “Champagne Gold” lights. The lights will be stretching from to TOKYO TORCH Park, and Otemachi Naka-dori street. Around TOKYO TORCH Terrace, many restaurants and cafes will have available terrace seats, perfect for relaxing and enjoying the illuminations. This year’s Christmas event will be held under the concept of “Japanese style and novelty.” In the atrium on the first floor, immerse yourself in a white winter wonderland created with approximately 12,000 sheets of washi snow falling from the ceiling. Keep your eyes open for other beautiful decorations throughout the shopping complex and Christmas deals at select stores. This year’s year-end dinner buffet offers a wide variety of Japanese, Western and Chinese dishes and sweets. Peking duck, sirloin roast beef and seasonal amberjack sake shabu-shabu are just a few of the freshly prepared dishes that will delight your taste buds. Enjoy the cuisine and the fantastic city view all while cherishing a wonderful and exciting evening with your family and loved ones.