“What will happen 100 years from now? Our lifestyle will change.”

Koji Murofushi’s office at the Japan Sports Agency’s facility in Kasumigaseki is a menagerie of artifacts that define his lifelong dedication to sports and his mission to teach everyone, not just Olympic athletes, how to perform to their fullest.

“Do you see those sacks of rice?” asks Murofushi pointing to three large bundles next to a life-size cutout poster in his likeness. “Each are 60k.”

The four-time Olympian (winning gold at Athens in 2004) shows a black and white photo taken 100 years ago of two Yamagata women, each of them shouldering five sacks of rice identical to those in Murofushi’s office. Murofushi, who holds a doctorate from Chukyo University’s School of Health and Sports Sciences, keeps the three sacks as a symbol of his philosophy towards fitness, as well as a Japanese symbol of good fortune.

He says fitness and exercise was once a part of the daily routine out of necessity for the farmers, woodcutters and fishermen of that era. This daily physical exercise is mostly gone from our routines, especially for those of us suffering from the “secondary damage” of the Covid-19 pandemic, side effects which include weight-gain and depression. Murofushi says sports need to be more integrated into our daily lives, especially in a country like Japan where sports, at least at the school level, are viewed as something in which only the top athletes participate.

“What will happen 100 years from now? Our lifestyle will change,” says Murofushi, who developed his own daily fitness routine since retiring from competition at age 41. “Then how do we balance between body and mind?… I believe through sports.”

Prior to taking his position as commissioner of Japan Sports Agency (JSA) in 2020, Murofushi was sports director for Tokyo 2020. In his previous role, his duties included ensuring a safe Olympics for athletes. In his current position, he focuses on the health, fitness and safety for all of Japan, as well as international competitors.

Ahead of the Tokyo 2020 Olympic and Paralympic Games, JSA conducted international and domestic sporting events, collaborating with government departments and international federations to test the protocols for successfully holding such events during the Covid-19 pandemic.

In addition, the JSA oversees all national sporting venues in Japan, including the new Japan National Stadium – home to the Tokyo 2020 opening and closing ceremonies. JSA was also charged with the safe entry and return of international competitors.

“To have the Summer Olympic Games for the first time in more than 50 years, [and] now we have a pandemic… I have learned so much,” says Murofushi. “We prepared so much.”

Though the Tokyo 2020 Olympics are over, Murofushi’s work is far from done. JSA was established in 2015. In 2016, then Prime Minister Shinzo Abe’s cabinet announced that as part of their economic plan sports’ total GDP output would increase from ¥5.5 trillion per year to ¥15 trillion by 2025, with sports tourism accounting for one-third of the total. Things looked bright when 400,000 international spectators traveled to Japan for the 2019 Rugby World Cup. In addition, JSA statistics show that inbound snow resort visitors nearly tripled from 2013 to 2017. However, the Covid-19 pandemic struck and in 2020, the number of foreign tourists visiting Japan totaled approximately 4 million, down from almost 32 million the previous year.

“I am sure people will come back to Japan later on once everything settles,” says Murofushi. “We are [looking at] this situation optimistically because we have great natural resources…. Geographically we can enjoy not only sports but also the facilities, onsen, hot springs and the food. I know that people will be coming back.”

Murofushi says that a recent JSA survey shows that 56 percent of international respondents want to visit Japan when the pandemic is over, more than any other place in Asia. Hokkaido’s potential bid for the 2030 Winter Olympics will also draw attention to Japan.

JSA also promotes budo tourism, or samurai tourism, as a way for future international guests to immerse themselves in Japanese tradition. For example, visitors to Kyushu can train under a kendo master, as well as experience Japanese arts such as flower arrangement or tea ceremony. In Okinawa, visitors can train at Japan’s home for karate and also dive in the blue ocean waters and enjoy other unique island traditions.

Learning the origins of the martial arts kata, or movements, helps rebuild our physical foundation, says Murofushi. For example, in the martial arts footwork, you learn to spread out your big toe and pinky, which originally helped rice farmers from sinking in the mud. In battle, warriors from one of Japan’s oldest sword schools learned that the position heightened awareness for those attacking from behind when they quietly sat on the floor.

“There is so much to discover, and to learn about it. I think is fun,” says Murofushi. “[Budo] tourism should be like that. You learn the history behind it, and how [people] live every day.” 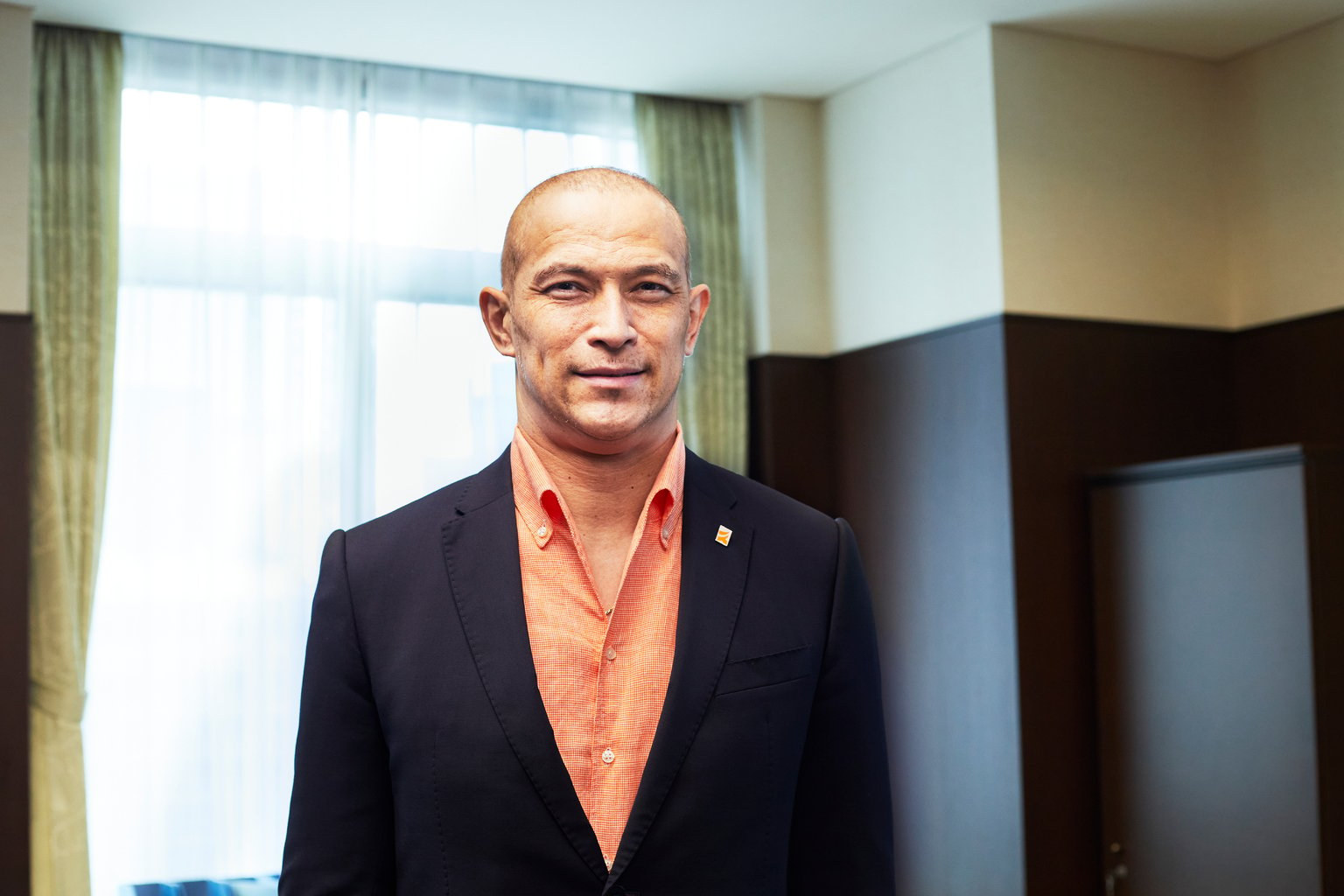 When he used to compete in the hammer throw, besides modern weight training in the gym, Murofushi also incorporated budo techniques into his workout. Murofushi would throw marbles in the same technique as a ninja would throw spikes. He cast a fishing net, not focusing on distance, but getting the net to spread perfectly. All those skills are connected to his hammer throw techniques to improve the distance and result.

“Besides, if you throw a hammer, you don’t get anything,” says Murofushi with his gregarious smile. “If you throw a casting net you catch fish.”

Based on his own experiences and the enormous potentialities of sports tourism and budo tourism, Murofushi believes the number of international tourists will grow in the future, helping in part to revitalize the regional areas of Japan.

Physical activity is also essential for everyone to benefit physical fitness and mental fitness. Therefore promoting health through sports is one of critical missions of both Murofushi and the JSA. A JSA poll shows that the number of adults participating in sports increased from 42.5 percent in 2016 to 59.9 percent in 2020. As a legacy of the Tokyo Olympics, JSA is setting a goal of 65 percent.

Being active in sports at an early age leads to lifelong benefits. It is vital to the JSA to put effort into children’s sports programs, enhance physical education and sports clubs and promote a lifelong sports society – similar to the sports culture Murofushi witnessed during his days traveling Europe for competitions.

Murofushi recalls an instance in between meets when he visited a training facility in Germany, where he was recognized immediately. However, he was told he couldn’t train that day because a group of elderly hammer throwers had reserved the field.

“They have cookies and drinks, and they were enjoying sports,” says Murofushi. “I want to bring that kind of atmosphere to Japan. These people have a lifelong love for sports, and that is our mission.”