TW Creatives: “The Boy I Met on a Plane” — A Short Story by Lisa Wilcut

Tokyo Weekender’s series TW Creatives features various works by Japan-based writers, photographers, videographers, illustrators and other creatives in a bid to provide one additional platform for them to exhibit their talent. The works submitted here belong entirely to the creators. Tokyo Weekender only takes pride in being one of their most passionate supporters. This time, we introduce a short story by Lisa Wilcut, a writer, editor and translator.

The Boy I Met on a Plane

(with apologies to Grace Paley)

Once I met a boy on a plane from Haneda to Sapporo.

“I’m going to see my dad. For the summer. My other dad, I mean, not my dad dad, the one I live with now.

“Know what? I had this dream last night. There was just one scene and it only played for a few seconds, kind of like a video. I think a plane had exploded and it was like the second right after that, but that wasn’t part of the dream. All it was, was me seeing a bunch of stuff, or I dunno, maybe I wasn’t really in it at all but I was just, like, somebody watching a movie, but since it was my dream it felt like it was me. I mean, like I was really there.

“Everything was so calm, and the sky was blue, blue all around, you know, really blue. I could tell it was some kind of plane thing because there were seats, you know like these, the kind you find in airplanes. And those oxygen masks that come down, they were all hanging there in mid-air. Probably there were people around, but I didn’t see anybody.

“The super cool thing was this microwave floating along and it wasn’t like, still attached to the galley or anything. It was just out there all by itself. Something was inside and I could see it ‘cause the light was on, but that’s crazy, right? Because it couldn’t have been connected to electricity. Not anymore.

“And then it went beeeeeep and it was done, whatever was inside. Like, who was going to eat that, right? But there it was anyway.

“Want to know the coolest thing I really saw from an airplane? When I was awake, I mean. One time, all three of us, me and both my dads, we were flying home from Hokkaido at night at the end of summer and we saw fireworks from the plane. First, they were a long way away, then we were pretty much right on top of them, and they were exploding under us, like those red spider lilies you see in graveyards, but in all different colors.

“Oh wow. I just said that two or three weeks was a long time. Man, I was such a little kid to think that. Now I go by myself for the whole summer. That’s long.

“So, why are you going to Hokkaido? Is that where you live?” 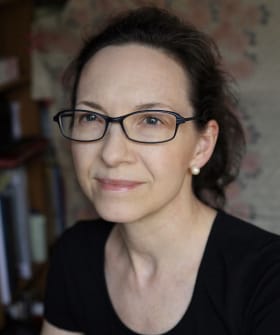 Lisa Wilcut is a writer, editor and translator based in Yokohama. She also teaches courses in philosophy and Japanese society and culture for the University of Maryland’s Global Campus. She is a member of Writers in Kyoto and another of her short fiction pieces was recently published in the anthology Structures of Kyoto.