“Gugu and Penfin Sleep” Is the Perfect Remedy for Restless Kids

There are almost too many choices. From Peppa Pig to Goodnight Moon, to the more kid-friendly renditions of Hans Christian Andersen and the Grimm Brothers, a parent might have to sift through volumes of “classic” bedtime stories before they find something that works for their child.

For Rachel Ferguson, mother of two and longtime resident of Tokyo, this was a particularly challenging project. But she eventually found two Holy-Grail books that, when read over multiple times, put her daughter to sleep. Taking elements from these merciful bedtime books, an inspired Ferguson created her own dream-inducing story, which would become Gugu and Penfin Sleep.

Her book follows the adventures of Gugu and her penguin plush toy Penfin on their journey to a peaceful slumber. The pair travel through space (sporting astronaut helmets), under the sea, on top of the trees and through a bed of flowers before imagining a gathering of all their loved ones. Then they doze off.

Ferguson realized that effective bedtime stories follow a loose formula, having to meet certain conditions, including: simple plotline; repetition and rhyme; naturally, euphony; a bit of comedy; soft, comforting imagery; and, in the illustrations, negative space for children’s imagination to flower.

She also believes the essential ingredient for Gugu and Penfin Sleep is the audio file, which comes as a QR code on the back binding. In the audio, Ferguson, seasoned in voice work, narrates the book herself. Her speech is nicely suited to the soothing story and is backed by pleasant, almost ambient music. The tape is meant to be played on loop after the parent reads, giving them some much-needed rest time. 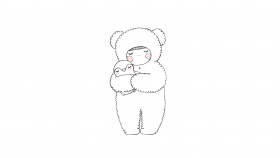 With charming illustrations by Hiroko Kuwada from creative duo POMPETTE, Gugu and Penfin Sleep has something of the feel of The Little Prince. Under the calm and sleepiness of the story at the surface level, there is a tale about connection and love – and that strange, dreamy liminal space we go to just before we fall asleep.

The biggest problem Ferguson encountered in putting her daughter to sleep, was how the child would sense her absence when she left the room. The audio tape is designed to fill that space with a warm presence. Moreover, the book is in English to expose children learning the language to its cadences and rhythms – a more natural and fun learning method, says Ferguson, than translating. And a relaxed environment is conducive to learning.

Currently, the Gugu and Penfin team are doing a Kickstarter campaign to help brace the costs of printing and shipping. Particularly, to maximize the comfort of storytime, Ferguson wants to print a board book with a matte finish, at a distinguished Japanese printer. The way a children’s book feels, she believes, is as important as its verbal rhythms. With certain pledges, a child in need will receive a copy of the book, and you will receive a digital copy. Higher levels will get you a video book or personalized audio book.

You can pledge and support Ferguson’s project here.