For our latest entry, we present The Lonely Harps Club, a harp-driven art pop project created by British harpist and songwriter Julia Mascetti. The music can be best described as cerebral yet infectiously catchy. Its influences include female pioneers such as Kate Bush and Björk. The Lonely Harps Club debut album Long Game is like a chest of treasures. The art pop is laced with dark undertones of hard rock, goth and metal along with hints of spoken word and trip-hop. The album also embraces the multilingual international reality of being an expat. There are titles like “Nommunication,” for instance, a Japanese portmanteau word which means to bond after work over alcohol. There’s also the German “Neuschmerz” and the Italian “Dilettante.” Mascetti credits her life in Tokyo and international friends as part of the inspiration for the album.

Long Game was released on May 14, 2021. The first promo song and video to drop was “Spin.” In it, Mascetti captures how manic it can be working in a creative industry in the 21st century. The song is fast and frenzied with catchy riffs. The “Nommunication” track explores similar themes, both in one’s work and private life.

“In Bloom” is a hauntingly beautiful track that embraces Mascetti’s Japanese influences, featuring the shamisen and “sakura” in the lyrics. The shamisen is played by Arthur Reiji Morris, with drums, delay and electronics by Riccardo Daga and Carlo Bellotti. It all comes together in an absolutely mesmerizing dreamy song. Similarly, “Purple Flowers” is a dark beautiful song any Goth would love.

At other times, the album is playful, funny, self-deprecating and cheeky. A prime example of this is “Dilettante,” a song described by Mascetti as “a humorous love letter to the wonderful group of international, artsy friends,” she had when living in Tokyo. With lyrics like “My friends and me are doing fine, no pension plans for me and mine,” “Dilettante” might just be the new millennial anthem.

Every song in the Long Game album could be an anthem to someone. “Magical Girls” and “Who The Hell Are You” are odes to pushing onwards while admitting to “wanting something more than this.” Finally, anyone who’s ever moved abroad will find all the complex emotions encapsulated in the song “Left.”

Long Game is both a musical and lyrical treat. It’s also an instrumental rollercoaster that plays out like a poetic protest. It just makes you want to play it on repeat.

Get the whole Long Game album by The Lonely Harps here 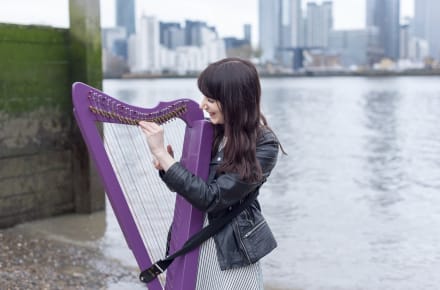 Julia Mascetti grew up singing in choirs. Influenced by her Welsh heritage, she began playing the harp aged 11. A lifelong fan of classical and folk music, she became drawn to a darker aesthetic and heavier music as a young adult.

At the age of 22, she moved to Japan and joined the metal band Gjöll with whom she performed for two years and recorded the EP Residual. She also self-released a folk-pop EP called In Distance, Everything is Poetry to a sell-out release party in Japan and favorable reviews in 2017. After returning to the UK in 2019, Mascetti signed with Epictronic and began work on a project that would combine all of these influences and more.

Julia Mascetti also has a parallel career as a writer and marketer.