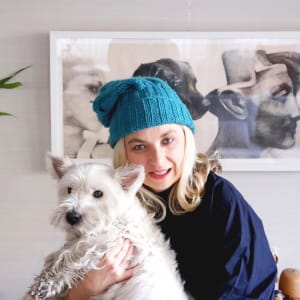 Women in Japan face countless issues, yet there are so many females here that have shown it is still possible to shine in a male-dominated society. Examples in the art and literature world include Murasaki Shikibu, the world’s first novelist and Yayoi Kusama, one of the most influential living artists. The current Tokyo culture scene also boasts a large number of amazing female artists, writers and directors, many of whom are international. Wanting to showcase their talents, we’ve decided to feature a selection of different female focused art and culture events in Tokyo.

This North Macedonian film has won numerous awards including the European Parliament’s LUX Prize in 2019. It was also nominated for the Golden Bear at the Berlin International Film Festival. The plot is inspired by a true story based around an Orthodox Christian Epiphany ritual. A priest from a local church throws a wooden cross into the river for a men-only ceremony. Whoever finds it will be lucky all year round. Instinctively, the titular character Petrunya jumps into the water and gets the cross. From that moment, a witch hunt begins. The town sets out to get the religious artifact back from the woman who “stole” it. The fact that she belongs to the same religion as everyone else is irrelevant to the locals.

“By challenging the idea of the actual sex of the supreme creator I want to put forward the idea of rebellion and the importance to rebel in order to change,” said director Strugar Mitevska. When many women and Eastern Europeans have been marginalized, her film’s success is poetic justice.

Despite the specificity of the cultural event that drives the plot, the theme itself is universal. Men-only ceremonies and traditions still exist around the world. In Japan, there’s the semi-naked Saidaiji Eyo Festival. Just like the cross ritual from God Exists, Her Name is Petrunya, hordes of men compete to find a stick (Shingi) in water and whoever gets it will be blessed for the whole year.

In the Netflix documentary Little Miss Sumo, a female sumo wrestler fights against tradition in order to compete. The ring is considered a sacred area where “unclean” women are forbidden from entering. Even when a mayor suffered from a stroke in the ring in 2018, a female nurse who was trying to save his life was asked to leave.

God Exists, Her Name is Petrunya is a story that should resonate around the world.

When: May 22 – Jul 2 in Tokyo | Different dates all through June for other prefectures and cities
Where: Iwanami Hall, 2-1 Kanda Jinbocho, Chiyoda-ku
Website: https://petrunya-movie.com/theater/

At Mori Art Museum there is a female art and cultural event that shines a light on artists who began their careers in the turbulent postwar years. Another Energy: Power to Continue Challenging displays the work of 16 female artists aged between 71 and 105. There are roughly 130 works in total, showing the beauty of different expressions, experiences and identities.

The exhibition contemplates the nature of another energy – that driving force or special strength that pushed these female artists on so they could have such long and distinguished careers. Collectively, the 16 featured artists come from a wide range of backgrounds and are very different in how they express their work. Another Energy also touches upon a number of global phenomena and issues including feminism and migrant history through the artists’ lenses.

Exhibition: A Breath Away by Shiori Horie at Kashima Arts

At Kashima Arts there’s a very different exhibition by the young talented artist Shiori Horie titled A Breath Away. It’s the same location where she held her first solo exhibition in 2014, the year she graduated from Tama Art University. This time, viewers will have the chance to view the first portraits Horie created with photography and some of her paintings that were adapted into book covers and illustrations.

Horie’s works pulsate between modes of melancholy and striking resilience. When you see her portraits, you feel an unconscious sense of strength that instantly brings you back to old times, like when you were a child. Perhaps it’s the teddy bear motif or the suggestive look of the subjects in her portraits. Or maybe it’s the power of the natural pigments that make up the entirety of her works.

“I am allergic to organic solvents,” she says. “Because I cannot paint with oils, acrylics, or any materials containing chemical substances, I specialized in Japanese painting and painted only with paints and pigments derived solely from minerals (such as iwa-enogu) or other natural materials, washi paper and glue. To me, natural pigments represent far more than materials for painting, rather, like a cell, they form the things you like by giving them substance.”

An example of strength and perseverance, A Breath Away is one of the Tokyo art and culture events to see.

Literature: Some of Japan’s most prestigious literary awards won by women in 2021

Women writers have been numerous and prolific in Japan’s literary tradition and are often a driving force behind societal change. This year, two of them won two of Japan’s most prestigious literary awards.

Rin Usami is a 21-year-old university student who won the Akutagawa Prize for her novel Oshi, Moyu (Cheer, Burn). Usama’s story depicts the life of high school girl Akari, whose life falls apart when her favorite idol is involved in a scandal. For her previous novel Kaka, Usama also won the prestigious Bungei prize and the Mishima Yukio Prize.

The Naoki Prize was won by 56 years old Naka Saijo for her book Urasabishigawa (Lonesome River). The book is a collection of six short stories that take place during the Edo period in Japan.

Both books are yet to be translated into English, so in the meantime, I recommend reading the newly translated books of two other outstanding female writers. The Woman in the Purple Skirt by Natsuko Imamura is a story about manipulation, obsession, control, and unhealthy relations between women. Breast and Eggs by Mieko Kawakami was the most translated Japanese book in 2020. If you’ve already read it and liked it check out her novel Heaven.