Dave Spector – “Home is Where You Hang Your Hat”

Japanese TV personality Dave Spector, and his wife Kyoko, allow TW to peek inside their LA-inspired, high-rise residence in Tokyo

Dave Spector delivers a joke like a Mashiko potter throws a clay bowl – quick, well-crafted and rough around the edges. For decades Spector has been the voice of America on Japanese television, interpreting the world of American politics, entertainment and celebrity gossip for the masses. His insight, anecdotes and one-liners require punch and spontaneity, and like Japanese pottery, they require the timelessness and artistic imperfection that can only be sculpted over a lifetime of insatiable dedication to the craft.

“Like today,” says Spector, who appeared earlier that morning on the program “Wide Scramble” on TV Asahi. “I said, [the government’s Go-To Travel campaign] is going to be ‘Go To Hospital.’”

Just as Spector’s TV persona has been carefully molded over the years, so has the interior design of the home he shares with his wife, Kyoko. The Kioicho Building in which the Spectors abide shares a neighborhood with Hotel New Otani, and is also home to celebrities, singers and the offices of music executives – and Spector Communications. The Spectors moved into the building after the end of the Bubble Era, and about a decade ago relocated to their current double suite. Dave Spector’s home studio was formerly the bedroom and living room of a retired Japanese tennis champ.

It is here where our tour starts. High atop a bookshelf highlighted by framed photos of Japanese celebrities and foreign dignitaries is a model of a Chicago Tribune newspaper truck, a reminder of Spector’s hometown. In his youth he lived in the John Hancock building, at the time the world’s tallest apartment building, which is why he feels at home living high above the Tokyo landscape. “You could call it high-rise living,” he says. One wall is lined with files that include copies of National Lampoon magazine, for which Spector was a regular contributor, VHS tapes from his early days as an associate producer on The Richard Simmons Show and his “secret file” on Caroline Kennedy. The home studio has five TV screens that air Japanese news shows congruously.

I have to be like a sponge. I don’t want to just go on and say a blanket comment that anybody can say. It’s not fulfilling. It’s not rewarding. It could be any other commentator.

“For me, I made it my life’s work. I know all the shows. I am like a walking TV Guide. I know exactly what people are talking about,” says Spector, who reads multiple newspapers daily, from America and Britain in particular. “I have to be like a sponge. I don’t want to just go on and say a blanket comment that anybody can say. It’s not fulfilling. It’s not rewarding. It could be any other commentator. So I try to earn my keep.” The ongoing coronavirus pandemic means that Spector has spent many days inside his home studio. He bought LED lights that reflect off the ceiling. He uses JBL speakers for audio. For his Zoom background, he organized his old reel-to-reel tape recorder and an “on air” sign, hearkening to Spector’s beginnings in radio. The audio lag between his home studio and the TV show’s host made live streaming from home a chore, since Spector’s delivery depends on lightning-quick timing. He learned a few tricks, such as calling out the host’s name to get his attention. These days, for the most part, his work has returned to the TV studio, where Spector feels at home.

“We are very fortunate in that [Covid-19] hasn’t affected us very much to be honest with you,” says Spector.

While Spector’s home office is a Rorschach’s inkblot test depicting his entire career, which brought him to Japan in the ‘80s as a producer for the TV show Ripley’s Believe It or Not, the main home is Kyoko Spector’s masterpiece, and every room shares a story about the couple’s life together. They met in Los Angeles when Dave was a young hotshot producer and Kyoko was a concierge at the LA branch of the New Otani Hotel. Even in their first home together they decorated their interior in the same black and white aesthetic, with accents of solid color.

So while their grand suite today is adorned with Andy Warhol paintings, a Baccarat crystal chandelier in every room and Versace wallpaper in the bathroom, the black and white piano sitting against the wall of the vast living room was purchased from Han’s Music on Wilshire Boulevard in LA’s Koreatown when they were still newlyweds.

“The reason we bought the piano was because we had a black and white cat,” says Kyoko Spector. “We can’t play, not at all. It was just because of the cat.” The minimalistic kitchen is also decked out in black and white industrial cabinets and appliances. The master bedroom displays accents of plum and the same upscale hotel décor that permeates the residence, with the centerpiece being the same bed the Spector’s first bought when they got married.

“We have so many memories,” says Kyoko Spector. “I wanted to keep it simple. That means it looks clean and the room looks bigger. In a Japanese apartment everything is visible. I don’t want to put these little tchotchkes here. It’s just minimal.” The showpiece of the home is the living room. Windows line two walls with landscape views of the Akasaka Imperial Property, the New National Stadium and of course Mount Fuji. Much of the furniture is imported from LA and other international cities. There is a wet bar with a marble countertop. The space is designed for entertaining diplomats, socialites and the occasional Japanese celebrity.

Kyoko Spector hosts Japanese tea parties and sushi dinners served by a professional chef. During the Meiji Stadium summer fireworks display, which can easily be viewed from the Spectors’ balcony, 50 guests were served hot dogs just as they would at an American summer festival. This summer the Spectors’ parties have been smaller, with no more than six to 10 guests. Their multiple wine cellars are fully equipped for when the parties can resume. Kyoko graciously shares a bottle of Israeli red gifted by the Israeli ambassador.

“We renovated everything ourselves,” says Kyoko. “When we move out we have to put it back, and that costs more than it did to build it.”

“So the idea is to never move out,” says Dave Spector. Just as a potter constructs a kiln to perfectly craft their pottery, the Spectors designed and furnished their home to make sure they always perform at their best.

“Anywhere I hang my hat is my home,” says Dave Spector. “As far as this home, I guess we are just always happy here.” 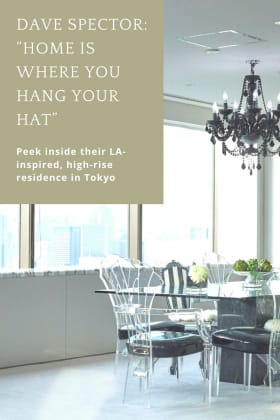