Being inspired by others herself, Ortiz’s new mission is to inspire a new generation of volunteers – and leaders

No event in the past 50 years affected the current makeup of Japan as much as the 2011 Tohoku earthquake and tsunami. Tokyo-based social impact entrepreneur Angela Ortiz talks about how the disaster served as a catalyst for social change in Japan — and changed her life.

As a young adult Angela Ortiz thought volunteers were people that were being manipulated, were religious fanatics or were successful people with a guilty conscious. Now 38, Ortiz is the volunteer representative director of the Tokyo-based NPO Place to Grow and senior manager of corporate social responsibility for Adidas Japan.

“That was around 16 when I realized I don’t believe in the Christian dogma anymore.… I came to the conclusion that it was all bullshit,” says Ortiz. “I think also another aspect that may be more personal, but just being a single parent and having a child at such a young age, financially everything was quite tight. I struggled. I never saw myself in a position of empowerment to help other people — the experience in Tohoku was mind-blowing.” What started as a handful of individuals volunteering in the city of Minamisanriku following the 2011 Tohoku earthquake and tsunami, is now the longest-running international NPO in the Tohoku region. Thousands of volunteers have gone through Place to Grow, which started as an organization called OGA for Aid. Ortiz’s new mission is to inspire a new generation of volunteers – and leaders. “[Ten years ago] I thought I would have my own school for art and math. I had just started that right before 3.11. That’s probably what I would be doing now,” says Ortiz. “But no. Instead it has been this whole other journey.”

In the early days following 3.11, the press dubbed Ortiz as the Lara Croft of Tohoku as she was photographed in all-black, special ops-like gear and clothing. Today, she has turned in her black boots for Adidas recycled ocean plastic running shoes. When we first meet at a Shibuya café, she wears black gym shorts, a sporty green tank top and a fitness-tracking smartwatch. In the past two years she completed two grueling Spartan races. She is disappointed this year’s world championship was canceled due to Covid-19. Instead, she launched a Bootylicious exercise class. “I can’t stress it enough how important it is to work out your butt,” says Ortiz. This summer Ortiz self-published a book titled Place To Grow: 8 principles that will make you an effective leader in social impact. The book started as a guidebook to explain the methodology of Place To Grow to new volunteers, and turned into what Ortiz calls “a cheat sheet for aspiring social impact entrepreneurs.”

“Disasters are always happening, especially in Japan. That motivated me to not just problem-solve but create a model”

The eight principles include lessons like “you matter when you choose to,” “why the details matter so much” and “people inspire people” — all realizations that came to Ortiz over the course of a decade of volunteer work in Tohoku. Ortiz’s family moved from California to Japan in the 1980s “for the adventure.” She grew up in Saitama and at age 14 her family of 13 moved to Aomori city, where a six-month stay turned into a lifetime deployment after Ortiz’s father founded the Ortiz Global Academy. Miserable as a teenager, Ortiz remembers spending winters shoveling snow three times a day and creating a secret code to send faxes to her friends in Tokyo.

After giving birth to her daughter at age 20, Ortiz moved back to Tokyo. She launched her own after-school kindergarten. Then 3.11 happened. Days after the disaster her father was hired by foreign journalists to guide them to Minamisanriku, a resort town on the east coast of Miyagi Prefecture. There, 95% of the town’s infrastructure was washed away. “It looked like in one of those apocalyptic movies. You know, something you might see in a Marvel film,” says Ortiz. “Ten-ton trucks were sticking out of five-floor windows. The trees looked like they had been horribly decorated for Halloween. Entire bath units were dangling from trees. It was just unreal.” Ortiz arrived in Aomori on March 19 where her siblings had already set up a website and Facebook page for OGA for Aid. Ortiz previously worked at Hotel Aomori and contacted them for supplies, to which they agreed. When she arrived, a former co-worker asked her to take a package of letters and newspapers prepared by the grandmother of a boy she had worked with named Yosuke Watanabe. Yosuke now worked at Hotel Kanyo in Minamisanriku.

When Ortiz arrived in Minamisanriku with her family, they realized providing aid wasn’t as easy as they expected due to bureaucratic regulations and general disorganization. So Ortiz headed to Hotel Kanyo to deliver Yosuke’s package. Without power or electricity, the hotel staff took in the Ortiz family and the hotel became OGA for Aid’s base of operations. “They served us miso soup and rice and we were like OK this seems weird,” says Ortiz. “They were so excited for us to be there. I realized they were able to fulfill their job that night. I just remember going to bed thinking, oh this is very complicated. That’s also when I realized people inspire people, and it’s often not what we think.” Since the local government of Aomori wasn’t technically allowed to deliver aid to Minamisanriku, they asked if it was OK to direct volunteers to OGA for Aid. OGA for Aid partnered with HOPE JP to supply water and the Tokyo-based NPO Second Harvest to supply food. Ortiz was now the administrative director of OGA for Aid.

Ortiz spent many of her summer nights sleeping on the moldy cots at Hotel Kanyo, expanding support throughout the region by day. By September, they set up a community center at the hotel where they provided English and computer classes. The network grew to include 2,800 families in 32 locations across three cities. The first arrival of volunteers were foreigners or Japan residents from Kobe and other areas that had experienced disasters. Ortiz says it took three to six months before large Japanese corporations were jolted into action. To this day, Ortiz says most of the volunteers in Tohoku come from the Japanese corporates. “In Japan, many academics and researchers consider the Hanshin Earthquake in Kobe in 1995 to be the spark that started individual volunteering in society here. In the same way, 3.11 launched the trend of corporate volunteering as a win-win for the companies to be able to connect with and give back to their society,” writes Ortiz in her book.

In 2016 OGA for Aid rebranded as Place to Grow. The mission is to “inspire the next generation of Tohoku through language and fitness,” says Ortiz. They set up a pen-pal program with students at international schools in Tokyo, and in turn the students in Tohoku send letters to kids in other disaster-struck areas such as Nepal and The Philippines. Every year they host the Santa Soul Train celebration – though this year it will be held virtually online due to the ongoing Covid-19 pandemic. “This is our 10th year. There are children who have never known life without the Santa Soul Train in their town. And that’s pretty cool,” says Ortiz. Ortiz and members of the organization are also working on developing a new model for disaster management community building.

“With any other industry, you have people innovating, problem-solving, and this is probably the most basic fundamental thing – disasters are always happening, especially in Japan. So that motivated me to not just problem-solve but create a model,” says Ortiz. “I think that will be a good contribution to the next generation of social impact leaders.”

For more information on Place to Grow and how you can help the organization, see their website at placetogrow-ngo.org 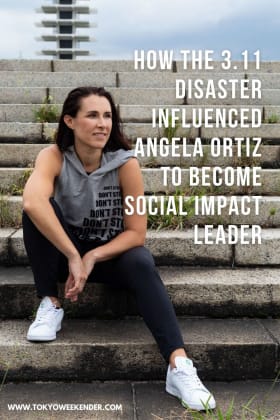