"They’re authentic. You don’t have to try and make it something that it’s not"

They say God doesn’t give with both hands, but Irwin Wong has a double dose of talent. Not satisfied with editorial and commercial photography work, he not only took all the photographs but also wrote all the text for his book Handmade in Japan, which was published September 1. Tokyo Weekender booked a Zoom call with him one hot August morning for a chat about his work, the importance of authenticity, and his post-Covid-19 travel dreams.

Wong has long been fascinated by Japanese craftsmen, but it was his fondness of robots and robot anime that first piqued his interest in the country. At university, he took a two-month study tour to Kanazawa and was enamored with the coastal city and the potential Japan held for him. He moved to Japan in 2005, and while it would be easy to say “and the rest is history,” it was never a straight path to professional photography. At first, it was just a passionate hobby – something he picked up in high school after borrowing a friend’s SLR camera. It wasn’t until he was settled in Japan that he started taking it seriously.

“I made a friend who was a camera buff and we kind of challenged each other. We helped each other grow. That helped me develop my skills and gave me a framework for being able to work in a professional setting. I taught English for about three years and after that I decided to go full freelance with photography. That was my transition. Which was a stunningly arrogant move now that I think about it, but it worked out. So I guess sometimes you’ve got to do that,” Wong says and then chuckles.

He seems amazed at his own audacity back then, but the Melbourne-born photographer’s portfolio is as impressive as it is diverse. His client list speaks for itself: Nike, Apple, ANA and Shiseido are just some of the big-name brands he has worked with. His portrait subjects include Japanese YouTuber Hikakin, Muji’s representative director Masaaki Kannai, and the now-infamous Carlos Ghosn, while his editorial work showcases unique Japanese scenes such as bull sumo, cormorant fishing and plastic food making.

Wong says, “With editorial jobs there’s a lot of variation in what kind of work comes through the inbox. And you know, Japan is such a varied place, right? So there’s bound to be a myriad of things you can take photos of, and see, and visit. Just like, whatever looks interesting. A lot of my clients are from overseas, so it’s nice to wake up and there’s an email in my inbox for a job – it’s like Christmas.” The variety is no coincidence. As a working creative, it’s important to keep the ideas flowing and finding new outlets. “I get bored really easily. So even if I were sticking to one thing, it would probably make me bored and sad. Finding that something new can be a creative practice in itself – you have to sit down and think about it. I also want to do things that other people aren’t doing, or that aren’t easy for others to do. I guess that competitive mindset comes into it too. How do I do things that are not already out there? Or how do I do it differently?” But finding that inspiration isn’t always easy – especially when there’s an ongoing pandemic. Wong says, “It’s been difficult for photography this year because I haven’t really been outside to walk around and look at stuff or see people to photograph. So recently, I’ve started doing CGI. That’s what I’m obsessed with right now. The applications it has for photography are limitless. That’s something that will be an extra tool in my toolbox. I’m learning and having a lot of fun with that when I can. It’s been keeping me occupied creatively during this whole period since I can’t get out and photograph things.”

One of Wong’s pre-Covid-19 creative outlets was traveling around Japan and meeting, as he puts it, “interesting people.” What started as a labor of love – a personal project that allowed Wong to hone his skills when he wasn’t shooting for work – became Handmade in Japan. He could have chosen any subject, but he chose craftsmen for several reasons. “I wanted to go and photograph these artisans because they embody a lot of values that I admire. Things like dedication, skill and not ever being totally satisfied with where you’re at. Always wanting to be better. I like that. Also, they’re very easy to photograph,” Wong says with a laugh. When we seem unconvinced – many Japanese artisans work alone, are hard to find and seem to have an impenetrable aura – he says he interviewed 60 to 70 craftsmen for the book and he was only rejected once. Sometimes he had the help of local tourist organizations and NPOs to find potential subjects or get introductions, but most often he made a quick phone call and the appointment was booked for the next day. From there, it was a breeze. “You’ve got these people and their workshops, the thing that they’re making. They’re just there and it’s already this perfect setup,” says Wong. “They do their thing, I photograph them and then you set up a little portrait for an opening shot, and everyone looks great because they’re the real thing. They’re authentic. You don’t have to try and make it something that it’s not.” The part after that – putting the book together and publishing it – would prove more challenging. After approaching several publishers, Wong landed a deal with Gestalten and set to work. Handmade in Japan was originally planned for March – ahead of the Tokyo 2020 Olympic Games – and the contract was signed in June 2019. Wong had about half the material he needed, which meant he had to gather and write the remaining 50 percent by November 2019.

Wong shakes his head and laughs as he recalls the time crunch. “It was really crazy. I had to get it all together in just five months. It almost felt like I was cramming for university exams or something. But it reads pretty well. My God, all those words. I mean, I can write, but it doesn’t suit my temperament. Play to your strengths, as they say. But I wrote a book, so hey! And it’s actually longer than what the publisher originally commissioned, but I’m really glad because it meant I could include one of the artisans who has now passed away.” Wong flips to the page of Shokichi Watanabe, a famous indigo dyer in Gujo Hachiman, Gifu Prefecture, whose son has now taken over the family business. He adds that despite the extra pages he had enough material for a book and a half, so there may be a sequel. But it will have to wait. “I want to give it a break, because I don’t want to only be known as the artisan guy. So I’m working on another book now. Maybe I’ll put a new spin on it later,” he says.

While Wong is coy about the contents, he hints that it will be Japan-related. It seems his passion for the country shows no sign of waning – even after 15 years he still finds inspiration everywhere. Even though Wong has spent at least one night in each of Japan’s 47 prefectures, he still feels it’s not enough. “You want to go deeper in some places. Obviously Kansai is awesome because everything is so close. You’ve got Kyoto, Nara, Osaka, Hyogo — they’ve all got cool things in their own right. It’s like a playground. Kyushu I love; I don’t get down there enough. I want to go and do a big drive around Kagoshima and Miyazaki and Kumamoto. That whole area — the south of Kyushu — looks like so much fun. I could go on forever. Setonaikai? It would be cool to go to all of the islands. I want to do the Shimanami Kaido, but I don’t cycle. That would make a great story, though. Now I’m getting all antsy to go somewhere, even though we shouldn’t. Well, it can’t hurt to dream!”

Until it’s safe to travel again, make your next trip a virtual one to the workshops of Japanese craftsmen. Handmade in Japan is on sale now for ¥5,900.
More info at gestalten.com/products/handmade-in-japan

We have a copy of Handmade in Japan to give away to one lucky reader.
To be in the running, send an email to [email protected] with your full name and postal address, plus a few sentences describing your favorite Japanese craft and why you love it. 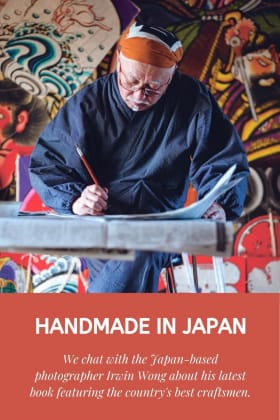