Popular souvenirs from Japan include limited-edition products such as wild variations of Kit-Kat bars or peach-flavored Coca-Cola, with the same extending to alcoholic beverages from beer to sake. One sake brewery, Asahi-Shuzu, is jumping aboard with its limited-edition Kubota Manju Muroka Nama Genshu sake.

What makes the latest addition to the Kubota Manju series special is not that it is brewed in winter, which is considered the best time for brewing, but the way it is made. “Muroka nama genshu” refers to a relatively new type of sake recently growing in attention that is sometimes referred to as “no make-up sake.”

The sake brewing process is a long one starting with the polishing of the rice. The more layers of the rice are removed, the more refined the final product will be – hence the higher price. The rice is then stored in silos until it is washed, steamed, cooled down, and turned into a mash, which involves three stages itself. The main mash is then pressed to collect clear sake, which is then filtered, pasteurized, diluted and finally bottled.

Muroka nama genshu sake, on the other hand, is the embodiment of the phrase “less is more.” The process ends with the collection of the clear sake after pressing the main mash, essentially making it unfiltered, unpasteurized and undiluted. Decades ago, it would be preposterous to sell this monster of sake as it was considered undrinkable and for good reasons.

The filtering process is essential to remove components in the sake whose presence would leave it tasting foul and give it an unpleasing color. Since that step is removed from the whole brewing process, that means that the sake retains those elements that spoil the taste. It is also unpasteurized, adding bacteria to the list of the elements in your drink. Finally, the sake is not watered down, resulting in higher alcohol content as opposed to the standard 15%. With this being the case, why would anyone consider drinking a cocktail of bacteria, full of impurities, that delivers a stronger punch? First of all, it is safe to drink since modern storing methods keep it from becoming life-threatening. The freshness is also preserved as the sake is bottled right away after the mash is pressed to keep it from spoiling. Those two factors, along with the once-in-a-while craving for a stronger drink, have contributed to its rising popularity.

The Kubota Manju Muroka Nama Genshu, brewed in based in Nagaoka in Niigata Prefecture, is no exception. Boasting a golden color and alcohol content of 17%, it is not much different than other brands. What does set it apart, is the low levels of acidity that leave it smooth and easy-to-drink without losing any of its rich flavor. To raise the quality even further, the rice is polished to the maximum level possible and sourced from Niigata Prefecture, recognized for its superior quality rice.

The crucial month for sake sales is December when the shinshu – new sake – is released. Even if labeled “new,” though, the sake might have been sitting in containers for some time before being bottled and distributed. Those who know a thing or two about sake are looking for a different quality in their sake – that of being freshly squeezed. Kubota does exactly that – their sake is bottled right after being pressed out of the main mash. In fact, their product is still in the making at the time of release of this article.

Selling their sake outside the most important period is no accident either. The colder temperatures in January and February ensure that flavor and aroma-spoiling bacteria will not develop. Traditionally, sake used to be produced only during the winter months for this exact reason, but that requires intensive labor that many small breweries can no longer pull off due to staff shortages.

Set to be released on the February 18, 2020, the Kubota Manju Muroka Nama Genshu will hit the shelves in limited quantity, with a suggested retail price of ¥9,900. 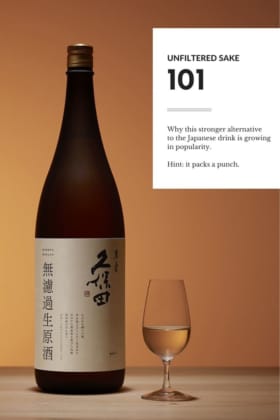