Despite Typhoon Hagibis’ quick approach, Arts Council Tokyo offered short refuge from the rain inside the Kita Noh Theatre. The event, held on the weekend of October 11, was supposed to take place in the Tokyo Metropolitan Teien Art Museum’s beautiful garden but was moved indoors due to unfortunate weather. Of course, the change in scenery doesn’t take away from this hypnotizing Noh performance.

For those new to this traditional theater art, Noh originated in Japan in the 14th century and uses a balanced mix of music, dance, expressive masks and costumes. Unlike Shakespeare’s Macbeth or Romeo & Juliet, where drama is at the heart of the play, Noh relies not on complicated plotlines, but rather on minute, carefully thought-out movements. Rounding up to about 200 titles, its repertoire consists of mostly stories inspired by Buddhist folklore and sutras. Though few, every actor spends decades developing a character, and thus makes it impossible to get a comprehensive understanding of every character on the first attendance.

Noh also has another particularity: Kyogen. Dividing the two acts of a Noh play, this comedic relief comes in to lighten up the mood and give the audience a breather. You’ll know you’ve entered the interlude as the actor speaks with a modern accent and moves quickly and precisely. 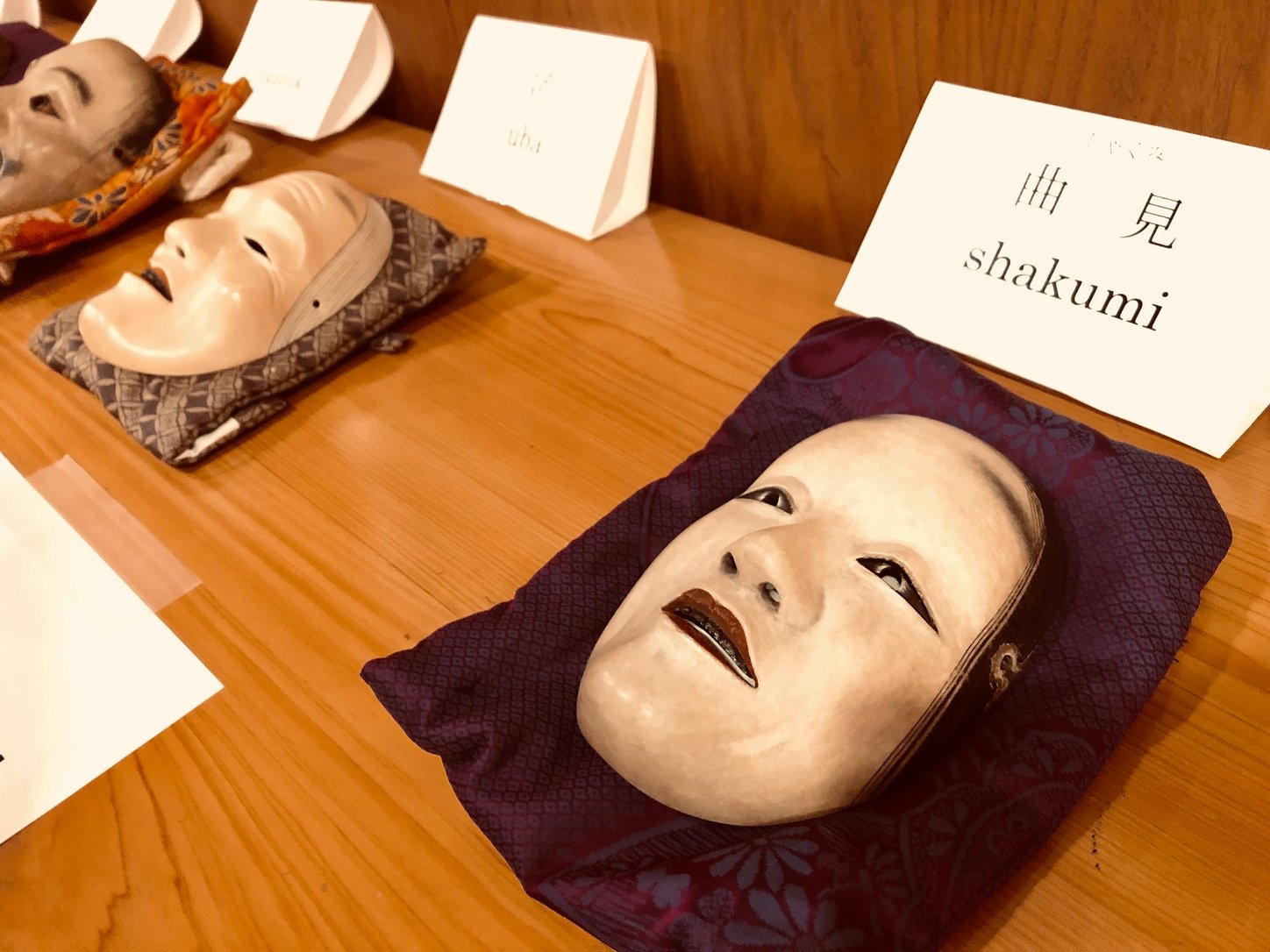 On the night of the performance, the organizers took great care to introduce Noh to foreign audience members. A modest workshop showcasing traditional masks, costumes and props used for this particular performance were open to the early birds, who were invited to try them on and learn more about the practical aspects of the art.

One could easily understand and appreciate the complexities of the unique mise-en-scène. The masks representing the few archetypes of the characters that appear throughout the Noh repertoire, from demonic women to pure monks, are heavy and the holes through which the actor can see the stage are the size of a peephole. Without any perception of depth of field or peripheral vision, it’s not hard to imagine how it could take years for performers to perfect their craft and develop precise gestures and mannerisms for every single one of their characters. Throughout their training, the Noh actors learn how to play most of them in a way that’s proper to themselves and fits one of the five schools of Noh.

The colorful garments that allow the audience to distinguish the protagonists and antagonists resemble those of 14th-century Japan. The fabrics are thick and a full kimono can reach up to 10 kilograms. Walking and wearing them for nearly 60 minutes is quite the workout. The Kyogen performance and interlude also serves for the necessary costume change of the protagonist. In this play, a frail elderly woman transformed into a flesh-eating monster, which not only meant changing the outfit, but the mask as well.

The stage is bare of any furniture or decor except for a painted pine tree. This singular hint of color in an otherwise wooden playground hints to simpler times when Noh was played in the fields.

Ahead of the performance, Professor Yamanaka and Associate Professor Schwemmer gave in-depth explanations in both Japanese and English about the story, as well as information about the characters and various cultural elements and motifs to pay attention to. When the performance started, the lines were projected onto a nearby screen in English, making it easy for foreign audience members to follow along. The translation was dynamic and really captured the tone of the story.

It was hard to believe 60 minutes had passed by. The slow pace of the play, which skips all the predicaments of your traditional British theatre, allows the audience members to fall in a meditative state and follow the actors in tandem with their slow movements. The set was minimalist, limited to only a couple of pieces of decor. Each piece, however, carried a special meaning and thus was necessary to understand which Buddhist legend was being performed.

The barren stage also allowed the actors to fill the space with their strong presence and movements, drawing the audience in to a truly intimate Japanese cultural experience.

Arts Council Tokyo develops a variety of programs to encourage the creation and dissemination of arts and culture, and to showcase the capital’s artistic and cultural attractions as a part of Tokyo Tokyo Festival to promote Tokyo from a cultural perspective ahead of the year 2020. Arts Council Tokyo Traditional Culture Programs offers events and festivals of Japanese traditional culture and performing arts for international audiences. Please check the website for what is coming up until the end of 2019 and upcoming in 2020.

To learn more about Noh and the rigorous training, earlier this month we chatted with Takehito Tomoeda, a professional actor who made an appearance in this special performance.