27 Things To Do in Tokyo This Weekend: November 1-4

As the spooky festivities come to an end and we say goodbye to another year of Halloween fun (did you see our best costume roundup?), let’s celebrate the first weekend of November with Christmas illuminations, the start of the winter festivals and other inspiring events happening all over Tokyo. Running throughout the year but especially breathtaking in the winter time is Odaiba’s Yakei Illumination. Using 40 trees over a course of 200 meters and 220,000 colorful lights, this illumination only adds to the beautiful skyline that features Tokyo Bay, Tokyo Tower, Tokyo Skytree and the Rainbow Bridge. Look forward to the full Christmas illuminations in this event, featuring a light and sound show, rainbow tunnel, 3D illuminations, and the ever-so-popular illumination excursion in an electric cart. This year’s theme is Dream World. As part of NTT East’s 20th anniversary celebration, this special exhibition consists of 47 remastered works of Japanese ukiyo-e master Hokusai certified by the Yamanashi Prefectural Museum Collection. In addition, 12 impressionist masterpieces (remastered by Musée d’Orsay) are also on display as a comparative exhibit. Visit Tokyo Dome City to enjoy their LaQua Christmas events from November 1 to December 25. Events include a Christmas market at LaQua Garden, inspired by the Nordic Hügge. In addition, there will be various stores and booths selling Christmas foods and goods. 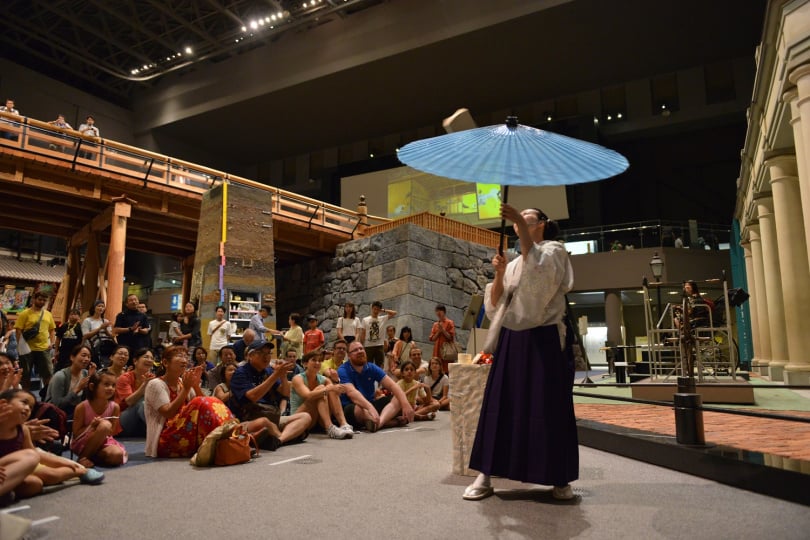 Every Saturday at the Edo-Tokyo Museum visitors can experience a variety of engei -traditional Japanese entertainment. Discover wazuma, traditional magic dating back more than 400 years, try your hand at kamikiri paper cutting and take home your creation or find yourself amazed by the skills of kyokugei (traditional acrobatics) including kasamawashi (umbrella juggling). As part of a small fall festival, visitors can enjoy a free shamisen performance in the beautiful garden scenery of Kyu Shiba Rikyu Gardens. In addition to modest attractions including a seasonal display, photo spot and souvenir stall, there will be two musical performance sessions held on Saturday by acclaimed shamisen players the Oyama Brothers. A German culture festival that offers all the beer, sausages and good times you would expect. Held annually since 2011, Deutschland Fest aims to showcase and share German culture and industry from cuisine and crafts to music and more. The open-air event has proven to be a hit among residents of all ages with its part beer garden, part Christmas market atmosphere. “Go” (which means “five” in Japanese) is the first exhibition of the 72 Steps project, a collab between two Russian-born, Tokyo-based artists: photographer Yulia Skogoreva and designer Olga Gerasim. This fashionable monthly event takes over the farmer’s market at United Nations University filling it to the brim with vintage clothes and city style. Raw Tokyo is held on the first weekend of every month featuring a selection of cool and unique traders selling vintage and recycled fashion, books, vinyl, artisan goods and more. What better way to spend the weekend than indulging in the combination of wine, food and music? One Love, Wine Love is semi-regular event held at various venues that brings together winemakers and people from various backgrounds to enjoy some of the finest things in life. For the second year in a row, Tokyo Station GranRoof will host the Tokyo Ekimachi Festival. With two stages and a massive line up of musicians and entertainers (including Sasaki Chika, pictured above), it’s set to kick off November on a high note. The 18th Dream Yosokoi Festival takes over the Odaiba area for three days of lively dancing and cheer with simultaneous offshoot events taking place in Akihabara, Marunouchi and at Tokyo Tower on Sunday. Yosakoi is a unique style of dancing combining traditional Japanese moves with modern music – think somewhere between awa-odori and cheerleading. Celebrate Mexico’s Day of the Dead at this Catrina costume contest and party in Omotesando. Dia de Muertos is a lively Mexican holiday in which people gather to pray for and remember friends and family members who have passed away, often dressing up as the iconic Catrina – an elegant skeleton. If you’re looking for a more action-packed illumination event, this one’s for you. Sure to leave you in a dreamy state is the Splash Swan performance, a water and lights (six million of them) show timed to music. Returning to Yebisu Garden Place for the 19th year, Baccarat Eternal Lights might just be the most spectacular of Tokyo’s winter illuminations. This year’s theme is “The shape of pleasure,” and the all-gold-everything illumination event features the much-anticipated huge chandelier made with 8,472 crystal pieces and 250 lights. Visit Tokyu Plaza Omotesando Harajuku 6th floor roof terrace to experience their OMOHARA illumination. Be surrounded by trees illuminated by approximately 16,000 LED lights. The dazzling display of beauty is perfect for friends or couples hoping to enjoy the festive season. RACKETT is an alt-pop artist from Sydney, Australia who has played in major theaters and festivals throughout Australia, receiving regular airplay on community radio as well as features in Rolling Stone Australia. An international art event presents a new generation of illuminations that create incredible night views across Yokohama. Now in its ninth year, Smart Illumination Yokohama is bigger and brighter than ever. The event promotes the importance of environmental technology by inviting artists to create installations, illuminations and workshops together with local companies, communities and citizens. Workshop: Create Your Own Wooden Instrument

Learn how to make your very own wooden instruments. Using only wooden boards and xylophones, you can replicate and bring the sounds of the forest back home with you. This annual event sees a re-enactment of the lavish processions of feudal lords who would travel to Edo during the reign of the Tokugawa clan. The regional lords were forced to spend alternate years residing in Edo (now Tokyo) and spent large amounts of money on spectacular parades featuring music and entertainers as they made their arrival. Serious collectors, casual shoppers and appreciators of vintage treasures can all enjoy this large outdoor antique market. Traders come from far and wide to set up their stalls selling everything from old kimonos, toys and ephemera to coins, ceramics, jewelry and furniture. This quirky flea market returns for the autumn and winter season offering a mix of second hand goods, crafts and collectibles to promote and facilitate recycling culture. Despite the name, not only kawaii items are sold here. Enjoy the sights, sounds and tastes of the South East Asian destination as the Malaysia Fair returns to Mizu no Hiroba at Shinjuku Central Park for its second year in Tokyo. A relative newcomer to long list of popular world culture festivals held in the city each year. Nihon Buyo is a traditional Japanese dance form that dates back almost 400 years. It uses movements from both dance and pantomime to create an elegant form of storytelling. Join this workshop to learn how to dance, as well as get some tips on how to wear yukata, too. Kichijoji Parco resumes its rooftop flea market for the autumn season. Space is limited but the event can squeeze in up to 100 sellers offering household items, clothes and handmade goods. Japanese alternative band Ogre You Asshole will tour Japan in support of its eighth album, “New Kind of Man,” released on September 4 and featuring a mix of music genres including synth-pop, Latin funk, French disco and electro dance music, successfully creating the mood of “half real, half inane.”