Right, so you’ve picked out the fireworks and music festivals you’re going to this summer. Next, here are some of the most interesting traditional Japanese matsuri happening in the city this season. Before you go, read up on “Awa-Odori: The Story Behind Japan’s Biggest Dance Festival.” (And for even more things to do this summer, head to our events calendar.) Also known as the Star Festival, this traditional event is a celebration of the legend that tells of two stars, Vega and Altair, who were separated lovers only allowed to meet once a year in the Milky Way. It’s one for the romantics, for sure, but it also impresses with unbelievably big and colorful decorations that take over the streets. Although you can find the bamboo wish trees at most local shrines and temples, the best way to soak in the festival vibes is to head out to Asakusa’s Kappabashi, where countless vendors and stalls are awaiting you with trinkets and fried foods.

July 3-8, around Kappabashi between Ueno and Asakusa. More info here. As part of Japan’s summer obon celebrations, the festivities at Yasukuni Shrine are some of the biggest and brightest in the country. Each evening 30,000 lanterns light the way to the shrine and over 300,000 visitors flocking to see the spectacular sight. You will need to brave the crowds, but the matsuri atmosphere and the photogenic views are well worth it. Kagurazaka is widely known as being an old geisha town, and its annual matsuri is a blend of Japanese Buddhist culture and modern surroundings that allows participants to enjoy mouthwatering gourmet food together with traditional events. Expect a relaxed summer evening with traditional dancing, activities for children and plenty of market stalls. This Okinawan summer festival takes place in the streets and on various stages near Shinjuku Station, in the heart of Tokyo. Originally part of a ritual performed at the end of the old bon season, dancers and drummers fill the streets with music and cheer as they honor the spirits of their ancestors and wish for good fortune. Though this event originates in rural Okinawa, it has become a city summer staple in the capital. 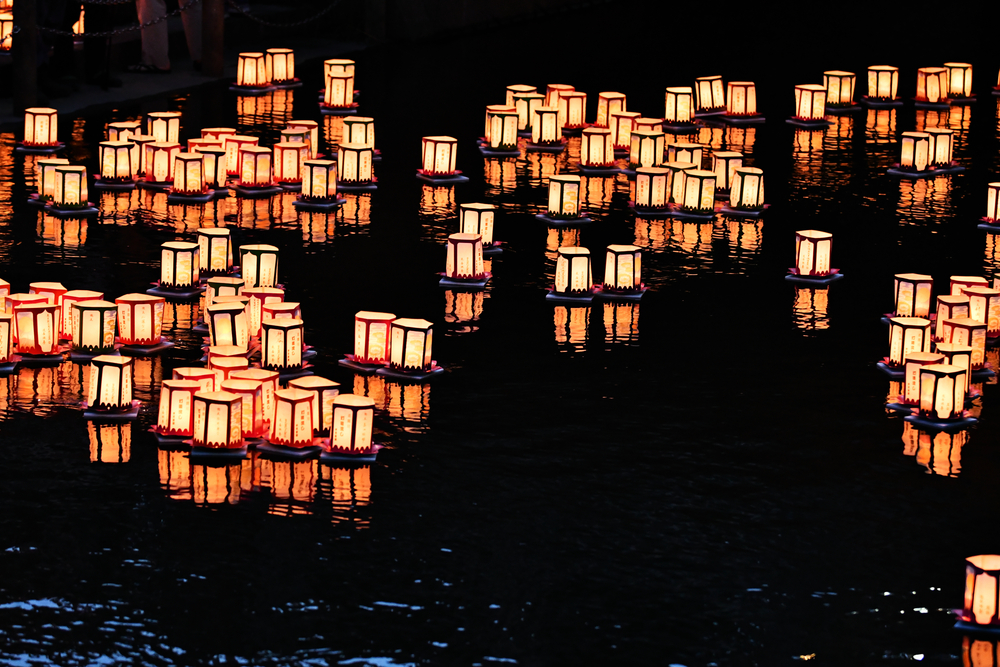 One of Japan’s summer symbols is the soothing beauty of softly glowing paper lanterns floating along the Sumida River at dusk. Participants decorate their lanterns, then send them off as they make a wish. Lanterns are available to buy at the venue the day of, but expect long lines. For those who would like to purchase their own lantern in advance, you can contact the Asakusa Tourist Federation. While Shimokitazawa’s awaodori festival may not be as big as Koenji’s, it’s no less exciting or fun! Watch dancers and taiko drummers rhythmically glide through the narrow streets as they wind past stalls offering snacks and beer. Or, if you’re feeling adventurous, why not join in the fun? The main shopping street, Shimokitazawa Ichibangai, has an awaodori dance group specifically for foreign residents and tourists who want to give it a try. Koenji Awaodori is one of Tokyo’s major summer festivals, with over 10,000 Awa dancers — from 188 groups, known as ren — and just over a million visitors in the area to watch them parade down the streets. This traditional Japanese summer festival blends perfectly with its neighborhood’s cool and stylish atmosphere and is well-known for its delicious edible offerings. Azabu-Juban’s summer festival is known as Noryo Matsuri. “Noryo” can be roughly translated as “a cool summer night,” which is probably not the case in the peak of August heat, but at least there will be plenty of refreshments and shaved ice on hand! The trendy area’s bustling shopping street is closed off to vehicles during the event as local businesses set up stalls along the streets, offering typical matsuri goods and games in addition to mountains of food. There is also a stage area for live performances and a children’s plaza.

Although only started in 2001, Harajuku Omotesando Super Yosakoi Festival has become one of Tokyo’s most spectacular dance festivals, in which more than 80,000 people gather to watch as 106 regional teams parade, perform and compete around the streets and stages of Omotesando and Harajuku. This festival is a modern version of traditional Japanese dances such as the famous Awa Odori, and was first invented in the city of Kochi in 1954. Since then, the Yosakoi Festival has rapidly gained popularity and grown into one of the country’s most spectacular festivals, in which teams wear original costumes influenced by their local culture and inspired by modern trends. Around 45 teams will compete in the annual Oedo Soran Festival. Yosakoi is a unique style of dancing combining traditional Japanese moves with modern music – think somewhere between awa-odori and cheerleading. Large teams perform their choreographed routines in colorful historically inspired costumes, punctuating the dancing with energetic shouts, flag waving and hand percussion. Oedo Soran Festival prides itself on being accessible to all, welcoming teams and visitors of all ages and abilities, from the local community and across Japan. Expect lively performances, catchy tunes and plenty of loud Japanese spirit!