Gesshin Claire Greenwood is probably not what you expect to fit the image of a monk in Japan. She’s female, American and was only 24 years old when she was ordained as a Zen priest in 2010. During the five years she spent in Japan practicing Zen Buddhism – with much of that time living in an all-female monastery – she started a blog entitled That’s So Zen to share and document her journey. Then in May 2018, she released her first book, Bow First, Ask Questions Later.

The book retells the unique, fascinating and deeply personal experiences of her spiritual adventure, tackling Buddhist training, sex, love, depression, discrimination and so much more along the way. Her unfiltered and humorous writing is at times rebellious. But rather than being sensationalist, the outspoken honesty and progressive interpretations of Buddhism from a young Western female perspective are perhaps exactly what modern seekers of enlightenment need to hear.

Now living back in the US, the author, teacher and Zen practitioner took the time to answer some questions about her fascinating story, and give us her thoughts on food, feminism and monastic life.

How were you first introduced to Buddhism and Zen?

My parents are Vipassana practitioners, so that was what I started with, but I became interested in Buddhism in college. During my sophomore year of college I basically read every single book written about Buddhism, and spent all of my free time on meditation retreats. To be honest, I wasn’t interested in Zen until I came to Japan.

Where did you live and study in Japan?

I practiced at Toshoji in Okayama and Aichi Nisodo in Nagoya. I was a somewhat experienced meditator but I had never visited Japan before, or studied Japanese! I wasn’t planning on staying when I first came; I thought I would just check out a monastery for a few months and be on my way. I really wanted to practice deeply and was quite passionate. I ended up staying six months, then going home and returning a little bit later and staying for about five years.

What are your thoughts on Japanese culture and living in Japan in general?

I will always have a deep love for Japanese food. In the monastery, I worked mostly in the kitchen, where I learned vegan Japanese cooking, and I always enjoyed going out to eat whenever I could. I’m currently writing a cookbook on vegan Buddhist temple food. My time in the monastery made me who I am today, but I think I never really adjusted to how little space there is in Japan to be counter-culture, rebellious, or just plain odd. I am a very weird person. Coming back to the United States was somewhat a relief – like, “Ah! I can be myself!”, but that doesn’t mean I don’t get a wave of nostalgia whenever I see a photo or video of Japan.

Why did you start writing a blog whilst training in Japan?

I had left the monastery and was living in Kyoto. I was destitute, still living as a nun, and needed a way to make money. A friend suggested I start a blog to reconnect with my family, who I’d had a falling out with (they didn’t like me living in Japan). What started out as a travel blog blossomed into a pretty big platform – it got me a book, and a husband (he was the fanboy who was the first to comment on all my posts)! I’ve also met dear friends through the blog. Writing has always been a way for me to connect; I feel like I can’t really express myself out loud most of the time. My true self comes forward in my writing.

Have you received any feedback from Japan about your book?

I have not! I am a little scared to hear feedback. I’m pretty critical of Japanese culture at times, and talk openly about being bullied in the convent (bullying is pretty common in Japanese monasteries, as it is in schools and other institutions). My advisor in grad school, who was born and raised in Japan, read it and liked it, so here’s hoping.

Do you think it is important to create all-female environments within Buddhism? And as a young woman and a feminist, do you think women are under-represented?

Yes, I think female environments are very important. I wish we had more female training spaces in the West. I think things are changing, but we have a lot of work to do. There is rampant sexual abuse in Buddhist communities. I think Buddhism needs to take up feminism and sex positivity (yes I said it!) as core ethical tenets, otherwise it will continue to have warped ideas about consent.

Religion tends to repress sexuality and, as we’ve seen in Catholicism in the West, when combined with patriarchal institutions this can lead to widespread abuse. What I’ve seen of Buddhism in America is that it wants to change and adapt in a radical way to meet the needs of everyday people. This is a good sign, but there will always be some pushback from more traditionalists. I know because I used to be one!

What are some of the biggest misconceptions about Buddhist monks and monastic lifestyles?

People often assume Buddhist monks and nuns are vegetarians. I remember one time I was in a train station in Nagoya in my nun’s clothes and I was so excited to be out of the monastery and eat meat. I went up to a food stall and the women started gushing about Buddha and how happy she was to see a young nun like me. She pointed out her vegetarian bento box, which was called something like “Zen Monk Bento.” I didn’t want to disappoint her so I bought the vegetarian bento… even though I really wanted the meat option. Generally, people think clergy are perfect, but we are not. Actually, clergy are often more screwed up than laity! That’s why we became clergy to begin with … we needed to figure some things out for ourselves.

What are your future plans?

I’m writing my second book now. It’s called Just Enough: Recipes from Japan’s Buddhist Temples. And I’m studying to be a marriage and family therapist. I would like to work with clients – young women in particular – and help them navigate life’s challenges in a way that is both spiritual and psychological. I always want to keep writing, learning, and asking questions about reality.

Is there any particular Buddhist teaching that you think is beneficial for everyone?

There is a saying in Buddhism that enlightenment is like a bird, and it has two wings: one is wisdom and one is compassion. You need both to fly. I think easy distillations of this are practices of concentration and loving-kindness. Concentration can be attained by counting the breath, for example, and loving- kindness arises by generating unconditional good wishes for ourselves and others. Throughout our day, we can easily practice counting the breath or simply being kind to ourselves, not beating ourselves up if we make a mistake at work or get in an argument with someone. We can practice being kind to our partners, family and co-workers. We can practice breathing and smiling. To me,that really is the essence of Buddhist practice and something everyone can benefit from. 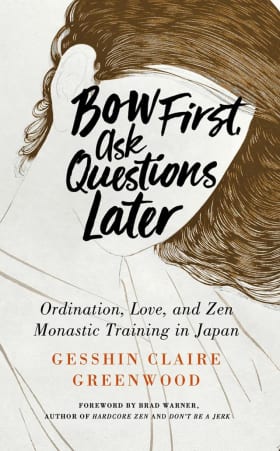 For more information about Gesshin Claire Greenwood and to read more of her writing, go to thatssozen.blogspot.com and gesshin.net