“Amane recounted how Daisuke, the class captain, and Yuki, his sidekick, addressed their class teacher, a man named Takashi Sasaki. ‘Sir, let’s go up the hill. We should climb the hill, sir. If we stay here, the ground might split open and swallow us up. We’ll die if we stay here!’

The teacher shushed them, and told them to remain where they were.
Soon afterwards Amane’s mother arrived and hurriedly drove her away. The family lost their house, but she was one of only five children left alive from the sixth-year class.” (Page 46, Ghosts of the Tsunami)

Seven years ago, this month, 74 out of 108 students from Okawa Primary School along with 10 teachers were killed by the monster waves that powered their way across the Tohoku region. Four pupils and one teacher managed to escape; the others were either off that day or, like Amane, had been picked up earlier by a parent. The plight of those that remained is arguably the most harrowing story of the Great East Japan Earthquake and Tsunami of 2011. It was a disaster that destroyed towns and killed around 18,500 people, yet just 75 children perished while at school. All but one of those attended Okawa.

Could this tragedy have been avoided? And if so, who was to blame? These are two of the central questions in Ghosts of the Tsunami, a heartbreaking and at the same time gripping book by the highly respected and award-winning foreign correspondent Richard Lloyd Parry, who moved to Japan in 1995.

“I spent lots of time in Tohoku working as a journalist, and didn’t commit to the book until two years after the disaster,” Parry tells Weekender. “I always thought I’d do something similar about the 2004 Indian Ocean Tsunami; however, I couldn’t find a way in and not living in the area made it harder. With this one being so close, it felt more personal. Rather than something sociological, I wanted to tell it through stories. Okawa immediately stood out, not just because it was so gut-wrenchingly sad, but also due it being an anomaly. No other school suffered the same fate.”

On the day of the disaster, many parents in the village of Kamaya, Ishinomaki City waited for their children to return without being overly concerned. The school was thought to be safe as teachers were well trained in emergency drills and the building was in front of a 700-foot hill. Between the first tremor and the tsunami reaching Okawa, there were around 50 minutes for them to climb to safety, and a van with a loudspeaker had warned of what was to come. Yet the teachers decided to stay put. The school’s emergency response manual was vague when it came to situations involving a tsunami, and panic set in. They eventually attempted to escape to a traffic island six meters higher up. Tragically this led them directly towards the mouth of the tsunami.

“It’s not a straightforward story about heroes and villains,” says Parry. “Kamaya is a river village with a huge distance between the school and the sea. Teachers and locals didn’t believe they were in immediate danger. They were wrong and were warned, but it was a unique situation. The hydrology of the river was such that it became like a lens concentrating the power of the tsunami.”

Many parents believed the school had been negligent, though what made their suffering worse was the lack of accountability. A day before the third anniversary of the tsunami, it was announced that families of 23 children would be suing Ishinomaki City and Miyagi Prefecture, demanding compensation of ¥100 million for each of the lives lost. “It could have all been different if someone early on had had the courage to fall on one knee and say sorry rather than giving fussy, bloodless bureaucratic answers to questions,” argues Parry. “It was a failure of imagination, but what more could you expect from small-town civil servants? They were victims too, and in some ways did a good job of helping the city pull through. For the families, though, it wasn’t about the money or gathering facts. They wanted the emotional truth.”

When interviewing these families, Parry knew it was important to be empathetic while also keeping a sense of detachment. The two mothers he came to know best were Naomi Hiratsuka, who got an excavator license so she could search for her missing daughter Koharu, and Sayomi Shito, who resorted to licking mud from the eyes of the corpse of her baby girl Chisato as there were no towels she could use. According to Parry, the pair were nodding acquaintances until the tsunami – then a mutual resentment began to grow.

“Grief is a destructive emotion,” says Parry. “People take comfort in hearing about silver linings, and whilst it’s true that loss can strengthen bonds with loved ones and bring strangers together, overall the balance is negative. I saw this on a smaller scale while writing my previous book about the murder of Lucie Blackman in Tokyo, a case that caused a huge family rift. In Tohoku, you had communities dealing with a similar tragedy at the same time so it’s no surprise there was friction.”

Parry believes the varying degrees of bereavement added to the tension. “It would be blasphemous to suggest that someone who lost one child was fortunate, but in an unimaginable way, that’s how those who lost all their children felt. The activists’ campaign against the local authorities was also divisive. They wanted answers, especially from the one surviving teacher, whereas some people, including Naomi, felt it was counter-productive to argue with bureaucrats.”

“Could this tragedy have been avoided? And if so, who was to blame?”

Deciding what to do with the school building was another contentious issue. Many wanted the place torn down. Others, including Tetsuya Tadano, one of the four students who managed to escape the tsunami when it hit the school, campaigned to preserve it.

“Both viewpoints are completely understandable,” says Parry. “How can you argue with parents who say it’s a reminder of a horror they want to forget? At the same time, is there any greater authority on the subject than Tetsuya? The building means so much to him.”

While Okawa is the focus of the book, Ghosts of the Tsunami is about more than a tragic school. We learn about the resilience and decency of the victims and how Parry and fellow foreign journalists had to fend off gifts of food from homeless refugees who then apologized for the inadequacy of their hospitality. There was no looting, squabbling or self-pity. They instinctively persevered, expecting little in the way of support from the government.

“Gaman – meaning endurance in Japanese – is a useful thing in the immediate aftermath of a natural disaster,” opines Parry. “At the same time, those same qualities of acceptance and passivity are detrimental when dealing with a corrupt political and nuclear establishment. Whatever you say about nuclear power, and it’s not a black and white issue, there should be a more vigorous debate in Japan. If similar cock-ups had been made in America or Europe, millions of people would have been protesting on the streets for months. The biggest demo I attended here was about 100,000 people. After that things tailed off, which didn’t surprise me.”

What did shock Parry was the depth and unselfconscious power of Japanese people’s spiritual belief in their ancestors. He’d seen Buddhist altars (Butsudan) and memorial tablets (ihai) at various homes before but assumed they were more symbolic than anything else. His viewpoint changed after being in Tohoku. “It was taken for granted that their ancestors were present,” he says. “They spoke to them through the Butsudan like they were talking over the phone. According to polls, Japan is one of the least religious countries in the world, but in many ways the opposite is true. It’s a spiritual nation.”

After the tsunami, Reverend Taio Kaneta was overwhelmed with requests for exorcisms, a taxi driver in Sendai picked up a passenger that disappeared halfway through the journey, and dead neighbors turned up in the living rooms of houses. These otherworldly elements of Parry’s narrative serve to temper what is an unflinching, beautifully written and at times painful account of the most destructive natural disaster in Japan’s postwar history. 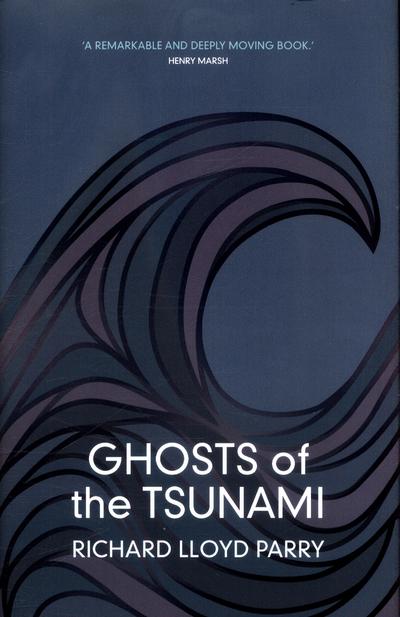 Ghosts of the Tsunami is available on Amazon.co.jp for about ¥2,000.