People love cats for their grace, their beauty, and their playfulness. It’s this last quality that photographer Hiroyuki Hisakata has made the most of with the pictures he shares on social media and in two photo books.

Hisakata, who hails from Kyushu, has only been taking pictures professionally for about three years, and it was only a year and a half ago that he started shooting action pictures of cats.

As he explains, he first thought that using cat toys wouldn’t work with outdoor cats: “I thought that cats living outside wouldn’t play with cat toys, but one time I happened to use a cat toy, and I could shoot this one cat in a mighty kung fu pose.” That particular shot was remarkably successful on social media, and Hisakata realized that he was on to something. Since then, he’s been traveling to islands, parks, and towns to find the cats that he shoots.

There are several places that he returns to time and time again, and as he explains, he’s gotten to know quite a few of his subjects – and their moves – quite well: “I often shoot the same cat. They have interesting personalities. There are cats that dance, and are good at twisting, cats that pose like powerful heroes from Hollywood films, cats like martial artists and cats like ninjas. Nobody would have known that they had these unique personalities!” But Hiroyuki Hisakata’s constantly on the lookout for new talent, and he admits to being a little torn between shooting the cats he knows and finding new ones: “If I go to the same place I can get to know the cats better, but If I go to a new place I might meet cats that can make wonderful moves.”

He shoots on his own, holding the cat toy – anything from toy rats to a butterflies –
in one hand and the camera in the other, using a fast shutter speed to catch the cats in action. He’s careful not to tire the cats out, limits the time of his photo sessions, and often switches the toys out to ensure good hygiene for the playful felines. He occasionally uses Photoshop to remove the cat toy from the shots, but usually manages to achieve his results by pulling the cat toy away at just the right moment. 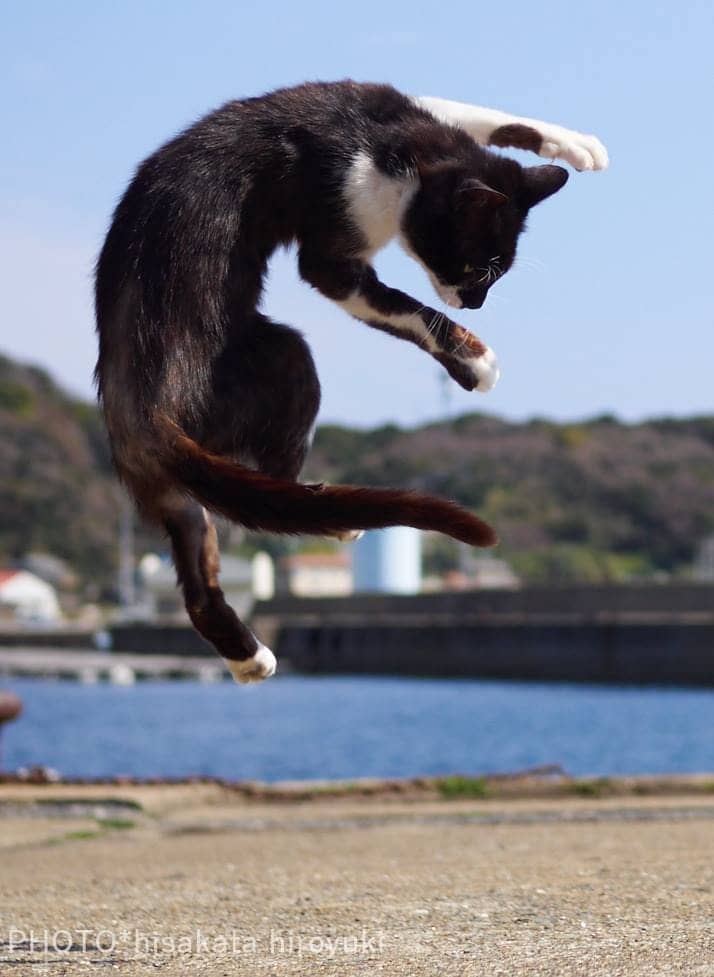 Even though he’s achieved a measure of internet acclaim through his work, he thinks the cats probably enjoy it too, which is one of the reasons he keeps at it: “I think that more cats want to play with humans, and so I keep on shooting cats in action.” All photos courtesy of Hiroyuki Hisakata.