A Weak Yen Helps Manufacturing – But Where Is It Headed from Here?

The Japanese yen has been on a decline since last year, and though that might mean that Japanese tourists may not have so much buying power when they’re overseas, there are good sides to the situation too – in fact, they may even help Prime Minister Abe in Japan’s upcoming general elections.

According to the most recent Tankan survey (or Short-Term Economic Survey of Enterprises in Japan) done by the Bank of Japan, manufacturing in Japan has reached a 10-year high. In fact, the country’s big manufacturers are also feeling more confident thanks to a weak yen and strong global demand. This news could help Abe in the upcoming general elections by showing voters that his “Abenomics” stimulus policies are having an effect.

When did this trend begin? The value of the Japanese yen first started dropping sharply in comparison to the euro and the US dollar back in November 2016. Now, a weaker yen might not be popular with the Japanese general public because it means that they might not have quite as much money to spend if they’re traveling overseas or buying things from abroad. But for big Japanese manufacturers, hearing news about a weak yen is like sweet music to the ears: it means that their exports are cheaper and more competitive on the world market.

Which Way Is the Yen Going?

The yen is no different from any other currency: its value goes up and down over time depending on what’s happening in Japan and around the world. But you don’t need to be the CEO of a major company to be concerned about how the value of the yen might change: having a basic sense of current price trends with the yen isn’t just helpful for manufacturers, it’s useful for people looking to plan ahead for a trip abroad or even try their hand at forex trading – the practice of predicting the change in exchange rates between two currencies.

Among the many things that the election of Donald Trump as US president did, it also sent the yen on a sharp downturn against the dollar. After Trump’s election in November 2016, the dollar shot up more than 12 percent against the yen in just 36 days!

Since then, and for most of 2017, the price of the dollar paired with the yen (USD/JPY) has stayed in a range, not going up or down any more than 6 percent. As far as where the yen could be headed in the future, it’s important to pay attention to the price action – or the movement – of the USD/JPY currency pair. If the price moves out of its current range, that could be very telling of what lies ahead.

If you look at the chart below, you can easily see the current range of the dollar/yen pair. If the price moves higher out of the range then this means that the yen will probably get weaker. On the other hand, if the price moves lower out of the range, then a stronger yen is in the cards. The reason behind a move either way might be found in the news or in other economic factors, but by simply observing this price behavior you can get a good idea of where things are going. 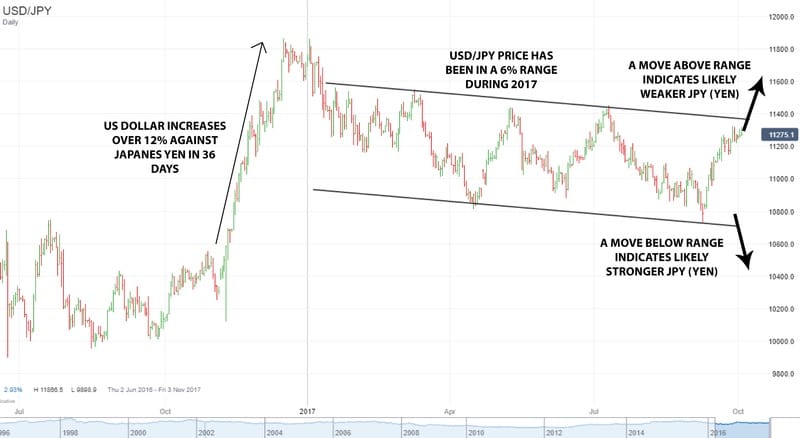 There are good and bad sides to having a stronger or weaker yen, and predicting which way it’s going to go with 100 percent accuracy is impossible. But the strong business mood and confidence amongst manufacturers in Japan is good for jobs and the economy. Given Japan’s rapidly aging population and labor shortages, these positive business factors could mean wage growth as businesses compete to get the staff they need. Wage increases might balance out against a weaker yen, and be the perfect thing for Japanese citizens, while helping businesses remain competitive at the same time. Sounds like a win-win to us.