Air Bonsai: Your Own “Little Star”

The most recent artful creation to make waves out of Japan is a floating bonsai plant, adorably referred to by its creators as a “little star.”

The Honshinchu Air Bonsai Garden is a start-up based in Kyushu and the company recently launched a crowd-funded Kickstarter campaign, aiming to raise $80,000 to help create a foundation for their business. As of January 29, they had well exceeded their goal, accumulating $465,000 (from just over 2,000 pledgers) and still an entire month to go. Their rewards for contributing aren’t bad either, with the largest package including travel expenses and a tour of their center to learn how they crafted the magical levitating plants.

This floating ball of foliage starts with a globe of moss. Grown on a small sponge of soil, with a magnetic device inside, it is lightly watered and gently cared for over a period of time before it’s ready to support a plant of your choice. The bottom half of the “energy base,” as they refer to it, contains the other magnetic source that results in keeping the plant airborne. 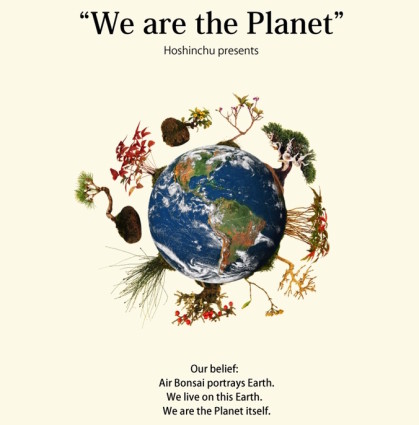 The Hoshinchu Team has a variety of base designs, all hand-made ceramic pieces from their workshop. Each piece sits atop a hand-crafted cushion, in “traditional Japanese vintage fabrics.” Some of the clay and lava material for the bases even comes from Kyushu’s famed Sakurajima volcano. Each of the carvings and paintings are unique to one another, so supply is limited at the moment – hence the necessity for crowd-funding. Their inspiration, as described in detail on their Kickstarter page, comes from the stars. The team shares a love of stargazing and aspires to protect the planet and they’re creating these “small worlds” to share with the world in hopes of networking a “galaxy of [new] little stars.”

At the moment, the team is growing and curating thousands of “little star” moss balls and energy bases, to prepare them for global shipment in August. Experience a tea ceremony while wearing kimono at Bonsai Museum