If a look back at the events of the previous year teach us anything, it’s that you can always count on Tokyo to keep us guessing—and give us something to discuss. From architectural ups and downs and debates of war to rough-housing dignitaries and movie monster ambassadors, here are some of the stories that shaped 2015. Kenji Goto and Haruna Yukawa—one man an independent journalist and the other a would-be “mercenary”—are killed by the terrorists of ISIS, after being held hostage for several months. Prior to their murders, a ransom video, which showed the two men in orange jumpsuits kneeling on either side of the London-born terrorist known as “Jihadi John,” grips the world. Kiyoshi Kimura, the owner of the Sushi-Zanmai chain of sushi restaurants, keeps his four-year streak of winning the first auction of the year at Tsukiji market going with a ¥4.51 million ($37,500) bid on a bluefin tuna. 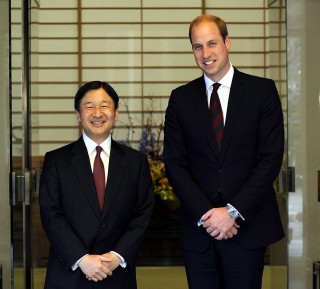 The Ethiopian runners Endesha Negesse and Berhane Dibaba win the Men and Women’s sections of the 2015 Tokyo Marathon. Security was significantly stepped up for the race in the wake of the ISIS murders: anti-terror police run alongside competitors on the cold, rainy day. The UK’s Prince William makes a four-day trip to Japan; it is the first visit of a British royal to the country since 2008. The novelist, and some-time advisor to Prime Minister Abe, Ayako Sono writes an opinion piece in which she supports allowing more immigrants in Japan, but suggest that those immigrants live separately from Japanese people. Michelle Obama arrives in Japan wearing a dress by the Japanese designer Kenzo. Meanwhile, Angela Merkel urges Japan to come to grips with its wartime past. Tokyo marks the 20th anniversary of the Aum Shinrikyo gas attacks on the Tokyo subway lines. Shibuya Ward becomes the first location in Japan to recognize same-sex partnerships. Service between Tokyo and Kanazawa begins on the Hokuriku Shinkansen Line. Ariana Miyamoto, a Japanese national whose mother is Japanese and whose father is African American, is selected as Miss Universe Japan. A statue reuniting the faithful Hachiko and his master Hidesaburo Ueno is unveiled. A Japanese man is arrested for using a drone to carry radioactive sand to the top of Prime Minister Abe’s office, in protest of Abe’s nuclear energy policy. Next month, laws go into place limiting the use of drones in public parks and near governmental buildings. Godzilla is recruited as the tourism ambassador for the ward of Shinjuku, and his giant likeness was erected to loom over the Hotel Gracery Shinjuku. The final Rugby Sevens World Series matches are held in Tokyo. Taco Bell makes a popular return to Tokyo after 20 years.

Demolition of Tokyo’s old Olympic Stadium, the centerpiece of the 1964 Olympics, is completed. A pair of Japanese melons from Sapporo sell for $12,400. Butter shortages increase as the government weighs the idea of carrying foreign imports. Japanese ad giant Dentsu announces that, for the first time in its 114-year history, it has generated more profit outside of Japan than inside. Notwithstanding the continuing stories about Japan’s supremely low birth rates, Germany manages to take the inauspicious crown, with a tally of 8.2 children per 1,000 people, compared with 8.4 per 1,000 from Japan, according to BDO and the Hamburg Institute of International Economics.

Haruo Hayashizaki, a 71-year-old pensioner, sets himself on fire on a southbound Shinkansen. He kills himself, 52-year-old Yoshiko Kuwahara, and wounds 26. He had complained to a neighbor about the difficulties of living on what he called a meager pension. The Managing Officer and Chief Communications Officer of Toyota, American Julie Hamp, is arrested for having Oxycodone mailed to her without a prescription. She had been appointed in April. Volcanic eruptions in Hakone close some areas of the popular vacation spot near Tokyo. An old law that made it illegal to dance in clubs after midnight is officially taken off the books. After months of criticism, budget cuts, and rising building costs, architect Zaha Hadid’s design for the 2020 Tokyo Olympic Stadium is taken off the drawing board. Following suit with Shibuya Ward, Tokyo’s Setagaya Ward announces that it will begin issuing certificates that recognize the marriage of same-sex couples. Amid strong protests (a rarity for Tokyo), the Lower House of Parliament approves a controversial set of bills that would expand the capability of the Japanese military. After a gutsy performance that got them into the Finals of the FIFA Women’s World Cup, Nadeshiko go down 5–2 against the US Women’s team. It’s the final game for superstar Homare Sawa, who has more caps than any other player for Japan. Marking the end of 53 years in business, during which it played host to world leaders and even found its way into a James Bond novel, the Hotel Okura Tokyo closes its doors. A new 41-story Okura Tokyo will be rebuilt in 2019. The Yamaguchi-gumi, Japan’s largest organized crime syndicate, fractures into several different gangs. Protests against the security bills continue to rage while the country recognizes the 70th anniversary of the end of World War II. In the “good luck with that” department, a group of railway companies, the operators of Haneda and Narita airports, and the Japan Elevator Association declare an unofficial rule that all escalator riders should simply stand, hold onto the handrails, and not try to pass or the right—or the left.

Deluges from heavy rains lead to flooding throughout Japan, with the worst in Tochigi and Ibaraki Prefectures. Parts of the Ibaraki city of Joso is flooded after the bordering Kinu River washes over its banks. The new logo for the 2020 Tokyo Olympics, first unveiled in July, is scrapped following plagiarism complaints, and an eventual lawsuit, due to its similarity to the mark used by Belgium’s Théâtre de Liège. PR firm Sunny Side Up purchases Bulbous Cell Media Group, the publisher of Tokyo Weekender. Massive protests continue against the controversial security bills as they are debated in the Upper House of Parliament; they are finally passed on September 19. London mayor Boris Johnson catches a fair amount of flak for bowling over a 10-year-old boy during a casual rugby match. Organizers of the Tokyo Olympics announce an open competition for the design of the new Olympics logo. In a questionable bid to appeal to foreign tourists, the district of Ebisu promotes a food festival centered on whale meat. In a news conference, UN envoy Maud de Boer-Buquicchio makes the controversial statement that 13 percent of all schoolgirls in Japan engage in enjo kosai (“compensated dating,” a practice that can range from casual conversation to paid sex). The following month, de Boer-Buquicchio retracts her statement under pressure from Japanese government officials and complaints that her figure could not be corroborated with any “official” reports. After years of private deliberations, the Trans-Pacific Partnership is passed.

A small bomb is detonated in a bathroom at the controversial Yasukuni Shrine. No injuries were caused, and a South Korean suspect is arrested the following month. In the first tranche of what might be one of the largest IPOs in the world, the first shares of Japan Post Holdings and its two financial units go onto the market. The privatization of the institution was a major political coup pushed forward by former Prime Minister Koizumi. An artificial intelligence called the Todai Robot Project passes a standardized university exam with higher than average marks. It scores 10 percent higher than human examinees on a test that included questions in math, physics, English, and history.

The Tokyo 2020 Organizing Committee selects a new design for the Olympic stadium. Created by architect Kengo Kuma, the environmentally friendly concept is already raising some hackles for its similarity to Zaha Hadid’s design. Somewhat slow on the heels of the drone scare in April, Tokyo police announce the launch of a drone squad: its unmanned aerial vehicles are tasked with taking down nuisance drones and equipped with nets. The restaurant Tsuta becomes the first ramen establishment to earn a star in the Michelin Guide.