The student sibling of the country’s largest art and design show is already making the grade in its second year.

For creative souls of all sorts, Design Festa has become a household name over the course of more than 20 years. It’s a place where artists, designers, musicians, performers of all stripes – and those who appreciate them – come together for a weekend that fills Tokyo Big Sight to capacity. In fact, even though the event is known for its spirit of inclusivity, Design Festa can seem a little intimidating to newbies. What’s more, due to the event’s immense popularity, it’s even beginning to stretch the seams of the biggest convention hall that Tokyo has to offer.

That’s one of the reasons that GAKUTEN was born. The show is organized by the same people who mastermind the twice-yearly Design Festa; however, this art party celebrates the work of students — a direct translation of the word GAKUTEN is “student exhibition.” But, as Overseas PR Coordinator for Design Festa, Sarah Feinerman, explains, the definition of what a “student” is can be quite loose (in keeping with the event’s free spirit). Walking the floor of the hall in Big Sight where the event was taking place, you could see everyone from elementary school kids to retirees: the only requirement is for exhibitors to be studying something, whether they’re doing it in formal classes or on their own. The participants don’t even need to be taking classes in what they’re exhibiting.

Feinerman points out that the majority of exhibitors at GAKUTEN are of university age, and the show focuses on giving them the chance to network, to inspire each other, and in some cases, even find jobs after they have graduated. The show celebrated its second anniversary in August, and it proved its ability to draw crowds of both attendees and exhibitors alike: the number of applicants has already increased since its debut year.

Walking around the booths in the hall, you could find individual artists displaying their creations, as well as groups of students from various art and technical schools in Japan. Making an appearance around the hall were unique guitars, creations made entirely from plastic drinking straws, and a pro bono art and PR supporter. Here is some of the art – and some of the artists – who caught our eyes: A university student, SONO’s chosen medium is kirie, or pictures made from cut paper. He explains that he was inspired to take up the art form about four years ago, while watching a TV show about the form. It takes him about 10 hours to finish a piece, and the motto he has developed since beginning is, “Once you are interested in doing something, just do it!” He is not an artist himself; rather, this hospital employee works to support and provide more publicity for artists. As he explains, “There are so amazing artists who create great work, but they are not known. This is my way of helping these unsung creative people do their very best.” Through his digital alter ego, Holley’s, he shares information about up and coming artists on Facebook, Instagram, LINE, and more. We caught up with him at GAKUTEN sporting this Instagram frame. He would drop in on artists, take their pictures using the frame, and tag them as a way to generate some buzz for these budding artists. “I am happiest when the artists I support get more attention from more people.” Students from this music school were building their own electric guitars from scratch, and some of them have already begun collaborating with some well known musicians on custom designs.

Children and adults alike came to a stop in front of this carefully crafted mosaic. Students from Aoyama Technical College, who challenged themselves to create art from materials that we use on a daily basis. In this case, straws: 100,000 of them, and it took nearly two months for the piece to be completed. 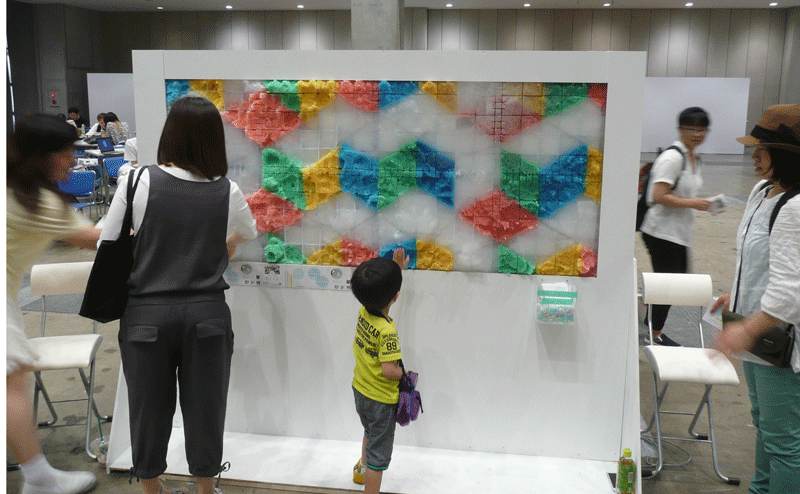 Keeping It in the Family

This mother-daughter team (the mother makes pieces with stained glass and the daughter makes pieces out of wood) put together a booth filled with items that were both aesthetically impressive and comfortable and calming at the same time. 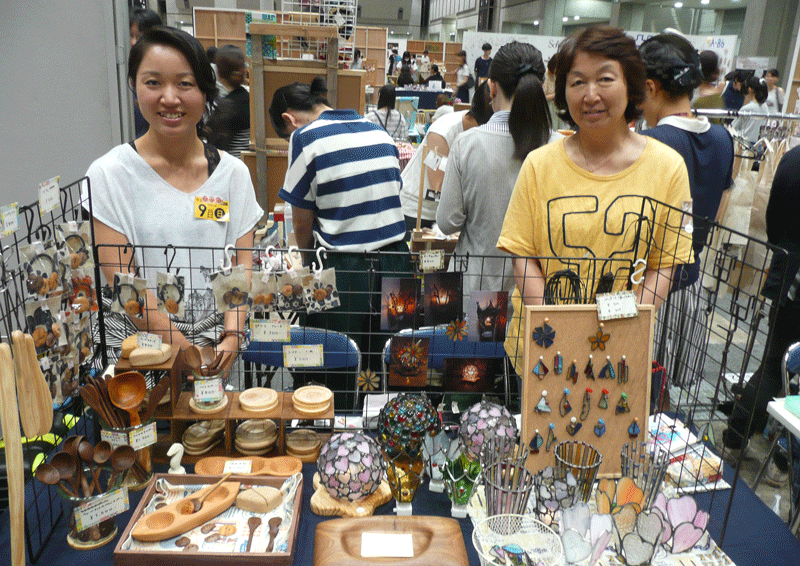 Live painting makes a frequent appearance at art and music events around town these days, but there probably aren’t too many live painters who actually use flowers instead of paintbrushes. You might ask yourself, “Just how well can you paint with flowers?” – but that would be the wrong question. 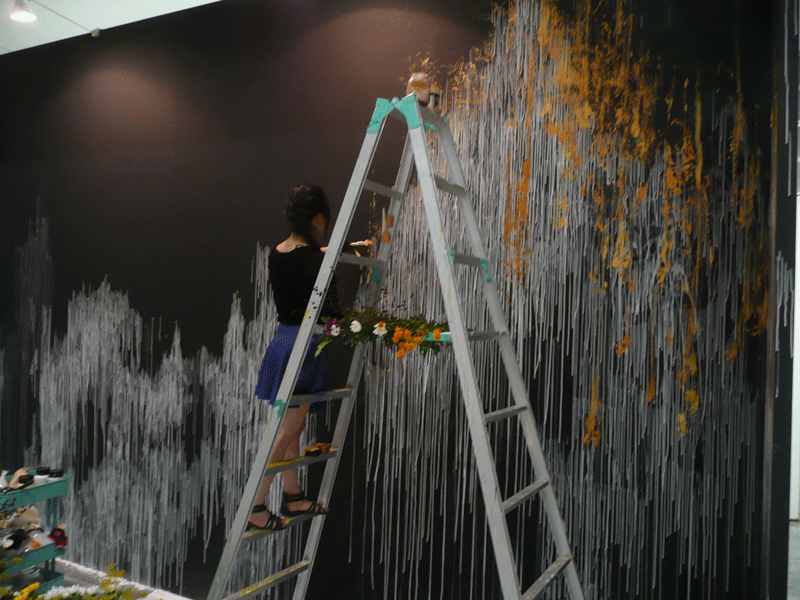 What sort of surprises will GAKUTEN have up its student sleeves in 2016? You’ll have to show up in order to find out, but in the meantime, you can drop in at Design Festa Vol. 42, which will be held on November 21 and 22. Meanwhile, the Design Festa Gallery in Harajuku is open throughout the year and features a constantly changing lineup of temporary exhibits, including its most popular annual event – Meow Exhibition, which celebrates its fifth trip ‘round the old scratching post next January.