The album cover sports a myriad of images of Edwards, each depicting a different dimension of his character. It means to reflect the name and premise of his album, his fourth including two previous EP releases under Edoya Music.

“I decided on ‘The Strange’ because people are taught from a young age what is beautiful and what is weird… people always try to [distance themselves] from what is strange in fear of being different. The separation turns into disdain and ultimately hatred because it’s uncomfortable. But, if you open your mind and pay attention to the way you react and recognize those emotions are because of what you were taught, you’ll be free to realize a lot of those things you thought were strange are actually beautiful.”

Edwards grew up on a farm in rural Oregon, and was accustomed to horseback riding, herding, and wrestling with his younger brother. Throughout high school, he participated in theater, thrived in history and literature classes, and quietly worked on song writing. “It’s always been my favorite process in music.” Years ago, he wasn’t as confident, and had a back-up plan to study business.

But he had to give singing a shot.

“I found myself suddenly singing in the biggest city in the world; I quickly saw that I carried a unique perspective, and yet, despite my background, I could connect with people through my music. Making connections is what I hope for most.”

Once he moved in with a host family in north Tokyo, Edwards spent his first summer – the entirety of his tourist visa – going to auditions, sending tapes, meeting with agents, and seeking out an artist contract. It took less than four months for him to partner with a company that provided the platform he sought.

He has since participated, and won in 3 instances, on the highly-rated “Nodo Jiman: Za! World” NTV program that features foreigners who sing in Japanese. The show helped launch his career and propel him into the hearts of fans across Japan. He has also acted on stage and in a movie, walked runways, and done numerous promotions. 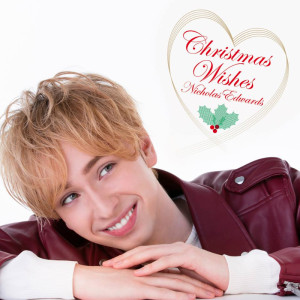 “Being an American and writing and singing songs in Japanese has given me an important goal – to help broaden minds and bring new perspectives to those who may never get the chance to experience it otherwise. I want to break barriers. If you take away the cultures that humanity creates, and strip people down, the way people feel doesn’t change between gender or race or ways of life.

Hearts are the same everywhere however the circumstance someone is born into.”

“The Strange” (two versions: “Blue” for all-English and “Red” for all-Japanese) launched online and in stores on October 21.
His next album, “Christmas Wishes” is due December 11, and will feature three original holiday songs, and four renditions of classics.

For more information about the tour, check his official site: http://www.nicholas-edwards.jp/event