At the age of five Diana Yukawa knew she had found her calling in life.

After pestering her mother for months she finally got the violin she desperately craved and almost immediately after receiving it astounded her teachers with her natural ability. She has gone on to release three successful solo albums, performed at esteemed venues like the Royal Albert Hall and the Hollywood Bowl, as well as collaborating with a number of high-profile stars such as Paul Oakenfold, Jeff Beck and Craig Armstrong.

In Japan she first came to the public’s attention in her mid-teens after an emotional performance at Mount Takamagahara, the site of the worst single-airplane disaster in history. She was playing for all the victims of Japan Air Lines Flight 123, but more significantly for her father, Akihisa Yukawa, who was also on board. Born a few weeks after the accident, Diana was back at the site last month, without her violin, to pay her respects to her dad. During her trip here she found time to meet up with Weekender to talk about the last thirty years, starting before she was even born.

The Death of my Father

If my mother [Susanne Bayly] hadn’t been heavily pregnant with me she would have been on the flight with my father. He’d apparently been uncharacteristically irritable that morning because he couldn’t get a seat on the Shinkansen as it was Obon. He came home for lunch with sushi, which was a bit unusual, then as he was leaving he held my sister Cassie’s hand and stroked mum’s belly saying “look after my last creation.” They said goodbye and that was it.

There was an unexplained blackout that evening. The electricity eventually came back and Cassie started watching her favorite show before it was interrupted by a newsflash. She called mum and asked if it was papa’s plane, but mum assumed a domestic flight wouldn’t be that big. Then the passenger list was leaked and the names came on the screen. My dad’s name came at the end. It was one of the only things mum could read in Japanese. The phone started ringing and from that point she says everything was just a blur. Dreaming of the Royal Albert Hall

I’ve learned a lot from my mum about my father. How funny, charming and handsome he was. Lots of people have told me the same things. I also know he wanted to be a pianist. It’s great that we had this passion for music in common, but that isn’t the reason I started playing the violin. From a very young age it was just an instrument I was really drawn to. I begged my mum for a long time to get me one. She gave in when I was five and as soon as I got it I fell in love. I dreamed of playing at the Royal Albert Hall. I knew it was what I wanted to do for the rest of my life. Around the age of six or seven my instructor said I was showing a lot of promise and that I should be taught by someone more qualified. I then went to the Royal College of Music where I learned from a real top professor. My debut concert with an orchestra was at the age of 11.

A Whirlwind of Emotions

I got noticed in Japan when I was 14. It was when I first went to the crash site, which was an overwhelming experience. It didn’t matter that I couldn’t speak the language, you could just feel the compassion amongst everyone. I played “Elegy” (a song whose lyrics were written by a man who lost his wife in the accident) and “Ue o Muite Arukou” by Kyu Sakamoto (who also died in the crash). There was a whirlwind of emotions going through my head. I was happy about all the things I wanted to tell my dad and then immensely sad as this beautiful location was the last place he was on earth. I find it very difficult to articulate my feelings so getting the violin out is the most natural thing for me to do because that is how I can really express myself. 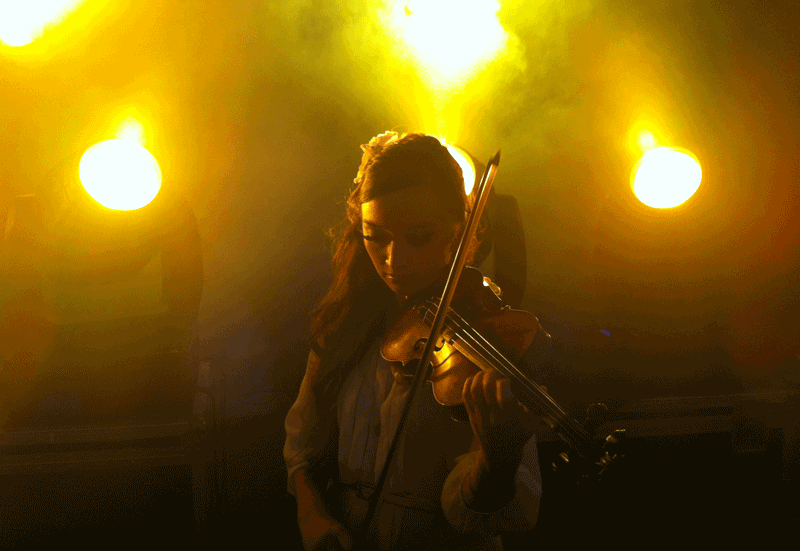 I released my first album “La Campanella” in Japan later that year and was just blown away by how successful it was. Reaching number one, seeing my face on magazine racks, having people come up to me and ask for my picture; it was a crazy time. Being so young probably helped me take it in my stride more because I was naive. It felt like my music was reaching people here. I spent so much time promoting the record in this country that it began to feel like home. It was released in the U.K. about a year later under the title “Elegy” and I just had the feeling then that I was treated more like a foreigner in England than I was in Japan. I remember going on (the BBC show) Blue Peter and the host Connie Huq asked me if I could speak English. I replied, “I hope so, it’s the only language I’ve ever spoken.” Being on that program, though, was one of the highlights of my youth, especially getting the badge.

I’ve had a number of high points in my career and been really fortunate to have played at some fantastic venues. To perform on stage at the Royal Albert Hall was my dream when I took up the violin so to be able to realize that was just incredible. Here in Japan I’ve played at a number of memorable locations, including an old temple which was a very powerful experience. Of course I love appearing at stadiums too. The Dubai World Cup Horse Race was pretty special; I think there was around 100,000 people there. Then there was the EMIR World Cup Final in Qatar. They were launching their logo for the 2022 bid. Despite all the controversy and problems that have happened since, it was something I really appreciated being part of. I was playing a cover of Robert Miles’ track “Children” and I could hear all the people chanting along. It was surreal.

Winging It with Paul Oakenfold

Another momentous setting for me was the Hollywood Bowl. I played there with Paul Oakenfold. He is crazy if I’m honest (laughs). It was one of the first times for me to perform on a non-classical platform. He turned up four hours late for rehearsal and after a short sound check said “let’s have a track that is bouncy with lots of energy.” OK, I don’t mind improvising, but can I at least hear it first and go through it a few times. He was like, I can’t play it to you. My producers told me just to wing it and pretend you’re having fun. I just listened for a bit then joined in when I could. I’m not sure how it sounded, but I felt it went well. It’s definitely not one I’ll ever forget.

I feel privileged to have had the chance to have worked with so many renowned artists. I mean Craig Armstrong was one of my biggest influences and inspirations. I felt like a fan meeting him. I think we worked well together, however, the track we did hasn’t been released yet. The same goes for the song I did with Jeff Beck. I never actually met him, we contacted each other via telephone and email. Our music seemed to blend together so well. We made this beautiful track, but missed the deadline so it is yet to find a home. We will get it out there someday.

Recently I’ve been collaborating with Benge and John Foxx—former lead singer of Ultravox. We are known as Ghost Harmonic and our album Codex came out earlier this year. I would describe it as modern electronic classical music. It’s very different to what I normally do and I’m really proud of it. When I was younger I was always doing classic repertoires that were in front of me, yet with this record everything was stripped away; we had to make our own rules.

Being classically trained I thought I wasn’t good enough to write so it was daunting. Reading some of the wonderful comments on Facebook and Twitter to something that I’d created was both humbling and really encouraging. The three of us come from different backgrounds, but things seemed to flow organically. We got on really well and they gave me a lot of freedom to do my thing. It felt like a clean slate. My past didn’t seem so attached to me. People have started seeing me purely as a musician rather than the girl who came from a disaster. A Constant Figure in My Life

That’s not to say I want to distance myself from the accident. Whenever there is an opportunity I want to remind people about the tragedy because we need to make sure those lives weren’t lost in vain and something like that never happens again. In the past I have gone up to the site on different anniversaries to play the violin and people have told me how moved they were, but I have never intended to send out a sad message. I want to celebrate my father’s memory and honor him in a positive way. I believe he would have wanted me to carry on and live a happy life.

This year I decided to do things a little differently, going up before the anniversary and without my violin. My husband Dan owns a fish & chip shop in Roppongi, so we brought an empty box up. I always carry a few little things such as pictures and CDs but never too much because I feel as though he knows everything that’s going on anyway. He’s a constant figure in my life.

The Diminishing Power of Record Labels

Looking forward I just hope to continue making songs that connect with people. I think that’s what the public wants; something that is real and honest. Music is changing. It’s becoming more accessible with fewer boundaries and is no longer defined by genre. As an artist you can now do much more on your own. It’s not just about getting signed by a major label and having them support and market you. I feel their power is diminishing. A couple of years ago I released an LP independently and felt really empowered by that. It is an exciting time to be part of this industry. I believe I am in a really good place at the moment, though that place would be even better if I got the chance to work with Massive Attack. They’re a group I’ve always wanted to collaborate with.