Japan’s biggest business news story for 2015 has been 144 years in the making.

Just this month, news hit that the social media service Snapchat, while arranging for another round of venture capital funding, was calling for a valuation of up to 19 billion dollars, which isn’t bad for a company whose business model is based pictures and videos that disappear shortly after they’ve been viewed. Drawing even more financial and media attention last September was the IPO of Chinese ecommerce platform Alibaba, with a world-record public offering of $21.8 billion and a market capitalization that currently stands at $221 billion.

These days, it seems hard to imagine that any company’s financial dealings will attract much attention, particularly in the mainstream media, without a strong online presence or some connection to the global zeitgeist (a cute name certainly doesn’t hurt either). So a company whose roots go back 144 years, and whose name alone—Japan Post—smacks of generations gone by is unlikely to draw much headline space. Nonetheless, this firm, which announced that it was going public at the end of 2014, is poised to take its place among of the world’s top IPOs in history. What’s more, even getting it to that position involved a shakeup at the highest level of Japanese government.

Like many of the political and social developments that attended the Meiji Restoration, Japan Post has its origins in an institution that Japan observed from overseas and imported back to its own shores. In 1870 Hisoka Maejima, who was born into a wealthy farming family in Niigata and whose political star was beginning to rise in Edo, was sent to Great Britain to learn about the General Post Office. Following his research, he returned home and created his proposal for the Japanese postal system. The Japanese Post Office system was inaugurated in April 1871, and the postal savings system was established four years later.

One of the crucial elements of Japan Post was the postmasters who ran the stations—sometimes out of their own homes or businesses. Maejima recognized that there was an entire class of men—mostly lower-tier members of the aristocracy—who had lost power with the abolishing of the samurai class, and one way to restore their dignity was by placing them in positions of responsibility—and eventually, authority.

As Patricia L. Maclachlan explains in an interview about her scholarly study, “The People’s Post Office: The History and Politics of the Japanese Postal System, 1871–2010,” the local postmasters who were the heart of the system didn’t get any tangible financial gain from their positions: “They provided these postal services free of charge. They drew no salary; they could gain a commission from the sale of postage stamps, but they did not become rich by becoming postmasters. They saw in the post office an opportunity to elevate their status.”

The Japan Post rapidly became more than a means of delivering letters and packages: through the financial clout of its savings system, it began to develop into a considerable financial power in its own right. People who previously had no secure means of managing their money did all of a sudden, and a popular means it was: by 1878, 10,000 postal savings accounts had been opened. The government began to invest the postal savings into the Ministry of Finance, and most of this investment went into government bonds. Pension payments began to be distributed by Japan Post in 1910, boosting the rate of deposits even further, reaching ¥10 billion by 1942. Meanwhile, Postal Life Insurance policies were inaugurated in 1916. To say that the Post Office was woven into the life of most Japanese people would not be an overstatement.

In the years following WWII, the money continued to pour in to Japan Post Savings accounts, reaching ¥1 trillion in 1960 and ¥100 trillion by 1985. And the postmasters, many of whom had inherited their businesses from their fathers and grandfathers, found themselves in new positions—those of the small-scale political boss.

Maclachlan explains that the association of the commissioned postmasters—the Zentoku—was a crucial part of vote-getting efforts for the Liberal Democratic Party. Particularly in rural Japan, the post office was a central location of daily life, and the influence of the postmasters, who were also likely to be running other important businesses in their communities, could be quite significant. Along with the Nogyo, or agricultural collectives, the Zentoku had a strong hand in keeping the LDP in power for decades after the war.

At the same time, the vast amount of money that was flowing into the postal savings system had been transformed into its own “get out the vote” drive. The government bonds in which the Japan Post savings were so heavily invested were used for public works projects that ranged from the possibly useful to potentially impractical, but the politicians who were able to secure those projects for their districts would have a popular project to point to that had been, in one sense, paid for by the very people who had voted them into office.

Breaking Up a Behemoth 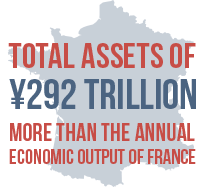 It was this history, and the trillions of yen behind it, that Prime Minister Junichiro Koizumi found himself facing when he began to make the push towards privatizing Japan Post in the early 2000s. (The impetus ran in the family, apparently—Koizumi’s grandfather was an early advocate of privatization, among other things.) The goal at the time was to reduce the size of the government and to spur on a flagging economy, but he would face significant hurdles in making this happen, including resistance from members of his own party—after all, the Japan Post was a strong pillar of support for the LDP, and a ready source of funding for pork barrel projects is not an easy thing for career politicians to relinquish.

By 2005, Koizumi’s cabinet had put forth their plan to break Japan Post into three separate companies—Postal Savings bank, Postal Life Insurance firm, and Postal Service—along with a fourth company that would act as a holding company for the three. The bills passed the lower house of Parliament in August, but were defeated in the upper house; in both houses, the bills faced resistance from Koizumi’s allies and enemies alike. Not one to be denied, Koizumi dissolved Parliament and held a new election, which his party won, and put the bills before a reconstituted Parliament, where it passed through both houses. A jubilant Koizumi told reporters, “This is a political miracle. Once I was thrown down to the bottom of a valley, but the people have pulled me up.”

Even following the gamesmanship that brought Koizumi the victory, it has taken some eight years since the founding of the Japan Post Holdings Company and the listing of its stocks on the market, which is slated to begin in the fall.

As befits a company of its size, the public offering will be a multi-stage affair, with several tranches being released onto the market over the next several years. Three companies will be listed simultaneously: Japan Post Bank, Japan Post Insurance, and Japan Post Holdings.

In a return to the historical practice of Japan Post funding going to support popular public works projects, much of the proceeds from the sales of stock will go to support reconstruction efforts that are still under way in areas of Japan that were hit in the 2011 earthquake and tsunami.

Many of the specifics of how Japan Post stock will be listed have yet to be announced, and there are more factors at play than can be considered in a small space. But two things will be interesting to observe in the runup to the listing and in the years to come. The first is whether there will be enough demand to absorb the sheer mass of shares that will be released onto the market, a concern that some foreign fund managers have already expressed.

When asked about this concern, Oleg Zuravljov, founder of the financial research firm Shared Research replied, “I think those fund managers misunderstand how the market works. In a market as big as Japan, at this stage of the bull market, the only important issue is price. However, if they’re smart they’ll market heavily to individuals through a preferred stock buyers program. That can create a lot of demand.” If this is the case, Japan Post Bank stock could become as popular a product as savings accounts were so many years ago.

The second factor to observe will be the fate of Japan Post’s original product. Of the three historical roles of the Japan Post, the postal service has fared the worst, succumbing as many national postal systems have to the rise of email and online transactions.

One answer may lie in going global. Last month, Japan Post picked up the Australian package delivery and logistics company Toll, for a cool $5.1 billion. This comes after the company entered into a joint venture with France’s GeoPost and Hong Kong’s Lenton Group to build a global delivery network. Could Maejima’s creation someday rival major players FedEx or UPS in the next decade? Only time will tell what Japan Post has to deliver.

Why Was Everyone in Japan Baking Bread During the Lockdown?
TW Asked, You Answered: “What’s the First Thing You Want To Do After The Pandemic Is Over?”
Life in Japan Post-COVID-19: What can we expect?
[Update] Tokyo’s State of Emergency Ends: How It Affects You