Tuned in Tokyo: Six Essential Apps for the Tokyoite

Love it or hate it, one of the most common phrases you hear these days to solve any problem you may have is—not to worry, “there’s an app for that.”

With the flick a finger you can find a delicious restaurant that suits your style, read their Japanese menu hassle-free, and follow it up with a spontaneous trip to a nearby onsen before heading to the best night out in Tokyo. Sound good? We checked in with the the developers of six apps that will help you dip into Japanese culture, and the life and soul of Tokyo, all from the convenience of your smartphone’s screen. Described as an app that “provides every option for nightlife in Tokyo,” it is the only app with such an extensive amount of options that suggests places based upon your GPS. Share your location with your friends to make sure the night goes smoothly as planned.

How did you come up with the concept?
I noticed a pattern in going out with friends and family in Tokyo. Bar, club, karaoke: it doesn’t really matter what order you do all these things in. It’s a simple fact that, in most cases, this is what people do at night in Tokyo.

What are the challenges in the Japanese app market?
Language, simply. Foreigners want English only and Japanese people want it in their native language. The challenge is that some of the information provided from the clubs, bars, and karaoke are all in Japanese. Our app has both, which makes everyone happy. Developed by an Onsen-lover for Onsen-lovers, this app locates your nearest bathing spot in Tokyo in three seconds. It’s also the only Onsen app that allows you to mark those that you’ve already visited, taken from personal experience of using a traditional Onsen pilgrimage stamp book.

How long did it take from the idea up until the launch?
The idea existed from 2010, as soon as the iPhone came out. I taught myself how to program and make apps, and began working on it in 2012. However, as soon as I started collecting data and other initial information, another app company released an Onsen app. It was quite a shock for me, and I stopped working on it altogether until the beginning of this year. You could say that overall it took a four long years to release the app.

Can you describe the app in 3 words?
A “collaboration” of “tradition” and “new-technology.”

Note: This app can be downloaded by searching Tokyo Sento Map Not your standard cooking recipe app: highly aesthetic, the app is put together with 100% hand-drawn photorealistic illustrations of food and cooking utensils to teach you everything from the basics to the making of sushi. Inspired by the Japanese philosophy of working on a skill over and over to perfection, the team of German developers wanted to provide sushi-newbies and passionate experts a look into this highly interesting topic.

What is special about this app?
We wanted to clearly distinguish ourselves from other sushi apps, and do justice to the art behind the theme sushi itself. We looked beyond the plate and really worked with the topic. Step away from the fancy “California Rolls” and you see that the art of brilliant sushi also lies in its simplicity. This doesn’t mean that the making of it is simple, but more that the result is excellent in what it’s meant to be: a valuable product.

Can you describe the app in 3 words?
All about (classic) sushi. 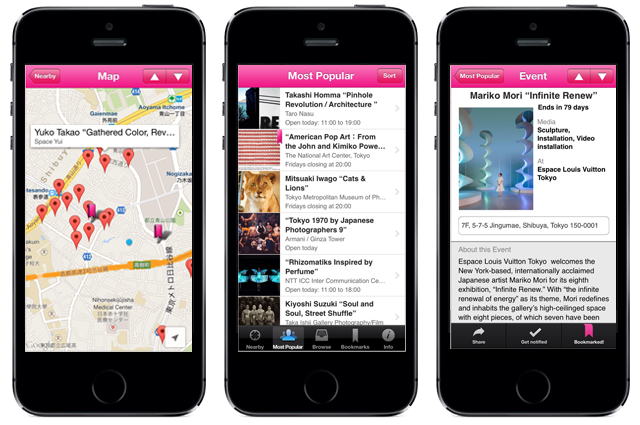 There is always something going on nearby: you just don’t hear about it all. Tokyo Art Beat shows you all sorts of exhibitions and galleries around you. With the ability to sort by popularity, media and dates, you can be as vague or as specific as you like when searching. Use it for a cultured day to stroll around town, or a quick lunch time inspiration, to appreciate the various forms of arts on show.

What was the inspiration behind the app?
10 years ago, it was really hard to find information in English and Japanese on what events were going on in Tokyo. We decided to build the ultimate source of information for everyone to enjoy.

What are the challenges in the Japanese app market?
The challenge is the same as other markets: visibility. We had the advantage of already having a big art community when we launched the app, so it was easy to promote it to a wide number of people when it was released. Ever walk down the street in Tokyo and wonder what a particular word on a signboard says in Japanese? Without knowing how to write it down or look it up in the dictionary, there isn’t much that you can do – unless, you use Waygo. Just point your phone camera at the text and it will translate it for you!

What is your favorite feature about this app?
The ability to point at something and learn not only what it means, but how to pronounce it. This comes in handy for learning in the real world.

What kind of app/user trends do you forecast in the near future?
Increased competition for attention. It is already a fairly crowded market and will continue to be so. One challenge is to build a truly useful app, but also build ways for the user to remember to use it if it isn’t used very often.

Note: This app can be downloaded by searching Translator Abroad Make your favorite restaurants and bars a part of you by creating your personal social card full of recommendations to share with your friends. Categorize them by type, rank them by ratings and discover even more places that like-minded people endorse and frequent. Social media meets restaurant guide.

What was the inspiration behind the app?
A lot of sites and apps try to be directories where they catalog everything, and I don’t think that is necessary anymore. People want to find the place that matches their lifestyle. So I figured we could match those shops and places with the people that like them. Where we like to go already is just as much part of our identity as what we want to find out next.

What is special about the app?
People talk about the “hippest places” around, but that isn’t key. It’s about whether it fits you and your interests. The app is trying to personalize locations and the real world around you.

5 Ways To Keep The Spark Alive With Your Partner During Stressful Times
15 Places in Tokyo That are Opening This Week
15 Audiobooks to Listen to on Your Post-Lockdown Japan Commute
Conquering a Fear of the Unknown: The Psychology Behind Covid-19 Anxiety and How to Cope With It

COVID-19 in Japan: Daily Updates
‘Terrace House’ Star Hana Kimura Dies At 22 Shortly After Posting a ‘Goodbye’ Message on Instagram
All You Need to Know About How to Receive Your Covid-19 ¥100,000 Stimulus from the Government
“Art Saves Lives”: International Artists Stranded in Tokyo Try to Change the Narrative of a Worldwide Coronavirus Pandemic