Imagine having a bad day and finding a bouquet of flowers parachute down into your lap from the sky. If you’re in Nevada, that could very well be reality, as the skies above that US state are where Japanese artist Makoto Azuma is launching plants into space for his latest project, called Exbiotanica.

Makoto Azuma, known for his plant and botanical installations around Japan, has an impressive portfolio working with top designers and luxury spaces for Isetan, Hermès, Champagne maker Perrier-Jouët, Toranomon and Roppongi Hills, and many more.

For his newest project, which will be turned into an exhibition next year, the Tokyo-based artist teamed up with Sacramento-based company, JP Aerospace, to create photos of a variety of plants sent close to 30,000 meters—30 km or 18 miles—up into the air in minus 50 degrees Celsius conditions.

Using Fuji still cameras and six GoPro video cameras, thirty varieties of plants and a bonsai tree’s trip up into space was documented, while the special helium balloon suspended them high up into space with a backdrop of the Earth.

Exbiotanica, according to Azuma’s official Facebook page, is a project that “aims to let a plant ‘step into’ the unknown territory that is outside of Earth.”

“EXBIOTANICA is a documentary project that captures the series of scenes and events, including the state of the plant freed from the ground and confronting with Earth, to the very moment that it returns to the soil.”

Starting in the middle of the night at 2 am in Black Rock Desert, Nevada, Makoto Azuma and his team prepared the launch by attaching a light metal frame to the plants. Along with the plants, cameras, and frame, two tracking devices were attached to record the distance and altitude traveled and to track the plants down once they came back to earth.

According to the photographer of the project, Naoyuki Noda, finding the right balance of equipment was a challenge. “Since there was a strict weight limit for loaded items, it was a continuous process of trial and error to choose the shooting [equipment] and settings, based on [our] experiences and [the] estimation of unknown[s],” he says.

After hours of preparation, the first plant was launched into space at 6:30 am, capturing these stunning photos: 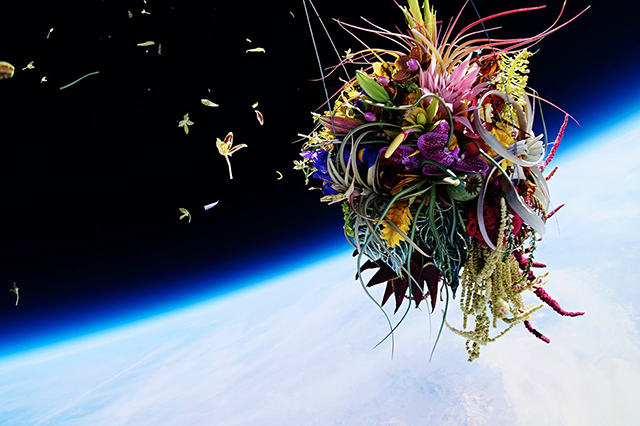